8 Ways to Improve the Tax Code 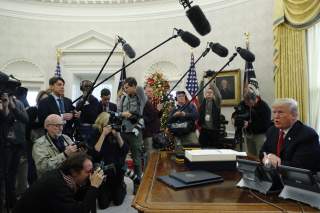 Republicans were pleased when they passed their tax bill last month because—at long last—they had achieved a legislative accomplishment. The corporate tax rate has been slashed from 35 to 21 percent and most individual taxpayers will also see a decrease in their tax liability, at least for a few years. In addition, the Act to provide for reconciliation pursuant to titles II and V of the concurrent resolution on the budget for fiscal year 2018 drastically limits the taxation of overseas corporate income and offers a new deduction for recipients of certain pass-through business income.

Unfortunately, the new law does not address many of the U.S. tax code’s negative features and it even introduces new imperfections. Perhaps this year Congress will address these problems. So here we go—eight suggestions for tax reform in 2018.

Let’s start with a modest suggestion. The Senate version of the tax bill helpfully and justly eliminated the marriage penalty by making the brackets for married couples twice as wide as those for single individuals. Unfortunately the conference version then added to that a feature that originated with from the House bill—a $10,000 limit on the deductibility of state and local taxes (SALT). That limit applies to both individuals and couples, effectively reducing the value of this deduction to married couples. In addition to penalizing marriage, the common limit makes individuals much more likely than couples to claim itemized deductions, which will make things like purchasing a home and giving to charity more attractive to singles than to married couples. There are two obvious ways to fix this: increase the limit for married couples or reduce it for singles.

To continue on the topic of state and local taxes, the new cap on the individual SALT deduction introduces an asymmetry in how these taxes are treated at the federal level that depends on whether firms or individuals pay them. If states respond to the incentives offered by the federal deduction—which is part of the rationale for capping the SALT deduction in the first place—then we should expect states to shift toward taxing business income instead of personal income—the opposite of what the rest of the new tax law seeks to accomplish. States are already discussing doing precisely that.

Perhaps the most unfortunate feature of the tax law is the new 20 percent deduction for certain pass-through business income. This business income—from sole proprietorships, partnerships, LLCs and S corporations—is not subject to the corporate tax. Instead, it is passed through to the owner’s individual tax return and taxed under individual tax rules. The new deduction lowers the effective tax rate on such income by one-fifth for taxpayers who make less than $315,000, as well as for higher-income taxpayers who generate this income in a set of preferred industries and employ employees or own certain assets. The new rules will steer economic activity toward the preferred industries and activities, generally those not dominated by skilled professionals. It will also favor independent contracting over employment relationships, and it will induce businesses to purchase instead of lease office space. This is a particularly egregious form of industrial policy: not only does it select winning and losing industries, it also selects winning and losing organizational structures. The main rationale for the deduction is that pass-through businesses deserved a tax cut because the tax rate of C corporations is being reduced from 35 to 21 percent. But pass-through businesses could simply choose to become C corporations if that had truly become more attractive.

On that note, it is true that C corporations have become a lot more attractive. The top individual income tax rate is now 16 percentage points higher than the corporate tax rate, and the difference is even larger if we include the unlimited deductibility of corporate state and local taxes. Moving wage and investment income to a C corporation has therefore become quite attractive; under the right circumstances, individuals will be able to avoid, not just delay, paying the second layer of corporate taxes (dividend and capital gains taxes) entirely. Much stronger rules, or a reduction of the rate differential, could alleviate this problem.

Broaden the Individual Tax Base

Going back to the individual SALT cap, let’s consider a bold reform. Although the new SALT limitation may have been motivated by the desire of Republicans to penalize blue states, it does further the classic tax reform goal of broadening the federal income tax base. The new law also tightens the limit on the mortgage interest deduction. But it does not touch the (by far) largest tax expenditure: the tax subsidy for employer-provided health insurance. In addition, it expands another big one: the child tax credit. One way to limit these popular loopholes would be to impose an overall cap on credits and deductions. Martin Feldstein has proposed limiting overall tax expenditures for a given taxpayer to 2 percent of taxable income, but other limits are possible. As a side benefit, this would prevent state and local governments from gaming the system by allowing taxpayers to donate to quasi-public charities and to receive a credit for such donations against their state and local taxes.

Now for an even more ambitious proposal: let’s make the tax code permanent. There have been a number of expiring provisions that are renewed every year or every few years for quite some time now, and such provisions, while generating employment for lobbyists, generate unhelpful uncertainty for businesses and households alike. The new law exacerbates this problem. Perhaps the clearest example of this is the temporary nature of most of the changes to the individual tax code, but the faux phase-out is a commonly deployed budget gimmick. Stop it!

Tax-preferred saving vehicles, such as the 401(k)s, HSAs and 529s, have gone a long way in moving the United States toward a system of consumption taxation as opposed to income taxation because they allow many taxpayers to shield quite a bit of their capital income from taxation. Sadly, these accounts have different rules and limits and some of them require the cooperation of employers. Making simplified saving vehicles available to all taxpayers would advance equity and efficiency.

What about That Postcard?

When Republicans started touting their tax-reform efforts, they promised that taxpayers would be able to use a postcard to file their taxes, in large part because the number of individual tax brackets would be reduced from seven to three. That postcard option did not materialize: the final bill kept seven brackets. That means filing your taxes will cost exactly the same amount of time and effort as it did before. Just kidding: we have computers now, and changing the number of brackets should never be a policy priority.

Stan Veuger is an economist at the American Enterprise Institute.

Image: U.S. President Donald Trump sits at his desk while signing the $1.5 trillion tax overhaul plan along with a short-term government spending bill in the Oval Office of the White House in Washington, U.S., December 22, 2017. REUTERS/Jonathan Ernst