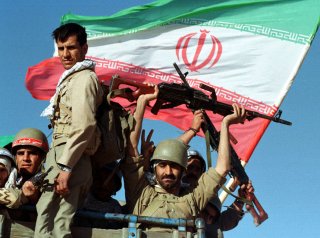 AMERICAN RELATIONS with Iran have reached rock bottom. Once upon a time, the U.S. secretary of state could call his Iranian counterpart on the phone to avert a budding crisis. Now, all that is gone. Following Donald Trump’s May 2018 decision to withdraw the United States from the Joint Comprehensive Plan of Action (JCPOA), the reinstatement of U.S. economic sanctions on Iran—the so-called “maximum pressure” campaign—has pushed the Iranians to renege on several of their nuclear commitments. Iran’s capability to build a nuclear weapon is now more advanced than at any time since the JCPOA was signed. Although Tehran has signaled that its steps towards a bomb are reversible if the United States returns to the deal, its steady progress towards increasingly advanced ballistic missiles is intensifying the deleterious consequences of delay and inaction.

These tensions have boiled over on numerous occasions, and Iran and the United States have nearly gone to war three times since June 2019. During the most recent incident last January, when the United States assassinated Qassim Suleimani, the Iranian major general who commanded Tehran’s Islamic Revolutionary Guards Corps’ (IRGC) Quds Force, Iran responded with ballistic missile attacks from its own territory—a first for Tehran—injuring 109 U.S. soldiers. Additional attacks by Iranian-backed proxies against U.S. personnel in Iraq throughout the spring and summer have become all too frequent, and a disclosure in September that Iran is allegedly weighing the assassination of the U.S. ambassador to South Africa has made it apparent that, in contrast to statements by Trump administration and U.S. military officials, Iran has not been deterred.

It is quite possible that further Iranian reprisals or provocations by either party could occur before the end of the year. Indeed, it is likely that tensions increase further if Trump is reelected on November 3, as Tehran will have no way to extricate itself from his maximum pressure stranglehold without capitulating, and Iran’s restraint thus far suggests that it is hedging its bets on a Democratic victory in November that will return the United States to the internationally-sanctioned diplomatic route. If that gamble falters, all bets are off.

To avoid a direct clash between Washington and Tehran in the Middle East, it is urgent that the United States rethink its Iran policy. Washington must recognize that Iran, far from being the resolute foe its staunchest critics contend, often exhibits political flexibility in addressing national security threats and has regularly sought dialogue with the United States. An examination of the post-9/11 era reveals that U.S.-Iranian cooperation has yielded valuable, yet imperfect, results when mutual national security interests coincided, even though both Washington and Tehran failed to leverage these moments to jumpstart a broader reconciliation. To make the Middle East safer, Washington must talk with Iran.

THERE IS a long history of turmoil between Iran and America, especially this century. Iran’s persistent support for terrorism and general anti-Americanism made it no friend of the George W. Bush White House. However, the administration’s posture was initially unfocused: rhetorically hostile, but politically ambivalent. The 9/11 terror attacks changed that; a young administration found its calling, and Iran became relevant to the Pentagon’s budding crusade to root out terror threats emanating from the Middle East.

The U.S. invasion of Afghanistan vouchsafed Iran an unprecedented opportunity to eliminate its foe in Kandahar. Throughout the 1990s, Tehran and the Sunni Taliban had sparred over the latter’s persecution of Afghanistan’s Shia minority and rampant drug smuggling that was imperiling Iran’s eastern provinces. In 1998, Tehran had nearly invaded Afghanistan after the Taliban killed nine Iranian diplomats in the northern city of Mazar-i-Sharif. Iran and America were both out for Taliban blood.

In an interview with The New Yorker, veteran U.S. diplomat Ryan Crocker remembers how, in the months after the 9/11 attacks, he flew to Geneva, Switzerland, and Paris, France as the deputy assistant secretary of state for Near Eastern Affairs for a series of discrete meetings with Iranian diplomats. With Qassim Suleimani’s consent, the Iranians eagerly assisted the U.S. campaign by, Brookings scholar Suzanne Maloney details, permitting the United States to transit Iranian airspace, helping Washington establish logistical supply lines, and leveraging its well-established contacts with the Taliban’s chief Afghan opponent, the Northern Alliance. Crocker recalls that Iranian negotiators disclosed the locations of Taliban military forces and even handed over an Al Qaeda operative who had been hiding in Iran. Although Iran would later refuse to turn over a handful of senior Al Qaeda members to the United States, Hillary Mann Leverett, a U.S. foreign service officer who joined Crocker in those meetings, testified to the House Committee on Oversight and Government Reform in 2007 that Iran deported “hundreds of al Qaeda and Taliban figures seeking to flee Afghanistan to or through Iran” back to their countries of origin.

Crocker was not the only U.S. contact who met with Iranians on Afghanistan. In early December 2001, U.S. special representative to the Afghan opposition James F. Dobbins and Zalmay Khalilzad, a native Afghan who was then the U.S. presidential envoy to Afghanistan, also spoke to Iranian diplomats in Bonn, Germany during the UN conference to form Afghanistan’s transitional government. As Khalilzad reports in his 2016 book, The Envoy: From Kabul To The White House, My Journey Through A Turbulent World, Mohammad Javad Zarif, Iran’s current foreign minister who was then the deputy foreign minister, reached out to Dobbins to discuss the forthcoming accord. After an initial meeting, the two U.S. diplomats began having a daily coffee with Zarif and Muhammad Ibrahim Taherian, the Iranian ambassador to the Northern Alliance. The sessions were rewarding, both in building rapport between Khalilzad and Zarif that would bear fruit in America’s incipient invasion of Iraq, and in attaining essential Iranian support for an interim government led by future Afghan president Hamid Karzai. Dobbins later praised Iranian participation in the United States Institute for Peace’s Iran Primer, describing Iran’s “major contribution” in overcoming the final hurdle to the Bonn Agreement’s adoption, and its “highly constructive role” in writing the first draft of the Afghan interim constitution—where Tehran unexpectedly requested that democratic elections be codified in writing and Afghans commit to fighting international terrorism.

On November 13, 2001, U.S. secretary of state Colin Powell and the Iranian foreign minister shook hands at UN headquarters in New York for the first time, lending fleeting credibility to a façade of warming U.S-Iran ties. But it was not to last. The Bush administration’s “Freedom Agenda,” which imbued Washington with a yearning for forceful democratic proselytizing, regarded Iran disdainfully, and existing regional disagreements such as Israel-Palestine soured relations. President Bush soon branded Iran as a member of the “Axis of Evil” in his 2002 State of the Union address, engendering a furious reaction from a slighted Iranian nation and leading Supreme Leader Ali Khamenei to label America “the devil incarnate” for the first time. Crocker asserts that Bush’s speech discredited the idea of a broader rapprochement with Washington among Iranian hardliners, lamenting that Suleimani’s prior musing that “maybe it’s time to rethink our relationship with the Americans” died that day on the floor of the U.S. House of Representatives. “One word in one speech changed history,” he said. Nonetheless, negotiations endured, which, Maloney observed, proved that Iran had “demonstrated its capacity to prioritize interests over outrage or ideology.” Mutual security concerns trumped political enmity; Iran and America’s unhappy marriage persevered.

DISCLOSURES ABOUT Iran’s clandestine nuclear program in August 2002 sent tremors through the Bush White House, but the United States neither interrupted consultations with Iran over Afghanistan nor prevented the talks’ extension to Iraq. By the spring of 2003, it had become apparent that the Bush administration was preparing to topple Saddam Hussein, and Crocker and Khalilzad worked in tandem to parley with Iran, Hussein’s stalwart enemy, about the future of post-Baathist Iraq. As Khalilzad recounts in his engrossing memoir, The Envoy, he soon spoke to Zarif, his former Iranian interlocutor, once again. Zarif, now UN ambassador, was, like many Iranians, concerned that Iran was next on the Pentagon’s short list. Khalilzad told Zarif that the United States had no plans to topple the Iranian government, but Washington wanted assurances that U.S. aircraft that strayed into Iranian airspace would not be fired upon. Further, Khalilzad wanted Tehran’s appraisal of how Iraqis would react to Saddam’s deposal. Zarif gave him both and more: Tehran accepted the request for deconfliction but warned that a U.S. occupation of Iraq would be unacceptable and produce significant instability, which was somewhat inevitable following Hussein’s ouster. The talks continued through the U.S. invasion, only reaching an impasse when the Bush administration refused Tehran’s proposal to swap the Iraqi-based leadership of Iranian opposition group Mujahedin-e Khalq, a U.S.-designated terrorist group, for Al Qaeda members residing in Iran. This standoff essentially froze what had become an effective bilateral diplomatic channel.

Washington’s nascent reconciliation with Tehran collapsed after a May 12 terrorist attack in Saudi Arabia, which killed thirty-five people, including eight Americans, was linked to Iran-based Al Qaeda. It could not have come at a worse time. A week earlier, Swiss ambassador to Tehran Tim Guldimann, whose embassy represents the United States in the Islamic Republic, had faxed a two-page document to the U.S. State Department outlining a potential “grand bargain” between the United States and Iran. Everything was on the table, Guldimann wrote, from Iran’s nuclear program to stances on Israel and proxy groups—with the purported backing of Supreme Leader Khamenei.