Abandoning the Iran Deal Is Just One Example of Irrational U.S. Diplomacy 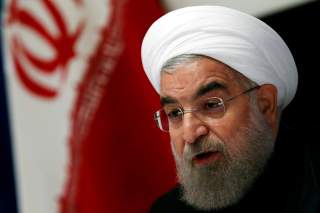 All signs indicate that President Trump will rescind Washington’s adherence to the nuclear agreement reached between the leading international powers and Iran in 2015. That agreement, the Joint Comprehensive Plan of Action (JCPOA), placed significant restrictions on Tehran’s nuclear program—at the very least greatly slowing any quest for a nuclear-weapons capability. Nevertheless, hawks in the United States have excoriated the deal from the very beginning, arguing that Iran was merely buying time and lulling a gullible Obama administration and other governments into complacency while continuing to covertly develop its nuclear capabilities. During the 2016 presidential-election campaign, Trump himself repeatedly blasted the JCPOA as the “worst deal ever negotiated.” Other opponents equated the agreement with Neville Chamberlain’s appeasement of Nazi Germany at Munich in 1938.

The hostility to the JCPOA is merely the latest manifestation of an unhealthy lack of prudence and realism in U.S. foreign policy on so many issues. Washington’s approach is characterized too often by impossible objectives, boorish, ham-handed diplomacy, and an unwillingness to make even the most imperative concessions to achieve success.

The reality is that the JCPOA was probably the best deal that the United States and the other signatories could hope to get from any Iranian government. Indeed, it is surprising that Tehran was willing to accept even those restrictions. And despite allegations from opponents that Iran is violating the terms of the deal, the International Atomic Energy Agency continues to certify that Tehran is in compliance. Until now, even the Trump administration has had to concede, however grudgingly, that Iran has abided by the JCPOA’s requirements. Admittedly, the president did grouse that the Iranians were violating “the spirit” of the agreement, whatever that meant.

JCPOA supporters warn that trashing the accord will create horrid dilemmas for the United States. The likelihood is that Tehran would resume its full nuclear development program. U.S. leaders might then face the choice of accepting Iran as a nuclear-weapons power within a few years or launching a preemptive war to thwart that outcome.

Most JCPOA critics deny that they are pushing for a war against Iran—although there are exceptions, including Sen. Tom Cotton. Less brazen types insist that they simply want “a better deal”—one that would impose far more rigorous restraints on Iran. Even if such individuals are sincere—and there are substantial reasons to doubt their sincerity—pressing for a so-called better deal reflects the lack of realism that has plagued overall U.S. foreign policy in recent decades.

The only reason that negotiators were able to conclude the JCPOA with Tehran was because they backed off from some of their original demands. Hardliners (especially in the United States) wanted Iran to have no nuclear capabilities whatever—not even the technology appropriate for developing peaceful nuclear energy. The usual flock of hawks also wanted any agreement to include a virtual ban on ballistic-missile development and a commitment from Tehran to abandon its support of Hezbollah and other “terrorist movements.” Indeed, critics still insist on those points. Had negotiators demanded such concessions, however, there never would have been a JCPOA.

Unfortunately, the lack of prudent realism that hawkish types continue to exhibit regarding policy toward Iran is not confined to that issue. Too often, U.S. officials and much of the foreign-policy community act as though the only legitimate diplomacy consists of making a laundry list of maximalist demands to a foreign government—usually without offering any meaningful concessions in return. That scenario has played out in recent years regarding policy toward both North Korea and Russia.

Since the mid-1990s, Washington has insisted that Pyongyang abandon its entire nuclear program. Given the U.S. track record of forcible regime change against nonnuclear adversaries like Serbia, Iraq and Libya, Pyongyang was not inclined to rely on vacuous assurances that the United States would refrain from trying to achieve the same outcome in North Korea. Moreover, Washington’s proposed substantive concessions to Pyongyang consisted of little more than vague promises of a partial lifting of the economic sanctions that had been imposed. There never has been a clear willingness to address the North Korean regime’s other goals—including a peace treaty formally ending the Korean War, U.S. diplomatic recognition of the regime, and the end to Washington’s annual joint-military exercises with South Korea.

Insisting on Pyongyang’s return to nuclear virginity, especially without offering major concessions, was not very realistic even before North Korea conducted multiple nuclear and ballistic-missile tests. Once developments reached that point and it was clear that the country already had built a number of nuclear weapons, U.S. policy became totally unmoored from reality. Yet there is little indication that the Trump administration has softened Washington’s negotiating strategy. Instead, the U.S. position has hardened and become worrisomely belligerent.

Both the Obama and Trump administrations have pursued a similar futile, uncompromising stance toward Russia. The recent sanctions legislation that Congress overwhelmingly passed and that the president signed into law epitomizes that rigid, unproductive attitude. Among other provisions, the measure cited Moscow’s alleged interference in America’s 2016 election as a justification for imposing tighter sanctions. But the legislation offers no hint of how Russia could atone for that offense and get the sanctions lifted. Would a written pledge never to engage in such conduct in future elections be sufficient? Would something additional be necessary? There is no way to tell.

In addition, the sanctions law codifies the previous White House demands during the Obama and Trump administrations that the Kremlin cease supporting separatist rebels in eastern Ukraine and return the Crimea Peninsula to Kiev’s control. Russia’s compliance with the former demand is unlikely, especially given the Russian government’s well-founded fears that the United States intends to turn Ukraine into a Western client state with membership in both the European Union and NATO. Brazen Western meddling in Ukraine’s political affairs to help demonstrators unseat the democratically elected, pro-Russian president in 2014 certainly does not incline Moscow to soften its policy toward its neighbor.

Demanding that Moscow relinquish control of Crimea is even more of a diplomatic nonstarter. The Kremlin will abandon that acquisition at about the same time that Israel rescinds its annexation of Syria’s Golan Heights or Turkey repudiates its puppet Turkish Republic of Northern Cyprus and returns that occupied territory to the Republic of Cyprus. That is to say, a Russian capitulation on the Crimea issue likely will never take place.

Such examples underscore that Washington’s overall diplomacy is dangerously unrealistic on multiple fronts. More restrained and modest strategies are badly needed. A good place to start is to refrain from torpedoing the constructive and beneficial JCPOA. There is no “better agreement” in the offing, and the consequences of pursuing such a mirage could be very unpleasant—not only for the Middle East, but the United States as well.