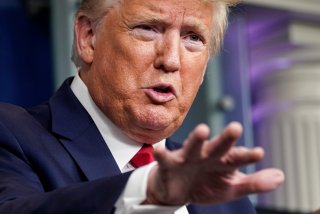 Donald Trump withdrew the United States from the World Health Organization barely eleven days after giving it thirty days to make “major substantive improvements.” He never specified the improvements, nor gave the WHO time to make them, since his objective, as with the pandemic itself, is to fix the blame, not the problem. That is a costly mistake, for it is in the United States—and the world’s—interest to reform, not abandon, the WHO.

Trump has charged that the WHO, under Director-General Dr. Tedros Adhanom Ghebreyesus, was too slow to declare a public health emergency, too late to label it a pandemic, and too fast to laud China for its response. None of which absolves the Trump administration’s own foot-dragging, for White House memos had earlier warned of the threat. Nevertheless, while the WHO may not have reacted altogether wisely or well, the fault lies largely not in Tedros or the secretariat, but in the structure of the WHO. Whereas the U.S. response to the pandemic has been arguably leaderless, the WHO is virtually leader proof.

Created in 1948 as the UN’s global health agency, the WHO is a member-driven organization, whose 194 member states convene as the World Health Assembly to set policy and direction. It is divided into a headquarters staff in Geneva and six semi-autonomous regional offices, whose heads are elected by the member states. As a result, the director-general and the secretariat have limited freedom to exercise independent leadership.

The WHO is not a first responder. Rather, it is a coordinating and advisory body, advocating for disease control efforts, such as those on polio, HIV, and cervical cancer, while also collecting data, issuing guidance, and providing technical assistance. For these activities, the WHO is heavily dependent on information from its member states, which include both transparent democracies and opaque autocracies, like China and Russia.

As a result, the WHO has always struggled to secure the cooperation of its member states, while also holding them accountable. It did this effectively during the SARS outbreak in 2003, when it criticized China for a lack of transparency, but not in February when a WHO team and Chinese authorities jointly evaluated China’s coronavirus response.

The WHO’s other major weakness is that it is grossly underfunded, with a 2020–2021 budget of $4.8 billion—about the same as a large U.S. hospital. The United States accounts for about one-fifth of its funding, while until the pandemic, China contributed roughly 1 percent, hardly making it a China-centric organization.

The chronic underfunding is exacerbated by the fact that it comes from two sources: assessed contributions or dues, which provide flexible funding, and voluntary donations, which are earmarked for specific activities—and which now account for over 80 percent of the total. The result, wholly apart from ever-proliferating priorities, is that the WHO controls only a fraction of its already inadequate budget.

Trump’s actions—withdrawing and redirecting funds to unspecified “global public health needs”—will neither solve these problems nor advance U.S. interests. Defunding the WHO weakens it at the very moment it needs to be strengthened to stop the spread of the coronavirus. Rerouting funding to various NGOs would further fragment a response that demands better coordination. And abandoning the WHO would either advantage China, which recently announced to member states that it would contribute $2 billion to fight the pandemic, or, worse, embolden it to create a competing health organization, leveraging its position astride the global medical supply chain.

The better route is to reform the WHO, for the coronavirus has shown that a global pandemic demands a coordinated global response. In the absence of U.S. leadership, the EU, Japan, and other like-minded countries could spearhead a multilateral effort to fund a shortfall of $1.3 billion needed to address the pandemic this year, especially in the poorest countries. This will help provide a bulwark against blowback from a new wave of the coronavirus.

These same countries could also champion a substantial increase in assessed contributions, either by making common cause with China or leading by example. This would both boost the budget and give the WHO more control over it, providing increased freedom and flexibility to respond swiftly to emergencies.

These would be steps in the right direction, but they fall short of the fundamental reform—of funding, structure, governance, and priorities—needed to strengthen the WHO’s ability to lead in a crisis. The solution could be for the EU, Japan, and others to leverage the G7 and the G20 to charge UN Secretary-General António Guterres with appointing a high-level commission to recommend reforms, with a view to empowering the WHO with the needed authority and resources to combat this pandemic—and the next. If Trump were serious about wanting major substantive improvements, then this could be a way to achieve that.

The commission could be comprised of senior statespersons and former heads of relevant multilateral organizations, such as the World Bank and the Global Fund to Fight AIDS, Tuberculosis and Malaria. Their task would not be easy, especially to produce a reform agenda upon which the United States, China, and others could find common ground. But their mission would be clear: fix the problem, not the blame.