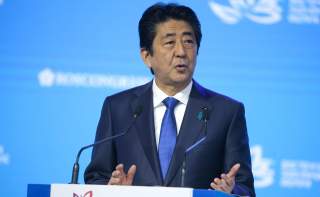 Critics have been eager to stick the knife into Japan’s Abenomics over its slow progress on reforms and sluggish growth rate. But eyeing an extended term in office, Japanese prime minister Shinzo Abe is pressing ahead. He could even see an inflation revival in 2017 in the world’s third-biggest economy.

Four years into “Abenomics,” a three pronged-approach comprising fiscal and monetary expansion along with pro-growth structural reforms, and the center-right leader has yet to fully reverse an entrenched deflationary mindset in a nation of 127 million people. Since Japan’s economic bubble burst in the early 1990s, policymakers have struggled to revive an economy weakened by deflation, debt and aging demographics.

Under Abe’s second stint as leader, Japan’s real GDP growth rate has shown a mixed performance. It posted a 1.4 percent gain in 2013, slipped to just 0.3 percent in 2014 (due to a consumption tax hike) and grew by 1.2 percent in 2015. The World Bank expects the Japanese economy to have expanded by just 1 percent in 2016—with sub–1 percent growth rates predicted through to 2018.

The bank revised its growth projections for 2017 and 2018 to 0.9 percent and 0.8 percent. Still, it said the Japanese economy remained “constrained by the low growth potential implied by a shrinking and aging labor force and heightened policy uncertainty in major trading partners.” That low growth potential has contributed to “diminished expectations, which negatively affect investment spending as well as fiscal and monetary policy effectiveness.”

Progress toward the Bank of Japan’s 2 percent annual inflation target has also been slow, despite massive monetary stimulus under the central bank’s quantitative easing policy and its move last year to adopt negative rates. In November, the consumer price index dipped 0.4 percent for its ninth straight monthly fall. Now, the BOJ does not expect to achieve its price target until fiscal 2018 at the earliest.

Meanwhile, gross public debt has blown out to nearly 250 percent of GDP (net public debt is a more manageable 126 percent) and household debt exceeds 130 percent of GDP. At the same time, the population is set for a tenth straight year of decline. More than a quarter of the nation’s population is sixty-five years old or older. That crimps potential output, increases health and welfare spending, and shrinks the pool of household savers that Tokyo relies upon to sell its bonds.

In its latest annual review, the International Monetary Fund said that while Abenomics made initial headway, its “structural impediments and policy shortfalls” made it difficult to achieve a sustained lift off. The IMF pointed to labor market inflexibility, limited financial sector support for risk taking, uncertainty over fiscal and monetary policy, and external headwinds—which include a sluggish global growth.

Opinion polls show that a majority of Japanese lack faith in the ability of Abenomics to revive Japan, even though Abe remains popular after winning a succession of election victories.

Despite Abenomics’ many challenges, Abe at least has time on his side. His latest victory in last July’s upper house poll gave his Liberal Democratic Party (LDP) and its allies a “supermajority.” If the party endorses rule changes, then he could stay in office beyond the 2020 Tokyo Olympics and become Japan’s longest-ruling leader.

Jesper Koll, a Tokyo-based economist and CEO of WisdomTree Japan, sees this political stability as crucial for Abenomics’ prospects. “Nothing succeeds like success in politics, and with the LDP set to change its internal rules Abe, in all likelihood, will be around until 2021,” Koll said. “Policy uncertainty used to be a big problem in Japan, but now you have policy certainty, which is crucial for investment.”

Koll pointed to Abe’s actions in pushing through Trans-Pacific Partnership ratification laws in parliament and in challenging vested interests. Its pro-competition reforms in electricity, telecommunications and pharmaceuticals effectively give Japanese consumers a tax cut through lower prices.

Notably, the longtime Japan analyst sees the BOJ achieving its inflation target “by the end of 2017,” helped by the first increase in wages for twenty years and aggressive fiscal stimulus amounting to some 5 percent of GDP.

“If I’m right and this year we see an acceleration in overall economic growth and an acceleration toward the 2 percent inflation target, [then] by late summer or early fall there will be discussion about the BOJ increasing its interest rate target . . . to around 0.5 percent by year-end,” he said.

Helped by a weaker yen, which he sees falling to around the 130 to 135 level against the dollar, Koll expects Japanese corporate earnings to rise by some 25 percent this year. That increase would boost the benchmark Topix index of Tokyo stocks to a decade high of around 1,800.

Other analysts have also revised upwards their expectations. In November, Morgan Stanley changed its Japan stock market rating from “underweight” to “overweight,” thanks to renewed buying by foreign investors coupled with stock and exchange-traded fund purchases by the BOJ and Japan’s Government Pension Investment Fund.

Morgan Stanley sees the Topix index rising by 16 percent to 1,800. Meanwhile, Citi sees it reaching 1,650 and has rated Japan its top pick for 2017. Additionally, Nikko Asset Management (Nikko AM) has forecast a 10 percent gain, citing rising earnings along with the benefit of corporate governance reforms.

“Trumponomics” could add another tailwind, according to GaveKal Research analyst Neil Newman. “About 14 percent of Japanese company profits come directly from North America-based production and so should benefit from Donald Trump’s promise to dramatically cut US corporation tax rates,” Newman told the Australian Financial Review.

“Japan, which sells about 45 percent of its offshore production in the U.S., is well placed to deal with a more ‘de-globalized’ world,” he said.

Although the short-term outlook appears positive, longer-term reforms to boost productivity are critical to Abenomics achieving its stated goal of a 600 trillion yen ($5.2 trillion) GDP by fiscal 2020. A primary budget surplus is incorporated in that goal. Long-term measures include improved childcare and family-friendly corporate policies to drive stronger female and elderly employment, further deregulation and taxation reforms and the embracement of diversity, and potentially including wide-scale immigration.

A tourism boom has helped revitalize regional areas. Tokyo is now eyeing sixty million tourists by 2030 along with new multibillion-dollar casino investments following a recent legalization. Business is also benefiting from a lower corporate tax rate, which has been cut below 30 percent. Meanwhile, inward and outbound foreign investment have hit new highs.

Analyst Masazumi Wakatabe also points to some of the social benefits of Abenomics, which as well as cutting unemployment has helped lower the suicide rate, from 27,283 in 2013 to less than twenty-two thousand in 2016. The poverty rate for households has also dropped, along with the child poverty rate for the first time since data was collected.

“If Japan’s CPI really hits 2 percent and inflation kicks in, as [BOJ governor Haruhiko] Kuroda has been saying, people will naturally withdraw money from their bank deposits and move to investment,” he told the Financial Times.

Regardless of whether it occurs this year, Abe can at least reflect on the fact that he likely has another four years to deliver on his policy goals. In 2020, the veteran prime minister will likely preside over the Tokyo Olympics, and he will be keen to ensure the international spotlight highlights Japan’s successes rather than any policy failures. For Abenomics, the race is only halfway run.