Abiy Ahmed and the Consolidation of Ethiopia’s Dictatorship 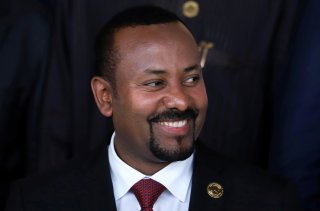 Africa has, for decades, been a democracy success story albeit one too often ignored in the West. When Ronald Reagan took office, U.S. exports to Africa accounted for only four percent of total U.S. exports and the share of American investment in Africa was even less. Strip away Morocco from the mix, and the proportion of U.S. trade with the continent’s then-fifty-two countries was even less. Freedom was a rare commodity. Freedom House’s Freedom in the World survey for 1983–84 ranked only Botswana, Mauritius, and Nigeria free among African countries. South Africa’s Apartheid regime and Ethiopia’s Derg were both stains on the continent.

Far more countries moved from not free to partly free. Ethiopia, the continent’s second-largest country by population, was one of them. In 1991, longtime Marxist dictator Mengistu Haile Mariam fled the country for Zimbabwe exile. Meles Zenawi took over as a transitional leader and embraced ethno-federalism in order to end the decades of ethnic conflict which Ethiopia had suffered. In May 1995, Ethiopia had its first multi-party elections. Some opposition parties boycotted the polls which many observers nonetheless deemed fair despite ruling authorities taking advantage of state resources. Government harassment of opponents continued, however, and the outbreak of war with Eritrea in 1998 further impeded political liberalization. While the 1995 constitution was progressive, the reality of its implementation often was not. In 2010, against a broad global backdrop of democratic backsliding, Freedom House returned Ethiopia to the ranks of the not free and observed, “Ethiopia's trajectory has also been negative for a number of years, as Prime Minister Meles Zenawi has persecuted the political opposition, tilted the political playing field, and suppressed civil society.” In 2012, Freedom House returned Ethiopia to the ranks of the unfree. In 2018, it listed Ethiopia in the company of Venezuela, Turkey, and Yemen as having among the most precipitous declines in freedom over the previous decade.

It was perhaps for this reason that the 2018 rise of Abiy Ahmed to Ethiopia’s premiership captivated international diplomats. He succeeded Hailemariam Desalegn who was the first leader in Ethiopia’s history to step down voluntarily. At just forty-one-years-old, Ahmed represented generational change. He came from a security service background, but had a reputation as a reformer. Such optimism about Ahmed’s intentions grew when he sought to end the decades-long stand-off with Eritrea, an initiative which won him the 2019 Nobel Peace Prize in recognition of “his efforts to achieve peace and international cooperation, and in particular for his decisive initiative to resolve the border conflict with neighboring Eritrea.”

There are no shortage of Nobel Peace Prize embarrassments but Ahmed is quickly positioning himself to be among the Norwegian Nobel Committee’s biggest regrets. In hindsight, what the Nobel Committee saw as a bold gamble for peace appears more a premeditated agreement to bury one hatchet to wield another. The Ethiopia-Eritrea border war was likened to a fight between two bald men fighting over a comb. With the border settled, Ahmed could then begin his own assault in conjunction with Eritrean forces on Ethiopia’s northern Tigray region as Ahmed seeks to recentralize Ethiopia and reverse the autonomy enjoyed by Ethiopia’s ethnically diverse regions and enshrined in the 1995 constitution.

The casus belli appears to be a dispute between the Tigray region and Ahmed’s government about his unilateral efforts to expand his mandate. In June 2020, Ahmed announced that he was postponing elections. Supporters said prudence against the backdrop of the coronavirus merited the extension of his term while opponents warned that abrogating the constitution opened the door to reconsolidate dictatorship. In Tigray, the regional government did not recognize the extension of Ahmed’s term and moved forward with its own elections which Ahmed deemed “illegal.” Tigrayan authorities responded by arguing that Ahmed’s condemnation was meaningless as his constitutional mandate expired in October 2020. Perhaps fearing that Tigray’s political defiance could spread to Ethiopia’s other region, in November 2020, Ahmed ordered Ethiopian Defense Forces to occupy Tigray and oust its elected government. The Tigrayan People’s Liberation Front, one of the key forces which overthrew the Derg, dug-in to defend their Tigray’s local autonomy and to stymie rumors plans to transfer territory from their region to neighboring Amhara.

It has been a brutal fight. Ethiopian forces cut off communications to the regional capital Mekelle as Ethiopian forces marched on the city and reportedly subjected it to an artillery barrage. Despite Ethiopia’s repeated denials, Ahmed appointed his own mayor who now admits that Eritrean forces also joined the fighting, a fact the U.S. intelligence community now acknowledges. Eyewitness accounts describe Ethiopian and Eritrean forces summarily executing civilians and looting property. For Ahmed, power motivates, and for Eritrean dictator Isaias Afwerki, cash does. Few having tasted liberty are willing to forfeit it easily, however, and so unrest continues. On Dec. 27, Ethiopia reportedly lost a general.

Like many self-described reformers before him, Ahmed has grown addicted to power. He is not alone. In Somalia, President Mohamed Abdullahi Farmaajo has likewise moved to undermine federalism and restore dictatorial control akin to what Somalia experienced during his uncle Siad Barre’s regime. What makes Ahmed so dangerous is that well-meaning Norwegians bestowed him with the mantle of peacemaker. As Ethiopia heads toward the delayed elections tentatively now rescheduled for June 5, 2021, Ahmed’s fight not only undercuts his chief rival, who happens to be Tigrayan but enables him to use emergency powers to further erode democracy.

It is time for Western countries and African democracies to speak directly about the dangerous path down which Ahmed has sent Ethiopia. Ethiopia is a diverse country, so a centralized dictatorship simply will not work. As Ahmed seeks to substitute nationalist polemics for competence, he appears ready to pick fights not only with Egypt and Sudan, but with Kenya as well. Ahmed’s growing dependence on China increasingly appears less about development and more about finding a backer who will bankroll Ethiopia’s further slide into autocracy. Simply put, increasingly it appears that Ahmed is not the youthful, reformist alternative to Eritrea’s Isaias, but rather his pupil. Isaias brought tragedy to Eritrea. The international community should not be blind as a power-hungry Ahmed risks the same with Ethiopia.