Abusing the Filibuster Ensures Its Abolition 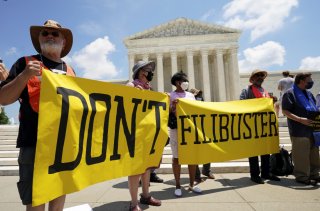 Arguments over the filibuster veer toward an unproductive choice: kill it or keep it. The rational choice lies between extended debate and endless debate. Those who care most about retaining the filibuster need to recognize the distinction and act on it responsibly. Passage of the 1968 Fair Housing Law illustrates that extended debate can be fruitful. It can produce better policy and broader consensus.

Refusal by the Senate to invoke cloture—ending debate under the chamber’s rule XXII—usually prompts the leadership to move on to other business. The 1968 experience offers a rare example of extending debate over many days even after cloture has been denied. Majority leader Mike Mansfield (D-MT) allowed debate to continue through a record of four cloture votes.

What was happening during the many days that the bill remained before the senate? A lot. Negotiations were going on among key groups of Democrats and Republicans, centering around Minority Leader Everett Dirksen (R-IL). He had, sometimes reluctantly, played an essential role on voting rights and public accommodations. By 1968, aging and unwell, he once again faced sharp divisions in his party caucus. The point man making the case for Dirksen to support ending the filibuster and reaching the merits of the legislation was Edward Brooke (R-MA), backed by senior colleagues including Jacob Javits (R-NY), Hugh Scott (R-PA) and Clifford Case (R-NJ).

The Johnson administration initially lent only tepid support to the bill, gauging its prospects to be slim. With the Judiciary Committee locked down against such legislation by its segregationist chairman, James Eastland (D-MS), the legislation had taken an unusual route. Cosponsors Walter Mondale (D-MN) and Brooke had brought the measure out of the Committee on Banking and Housing.

As Mansfield kept the bill on the floor, the intimate politics of the Senate had time to take effect. Significant to the evolution of Dirksen’s position was the quiet counsel of his son-in-law, Howard Baker (R-TN), a freshman who had arrived in the same class as Mondale and Brooke. The core of the bill remained intact, but Baker helped refine its scope by favoring the so-called “Mrs. Murphy’s provision,” exempting people who rented space in their own homes. Even with Dirksen himself offering the third cloture petition, support fell short. Nevertheless, Mansfield persisted, encouraged by Vice President Hubert Humphrey, who had previously been a brilliant deputy to Mansfield. A crucial factor in extending the debate was the fact that each vote showed progress toward the two-thirds majority then required for cloture. That reinforced the appeal by floor manager Philip Hart (D-MI) for more time.

Prolonging consideration of the bill gave time for grassroots support to grow and find expression, gaining weight with senators of divided minds, whether on the filibuster or on the merits of the bill. The climax came after the third cloture vote when Senator Jack Miller (R-IA) struck a bargain with Senator Brooke. Miller would vote for cloture if Brooke agreed to vote for an amendment focused on fair housing for veterans. Brooke agreed to do so, but only with Miller understanding that the Massachusetts senator would raise questions about the Iowans’ proposal. Both men kept their word, but Brooke’s colloquy with Miller was lethal to the amendment. Miller’s cloture vote, however, was decisive in ending debate and allowing a strong majority to endorse the historic legislation. On March 11, the bill passed the Senate by a vote of seventy-one to twenty, followed by approval in the House a few days after the assassination of Martin Luther King, Jr. on April 4.

If the 1968 episode demonstrates that extended debate can be useful in forging a healthy coalition, it also cautions against endless debate. Failure to invoke cloture would have frustrated the overwhelming majority that sought to assure fair housing for all Americans. Such frustration, then and now, points toward ending the rule that enables endless debate. In the long run, a minority that exploits procedural devices to thwart a majority—rather than permit a judgement on the merits of legislation—exhausts its moral authority and endangers its own future power.

Perverting extended debate into endless debate corrodes the basic principle of self-government, the right of people to form majorities for or against particular policies. Those who value the filibuster must recognize that abusing it is a recipe for its abolition.

Alton Frye, the Presidential Senior Fellow Emeritus of the Council on Foreign Relations, was staff director for Senator Edward Brooke during the 1968 filibuster.