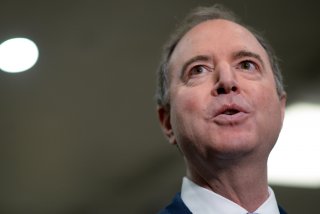 Perhaps no politician in America rode the Trump train—in his own way—as effectively Rep. Adam Schiff (D-Calif.), now jockeying to be the attorney general of California.

Schiff, a Democrat, already has such stardom from the first impeachment of former President Donald Trump. But it was Schiff’s anti-Trump investigations were marked by demonstrably false assertions and an apparent affinity for a surveillance state and secrecy that should raise alarms as to how well he can be trusted in a state’s chief law enforcement role.

“Until Trump got elected, I had respected Adam Schiff as the ranking member and thought he was there to make sure our intelligence community was doing things right and that we were on top of things as far as the threats to America. Then I saw it go to predominantly being out to go after this president of the United States,” House Intelligence Committee member Rep. Brad Wenstrup (R-Ohio) said in an interview for the Abuse of Power: Inside the Three-Year Campaign to Impeach Donald Trump.

Certainly, Trump’s conversation with Ukraine President Volodymyr Zelensky that prompted an impeachment was not a “perfect call” as the 45th president claimed. But Schiff did himself no favors in the committee’s first public impeachment hearing in 2019 when he painted the call in an exaggerated false light. When he was called on it, he defended it as a “parody.”

The true parody was Schiff’s very Imperfect Call in 2017 when he unwittingly colluded with Russians to beclown himself.

The Russian comedy team, Vladimir Kuznetsov and Alexey Stolyarov, pranked him, claiming to be a Ukraine politician Andriy Parubiy informing him, “There were pictures of naked Trump.” An eager Schiff responded, “And so Putin was made aware of the availability of the compromising material?” The fake Parubiy responded it was the means for blackmail. The Daily Mail reported that Schiff’s staff continuously followed up to try to collect the “classified materials for the FBI” from a likely bewildered Ukraine’s embassy in Washington, DC.

While anyone might be prone to a prank—this shows how desperate Schiff might have been to provide a factual basis to his claims.

“We’ve been very clear during the process we didn’t have the information he talked about,” Nunes said in an interview for the book. “The Intelligence Committee is traditionally nonpartisan and has generally not performed in the public domain, except for instances such as the Iraq War. But, typically, it has been about national security issues or issues we can’t talk about publicly.”

On Aug. 26 Acting Director of National Intelligence Joseph Maguire notified the Intelligence Community Inspector General Michael Atkinson in a letter about a whistleblower’s complaint regarding the Trump-Zelensky call. The information wasn’t available to Congress and not in the news.

Nevertheless, two days later Schiff tweeted: “Trump is withholding vital military aid to Ukraine, while his personal lawyer seeks help from the Ukraine government to investigate his political opponent. It doesn’t take a stable genius to see the magnitude of this conflict. Or how destructive it is to our national security.”

So how did Schiff seem to know about what was around the corner?

In early October, the New York Times reported that despite Schiff’s claim that neither he nor his staff had talked to the whistleblower, this person had, in fact, consulted with Schiff’s staff before filing the complaint. “The whistle-blower’s decision to offer what amounted to an early warning to the intelligence committee’s Democrats is also sure to thrust Mr. Schiff even more forcefully into the center of the controversy,” the New York Times story said.

In the impeachment pursuit, Schiff’s staff obtained phone records from AT&T and Verizon of Trump’s allies and at least one journalist without a regular subpoena process or notifying the targets, prompting concern from the Federal Communications Commission. The Wall Street Journal’s Kimberly Strassel referred to this as Schiff’s “surveillance state.”

In March 2020, FCC Commissioner Brendan Carr wrote in a letter to Schiff that Congress has the right to seek information, but not without judicial review.

“The Committee created out of whole cloth a secret and effectively unreviewable and unchecked mechanism for obtaining call records on any and all Americans,” Carr wrote, adding, “If the committee can obtain and then expose the call records of a journalist pursuant to a secret process, I’m concerned about the chilling effect this could have on a free press.”

Schiff’s record isn’t without merit. He was a former federal prosecutor who after his election to Congress led the bipartisan impeachment proceedings of two federal judges well before the partisan Trump impeachment. Now he’s lobbying Gov. Gavin Newsom for the attorney general job and has the backing of House Speaker Nancy Pelosi.

Newsom certainly has his own political survival to worry about now in California, but with regard to his legacy, he could be well served to consider Schiff’s record in totality before placing the House intelligence chairman as California’s top cop.

Fred Lucas is the author of “Abuse of Power: The Three Year Campaign to Impeach Donald Trump,” (Bombardier Books, 2020) and White House correspondent for The Daily Signal.