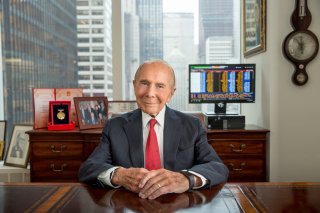 COTEMPORARY U.S. foreign policy challenges echo those that emerged in the immediate aftermath of the Cold War. From 1989 to 1994, with the dawn of a “New World Order,” the United States began a protracted process of bringing China and Russia into a more productive engagement with the West. It was predicated on the belief that economic policy shapes political systems and that free trade is one way to demonstrate the poverty of central planning. The legacy of that era continues today, with China better off thanks to free trade and Russia worse off due to its entrenched resistance to capitalism.

Clear-eyed statements of the challenge from that era remain valuable, and merit attention. A bracing starting point is the January 1989 Foreign Affairs article “American Foreign Policy: The Bush Agenda” by former President Richard M. Nixon, primarily addressing post-Soviet Russia. One of the most astute statesmen on the modern world stage, Nixon devoted most of his post-presidential years to international affairs, writing prolifically and engaging with leaders worldwide, urgently during this period.

Nixon’s chief interlocutors included a contemporary international business executive, Maurice R. (“Hank”) Greenberg, as immersed in international commerce as Nixon was in geopolitical strategy. Working with trailblazing investments in China begun in 1919 by his mentor, C.V. Starr, Greenberg became prominent for founding, in 1968, what he would lead to become the world’s largest commercial insurance company: American International Group (AIG).

For many years, the two maintained a vibrant correspondence on international affairs. That correspondence, along with related exchanges Greenberg conducted with other presidents and officials, illuminates contemporary challenges and potential solutions. It remains valuable for anyone interested in the sources and conduct of American foreign policy.

Greenberg and Nixon shared much in common, though from different perspectives: Nixon, the president and public servant; Greenberg, the global business executive who made U.S. foreign policy his and AIG’s business. They were both internationalists, realists, and pragmatists. Nixon was a contemplative thinker, Greenberg a quick study. Patriots to the core, both leaders influenced governments and businesses around the world.

Greenberg’s position at AIG gave him uniquely valuable insights into global affairs and incentives to promote free trade as well as the rule of law. The company had major operations across the world, and Greenberg engaged directly with heads of state and senior officials. This was essential to protect the interests of both AIG and its client base of large international corporations, including the United States’ most visible multinationals.

During his tenure, Greenberg maintained close working relationships with all U.S. presidents, memorialized in substantial correspondence. President Jimmy Carter expressed his gratitude for Greenberg’s support of his effort to grant most-favored-nation (MFN) trading status to China—while both recognized that their views on many other matters of political and economic philosophy differed considerably. Greenberg shared more philosophically with President Ronald Reagan, who once in a letter to Greenberg aptly called Nixon “a great American hero.”

Few business executives had the exposure and experience Greenberg enjoyed, making him a worthy correspondent of the Oval Office. On the subjects of China and Russia, the correspondence is valuable reading on two levels—substance for the savvy strategic thinking, especially on free trade and economic policy; style for the urbane, patriotic, statesmen-like argumentation. On substantive matters, two subjects stand out in Greenberg’s presidential correspondence: adamant support for MFN status with China, including through the aftermath of 1989’s Tiananmen Square crackdown, as well as support for private economic intervention in Russia after the collapse of the Soviet Union.

THE FRIENDSHIP between Nixon and Greenberg dated to their successful joint efforts, along with Henry Kissinger, in the revival of China-U.S. diplomatic relations in 1974 and economic exchange thereafter. For the next fifteen years, the two nations enjoyed increasing interaction in many spheres, economic, cultural, and diplomatic. The American trio believed such exchanges to be in the national interest. They held to those beliefs despite domestic convulsions in China.

Greenberg, Kissinger, and Nixon led informal back channel diplomacy to work through the crisis. Their correspondence captured their thinking, which would ultimately inform U.S. policy. On November 17, 1989 Greenberg wrote to Kissinger, sharing highlights of his recent visit with China’s top leaders.

I don’t have to repeat for you the discussions with regard to Tiananmen Square and the attitudes in the U.S. to those events. I was blunt in my discussions in Shanghai as you were in Beijing and I was in the talks that I had. The other side of that issue is the belief on the part of Chinese leadership that they were confronted with an incipient revolution.

Moreover, as we were told repeatedly, the Chinese will not bow to pressure, never have, that simply increases their resistance and furthermore the differences in culture between our country and theirs is repeatedly pointed out as well as the original understanding when relations were reinstituted that we would not interfere in their internal affairs.

One of the purposes of the America China Society has been to maintain a continuity of bipartisan foreign policy towards China, and I would hope that the Society expresses its grave concern to the Administration with respect to pending legislation dealing with sanctions.

[S]anctions have not proven to be a successful foreign policy tool. In this instance, the application of sanctions would set back China-U.S. relations for some time. We can have more influence by maintaining relations than by freezing them. I would also suggest that it is not in our national interest, regardless of how we feel about what occurred within China.

I also believe that it is not in our national interest with respect to foreign policy in Asia and indeed the world (given the changes taking place in the Soviet Union and Eastern Europe) for us to reduce our relationships with China from where they were before Tiananmen Square.

Congress was moving on legislation that would impose punishing sanctions on China. In a letter to Nixon on November 27, 1989, Greenberg explained his opposition to these pending bills. The context was a report on two trips Greenberg had taken to China in the prior two months. On the first, he met with Zhu Rongji, then mayor of Shanghai, for a session of the International Business Advisory Council. Greenberg reported:

The session in Shanghai covered how Shanghai’s economic development could be aided and/or assisted by foreign business. I was very candid with Mayor Zhu, as you were the Chinese leadership, in expressing the outrage which was felt universally over the tragic events in June. I also explained that foreign capital is directed where it feels secure, where an adequate return on equity is assured, and where laws and regulations are in place and not subject to change at whim. In addition, I cautioned against Central planning in that it discourages foreign investment with the concomitant increase in bureaucracy and inefficiency.

Greenberg turned to his second trip of that quarter, to Beijing, where he met with the country’s top officials, including President Yang Shangkun and Premier Li Pen. He shared with Nixon the following impressions, starting with the personal: he described Secretary General Jiang Zemin as “forthright, knowledgeable, international in his outlook and, I believe, a person with whom we can do business.” On policy, the topic of sanctions, Greenberg wrote:

I share your view that sanctions at this moment are wrong—it is not in our national interest. Japan is gaining strength economically all the time and is exerting greater influence throughout Asia, making U.S.-China relations all the more important. The changes taking place in the Soviet Union and the uncertainness connected therewith, as well as Eastern Europe, reinforce the need to maintain a growing strategic relationship with China. Events in Europe, however, should not detract us from our interest in Asia…

The bill on sanctions being passed by Congress will obviously be harmful to U.S.-China relations. I personally hope that there might be sufficient amendments to this bill that would permit the President to veto it. President Bush has a keen understanding of China and has tried to contain the damage. I believe that vetoing it is in our National interest, and hence, would not result in domestic political repercussions for the President that would have any lasting damage.