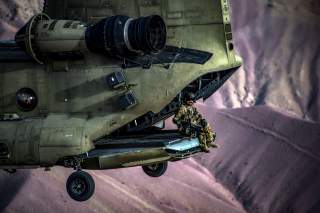 Earlier this month, the international community met in Tashkent, recommitting to stand with the Afghan government to reach an end to the conflict. The Tashkent conference was the latest step in keeping the peace process moving forward, following the National Unity Government's comprehensive offer of peace to the Taliban at the Kabul Process conference in February.

For the first time in seventeen years, the Afghan government is militarily and strategically positioned to pursue peace, due to several factors.

First, Washington's South Asia strategy is the right approach. The strategy is not time bound, but instead based on conditions on the ground. The change in the rules of engagement for U.S. forces has allowed them to fully support the Afghan National Defense and Security Forces (ANDSF)—who have taken the lead on combat operations since 2014—in going after the Taliban. Backed by American air power, we have been able to deny the Taliban the ability to congregate and plan. By dismantling not only their weapons caches, but destroying one of their main sources of funding (drug labs) we have crippled their ability to recruit. But most important of all, never before in this war have the Taliban been targeted militarily while at the same time facing the serious threat of their sanctuaries being exposed and denied. Explicit international pressure to deny sanctuaries is the key that was missing from every U.S. policy since 2001.

Second, since late 2014, the Afghan government gave top priority to rooting out the corruption, abuse of power, dysfunction and poor leadership that was literally crippling and demoralizing our security forces, increasing casualties, and inhibiting our ability take the fight to the enemy. The reforms have included sweeping changes in leadership, from ministers, deputy ministers, generals and corps commanders; the prosecution of corrupt, high-level military and police personnel via the Anti-Corruption Justice Center; and implementing proper inventory and procurement processes to make sure that troops on the front lines are well-equipped and well-trained. As a result, improvements have been seen on the battlefield—UNAMA’s (United Nations Assistance Mission in Afghanistan) 2017 annual report documented 'significant improvements' in the way that ANDSF are fighting on the battlefield.

Structural changes in the security forces have also addressed the country’s changing security needs—for example, by doubling the number of Afghan Special Forces Commando units and creating and equipping an air force. With training, equipment and aircraft from the United States, the Afghan Air Force has been key in turning the military campaign into a battlefield offensive for the first time in a decade. The government also worked closely with civil society representatives, local elders and the ulema (religious authorities) in order to connect the ANDSF with the general public. Today, Afghanistan has a professional, diverse, brave, and well-trained 354,000-strong security force that can count on popular support—the 2017 Asia Foundation survey showed Afghans have rising confidence in the ANDSF.

The third factor was the critical support, training, equipment and various technological capabilities provided by the United States and international partners via the Resolute Support mission. Without this, we would not have been able to consistently improve the quality and capabilities of our fighting force. Our goal is for our security institutions and forces to become self-sustaining, but we need ongoing support and training to achieve that goal.

The fourth factor is the change in the rules of engagement that has allowed U.S. forces to target terrorists with critical close-air power in support of ANDSF operations on the ground. It has also allowed them to target terrorist sources of funding. Since November, the ANDSF, with support from the U.S. forces, have destroyed sixty narcotics production facilities, denying the Taliban nearly $35 million in direct revenue. Overall, the strikes have denied over $174.8 million in revenue to drug traffickers operating in the region. The reduction in funding is significant. As the money dries up, the Taliban’s inability to provide their troops with weaponry, good salaries and training in sanctuaries further weakens their ability to mount attacks.

The fifth has been the U.S. government’s decision to directly address the critical issue of state-sponsorship of terrorist sanctuaries. Though this support has been a known fact for over a decade, it has never been explicitly addressed by U.S. policy, although eliminating sanctuaries and sponsorship of terrorists remains absolutely critical to the success of any strategy to bring security to the region. Now that the American government and its allies are demanding credible action to stop terrorism, the pressure to cut support to the sanctuaries has started to have effect.

The sixth factor, and arguably the most important, is the swift decline of any lingering Taliban legitimacy or sympathy amongst Afghans. With the Taliban on the defensive in the provinces, unable to hold new territory, and demoralized by the U.S. policy changes earlier this year, they began targeting civilians in our urban centers, mainly Kabul, our capital. Protecting civilians in our urban centers is our priority this year. As the Taliban and their sponsors feel increasingly cornered by mounting diplomatic and military pressure from the international community, the chances are high that they will attempt more attacks on civilians. But this strategy, too, will fail. The Taliban have evolved as a combatant group; whereas they once garnered some legitimacy as a religious ideological group fighting a supposed foreign occupier, the Afghan people overwhelmingly see them as the foreign-funded, narco-criminal network they have become. They have been irreversibly discredited and delegitimized in the eyes of the Afghan people. The 2017 Asia Foundation’s Survey of the Afghan people showed only 6 percent of Afghans believe the Taliban are ideologically motivated. The Afghan people have reached a national consensus on the need for peace, and they are raising their voices against the Taliban in protests and sit-ins demanding peace across the country. This trend will continue.

A prime example of these six factors at play is in the province of Helmand, notorious for both drug production and Taliban terrorism. International security forces in Helmand essentially fought the same battle each year for over ten years, but were still unable to secure it.

Over the past two years, the National Unity Government took measures to reclaim Helmand from Taliban control—we appointed a new governor, a new intelligence chief,and new corps commanders. We put corrupt Afghan army and police commanders from Helmand on trial and for the first time several received significant prison sentences. The Afghan Special Forces led successful operations to clear and hold Lashkargah, Nad Ali, Nawa, and Marjah districts, which were long held by the Taliban. With the use of critical air support from the U.S. military, we took out key Taliban commanders in the province, including the notorious Mullah Shah Wali (aka Haji Nasir) commander of the Taliban’s "Red Unit,” who was responsible for coordinating multiple attacks against civilians. And we were also able to target and eliminate their primary sources of funding. Over the course of just two months at the end of 2017, thirty-two Taliban heroin production facilities were eliminated across Helmand province, denying tens of millions of dollars in revenue to the group.

The Afghans who have been living under Taliban terror in Helmand are also speaking out. After the Taliban targeted a sports match in Helmand earlier this month, Helmandis reacted with public protests and a hunger strike against the Taliban and in support of the peace process, setting up a protest tent at the site of the bombing.

This year, for the first time since the beginning of the war, the number of attacks in Helmand province decreased by nearly 20 percent. The Afghan government’s undertaking to stabilize Helmand is a model that we are replicating in contested areas across the country—and we are seeing results. Currently, nine of Afghanistan’s about 400 districts are under Taliban control. Across the provinces, there has been a marked reduction in fighting initiated by Taliban and Daesh since the U.S. strategy for South Asia was announced. About 30 percent of districts are still experiencing various levels of fighting, but this is down from 45 percent just a matter of months ago, prior to the start of the new offensive. The important change is that the ANDSF has been able to clear and hold areas of the country that are of strategic importance to the Taliban, which we were not able to do previously.

As sponsors of terror accept that they will not be let off the hook, we can expect to see the peace process taken seriously. At the Tashkent conference, President Ashraf Ghani took the next step in that process, which was not only to secure a regional consensus on cooperation for combating terrorism, but also to work together on key regional economic projects that will link the six Central Asian countries into an interdependent economic block. This regional consensus on development and growth, rather than perpetuating local conflicts, will put immense pressure on those neighbors who continue to choose to be part of the problem instead of part of the solution.

After seventeen years of violence, sacrifice, and loss, we have all grown weary of war. And people are rightly skeptical of any claims of success or impending victory in this complicated conflict. We claim neither. We remain cognizant of the challenges and tasks that lay ahead, but we can confidently say that we are making progress, not only operationally on the battlefield, but also strategically in the region. With our U.S. and international partners, we have seen the progress we had long hoped for. But for Afghan and American efforts to succeed, it is critical that the Afghan government continues to advance critical military reforms, fight corruption and pursue peace.