The Afghan Exodus Is a Story of Civil Disobedience 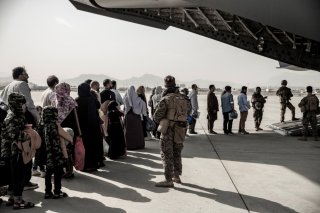 On August 16, 2021, a C-17 military cargo plane took flight from the Kabul airport tarmac. Mobile phone video captured two tiny dots descending from the plane. The dots, it turns out, were two young Afghan men, one a soccer player named Zaki Anwari. Hidden in the undercarriage, they had to choose between being crushed as the wheels retracted and jumping to their certain deaths.

I watched the viral footage from my hotel room in Delhi, where I had arrived just a few days before the fall of Kabul. For many people around the world, this would be the scene that captured the end of America’s longest war­—an image of sheer desperation on the part of my countrymen. But for many of us, those bodies falling from sky and the thousands more trying to leave held a different meaning. They represented a form of collective responsibility: a willingness to face uncertainty, displacement, and even death to demonstrate our unmitigated rejection of the Taliban regime as a government and Talibanism as way of life. Those men, tumbling from the sky, had performed, in other words, the ultimate act of civil disobedience.

The great nineteenth-century American philosopher, Henry David Thoreau, is widely credited with coining the term civil disobedience. Thoreau refused to pay his taxes as a protest against the institution of slavery, the ongoing extermination of Native Americans, and the Mexican-American War. 150 years later, the mass exodus of Afghans—already tens of thousands, with hundreds of thousands more desperate to leave—marked the protest of a nation against an ideological project that refuses to recognize the full humanity of women and categorically rejects the fundamental principles of human rights and freedom of speech.

Four months into the Taliban’s new rule, so many of those left behind are overwhelmed by an unspeakable sense of grief, loss, and fear. This is especially pronounced for those of my generation who came of age with newfound freedom and dignity even in the face of sustained terror. Robbed overnight of those gifts, many of us watched our imagined possibilities, for which we had worked tirelessly to secure, vanish.

In the days after the Taliban’s fall in 2001, my hometown of Kabul looked as it always had: the shops, the dusty roads, the half-ruined city. But something was different. The constant unease of war had lifted, and a new feeling was in the air, a sense of peace and hope. I remember the first time I heard the phrase “international community” as legions of foreigners descended on Afghanistan in numbers never before seen. The arrival of aid workers, diplomats, consultants, soldiers, and contractors sparked a new impulse in us: a need to navigate this new social world being built around us by people who did not know our history or speak our language but seemed to promise something valuable just the same. In those early days, we were not literate in the vocabulary of these interveners. We were not seen as equals by either the internationals or the returning Afghan diaspora who positioned themselves as a kind of bridge between “the natives” and the modern world. That new impulse—to make our own way—moved us to study, learn, and work toward the rebuilding of a new Afghanistan.

Thousands of us applied for scholarships, jumping at the chance to study abroad. A few years later, most of us returned, equipped with the language and skills to engage in the discussions and debates of the day with our people on our terms. We recognized our privilege as the first generation in decades with the opportunity to regenerate the Afghan intelligentsia, so brutally suppressed by the 1970s communist regime and later by the Islamist hardliners in the 1990s. Finding our place in the twenty-first-century global order was inspiring, even as we knew that those who stood for democracy and human rights were intimately engaged with deplorable dictatorships in the name of political interest. We understood that international support, despite its avowed aims, was not free of arrogance or even outright discrimination.

We also knew that modern education, feminist politics, and constitutionalism were not foreign to our society; they existed and evolved in our own culture, history, and way of life long before the international intervention. Even the Taliban regime, for all its brutality, failed to suppress them. The time had come for us to author our own future, to be partners in the larger political project in which we were, at least theoretically, jointly engaged. This was our home, our country, and we knew that the civic good was not a commodity to be imported but rather one we had to build.

As the years went on, for so many of us, a belief in human dignity was not a slogan but the reality of our lives. Although politicians often commoditized and misused our values, especially during President Ashraf Ghani’s administration, we made such meaningful progress that the Taliban launched a massive campaign of targeted assassinations in 2020, after its deal with the United States, to eliminate journalists, civil society activists, professors, clerics, bureaucrats, teachers, and even students. But we persevered, believing that our international partners would stand with us when the values they had championed came under existential threat.

As the Taliban approached the gates of Kabul, many faced a choice: stay and, if spared, work for the new regime, or leave everything behind for the harsh uncertainty of exile. Some, like Zaki Anwari, became a kind of martyr, choosing near-certain death over life under the Taliban. And a few, like my friend Fahim Dashti, chose to take a last stand on behalf of our generation’s ideals. I recall my last conversation with him two weeks before the fall of Kabul. As everything crumbled around us, he vowed to stay—to die, if necessary—but never to submit to Talibanism. On September 4, he was killed defending his home village.

For those of us lucky enough to choose exit, our “good” fortune can be hard to grasp when we reflect on the families, homes, careers, and countrymen we left behind. But, scattered and abandoned as we may feel, the knowledge, understanding, and hope we accrued in the last twenty years remain ours. And the decision not to enable, normalize, or legitimize the inhumane extremism of the Taliban drives us forward. Our work, as students and professors, journalists and artists, remains an extension of the greater ethical and political project we began two decades ago. The ideas and values that underpin it will enable us to do right by our homeland even as we find ways to contribute meaningfully to our new homes.

Omar Sharifi is country director of the American Institute of Afghanistan Studies and a Research Fellow and Lecturer at the Hubert H. Humphrey School of Public Affairs, University of Minnesota.