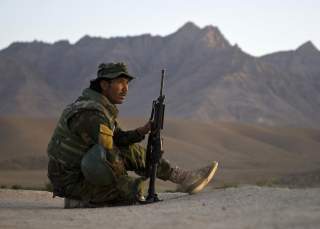 The Kabul government seems headed toward an agreement with the militant wing of Hezb-i-Islami (HIG), a group that for the last fifteen years has been at war with the Afghan state. A draft accord reached with HIG chief Gulbuddin Hekmatyar has been touted by the Afghan government as the first step in a political process that could eventually draw in core elements of the Taliban. The tentative peace pact, which comes after two months of negotiations, follows persistent attempts by the government and American, Pakistani and Chinese representatives to restart last year’s collapsed talks held with a Mullah Mansour–led Taliban leadership. Now Kabul and Washington are expressing hope that the recent dramatic change at the Taliban’s helm, coupled with a HIG agreement, will create the momentum needed to revive a broader peace dialogue. But an examination of the terms and the motives behind this pending deal with HIG suggests reason for concern not optimism.

Under the initialed agreement with the Afghan High Peace Council, HIG has agreed to cut ties to other insurgent antigovernment groups, adhere to the Afghan constitution and contribute toward efforts that would help stabilize the country. HIG leaders expect in return that all prisoners from the group will soon be released, and that HIG-connected family members who are presently refugees in Pakistan and Iran will be repatriated. Returning fighters will receive amnesty and many may eventually be incorporated into the Afghan security forces. Key leaders are also being promised housing and offices to facilitate their reentry to Kabul and the Afghan political system. They have received assurances that their organization will be soon removed from the international sanctions blacklist.

One major sticking point remains in the negotiations. The HIG demands as a condition for signing an agreement that it specify a scheduled withdrawal of all foreign forces. Understandably, the government of Ashraf Ghani finds it difficult to yield on this issue. Without foreign trainers, advisors and special operations units, Afghan officials have little confidence in the ability of their current security forces to withstand the Taliban’s mounting military challenge. Yet with so much already invested on both sides in having the talks succeed, some compromise is probable. HIG may be willing to settle for the government declaring that, at least in principle, foreign forces have no place in a sovereign Afghanistan.

Whatever the tradeoffs, confidence in an agreement rests heavily on trust. Here’s the rub: it is not an exaggeration that Gulbuddin Hekmatyar is among the most disliked and distrusted figures in recent Afghan history. He first acquired a reputation for ruthlessness when he killed a fellow student and political rival during his time at Kabul University. In 1976, after the Islamic movement that he helped found had split, Hekmatyar was implicated in an assassination attempt against fellow leader Ahmed Shah Massoud. During the Afghan jihad of the 1980s, HIG, which received (at Pakistan’s insistence) the lion’s share of arms going to the seven-party mujahideen alliance, was widely believed to be more interested in amassing arms to be used against political opponents than in fighting the Soviets. Hekmatyar’s bid for power in a civil war that followed the installation in 1992 of a Pakistan-parented mujahideen government resulted in thousands of Afghans being killed, as HIG forces rocketed and shelled Kabul. Following the fall of the capital to the Taliban in 1996, Hekmatyar quit the continuing battle against the Taliban for exile in Iran. Then, in the wake of the December 2001 post-Taliban Bonn conference, at which he had unofficial representation, Hekmatyar denounced the new Hamid Karzai government and, together with his most militant followers, took sanctuary along with the Taliban and Al Qaeda in Pakistan. In 2002, Hekmatyar was suspected of being behind an attempt to kill the newly installed President Hamid Karzai.

Now, in his willingness to take his group out of the fight, Hekmatyar is not offering up much. Over the years, HIG’s probably fewer than two thousand fighters have played a relatively minor role in the insurgency. Indeed, not since 2012 has HIG carried out a major attack inside Afghanistan. In Pakistan, HIG has become increasingly estranged from the Afghan Taliban and Haqqani Network. It is therefore highly doubtful that reconciliation with Kabul would set a precedent for others to follow. While the Taliban has repeatedly expressed contempt for the Afghan political system, Hekmatyar has long signaled that under the right conditions he was ready to reenter Afghan politics. On doing so, he would likely find a mostly still loyal political constituency approving of his essentially Muslim Brotherhood agenda. The political wing of Hezb-i-Islami currently constitutes the single largest bloc in the parliament, and holds senior-level positions within the executive branch. Several of Karzai’s closest advisors were Hezb members, and the party was invited to join the coalition behind Abdullah Abdullah in his bid for the presidency in 2014.

With his return, Hekmatyar poses from within a far greater danger to Afghanistan as a pro-Western, liberal state than he ever had from outside the political system. With his past deviousness so well known, why does the government seem so comfortable with having this agreement? Among other reasons, Ghani may see political advantage in Hekmatyar’s return by playing him off against a cabal of former mujahideen chiefs grown impatient with his presidency. But the simplest explanation is that of a Kabul government wanting something to show for its years of failed efforts to find a political way out of a worsening conflict. Similarly, the United States, in its praise of an agreement with a group on its official list of terrorist organizations, is pleased to salvage anything from its own empty-handed search for Taliban leaders willing to negotiate. Lost to those encouraged by an agreement with HIG is the high probability that, by opening the Afghan political landscape to the machinations of a legitimized old warlord and veteran terrorist, an already contentious Afghan political scene will become even more volatile.

Marvin G. Weinbaum is the director of the Middle East Institute’s Center for Pakistan Studies and a former intelligence analyst for Pakistan and Afghanistan in the U.S. Department of State.