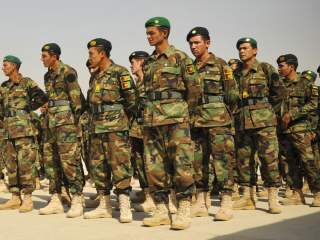 The dust hasn’t yet settled around the monumental changes that have taken place in Afghanistan over the last two years: the establishment of a National Unity Government, the ending of U.S. and NATO combat operations and the first-ever face-to-face (albeit short-lived) talks between the Taliban and Afghan government.

But the most potentially game-changing development in Afghanistan is the fracturing of the Taliban movement following news this summer that Taliban supreme commander Mullah Mohammed Omar died over two years ago.

Navigating the shifting terrain in Afghanistan won’t be easy. The United States will need to continue working closely with the Afghan government, even as it deals cautiously with Pakistan, which has supported the Taliban since its creation twenty-five years ago. But if Washington plays it smart, there is a chance that the Afghan regime, with support from U.S. and NATO partners, can shape the new environment in a way that brings long-term peace and stability to the war-ravaged country.

If, on the other hand, the United States pushes the Afghan government to make concessions to Pakistan while Taliban attacks continue unabated, Afghan President Ashraf Ghani’s hand will weaken and the country will further destabilize.

The Heart of Asia ministerial meeting, held in Islamabad earlier this month, was designed to promote peace and stability in Afghanistan. The display of diplomatic bonhomie between Pakistani and Afghan leaders raised hopes that Pakistan will facilitate a resumption of Afghan-Taliban peace talks. Dialogue between the insurgents and Afghan authorities—launched in Murree, Pakistan last July—broke down a few weeks later, following revelations that Taliban leader Mullah Omar had died two years prior.

But Pakistan’s diplomatic outreach and pledges to get the peace talks going again are incongruous with what is happening on the ground in Afghanistan. The Taliban have intensified their attacks in recent months, and according to a recently released report by the Washington-based Institute for the Study of War, the insurgents are making unprecedented territorial gains throughout the country and even threatening key provincial capitals.

It is difficult to discern Pakistani intentions, and Afghan skepticism of its often-duplicitous neighbor is running high. The sudden resignation of the Afghan intelligence chief Rehmatullah Nabil during the Heart of Asia conference is indicative of the distrust most Afghans hold toward Pakistan.

Following his resignation, in reference to a major attack on the Kandahar airport that killed fifty-one Afghan civilians, Nabil posted on social media that “At least 1,000 liters of the blood of our innocent people was shed, in the same red color as the carpet that we cat-walked on (in Islamabad)…Thank God I am not part of it.”

The Taliban advances have come in the midst of a leadership crisis within the movement. That crisis offers the U.S. an opportunity to weaken the insurgency and ultimately force its leaders into negotiations. Some argue that it is easier to negotiate with a unified Taliban, and thus the U.S. should root for Mullah Omar’s successor, Mullah Akhtar Mansour (who is close to Pakistani intelligence), to consolidate his hold on the group. But a fractured Taliban is a weaker Taliban. And while the power jostling may disrupt talks in the short-term, the split will almost certainly damage the credibility and effectiveness of the movement over the long run.

Like most Afghans, the dissident Taliban faction also is skeptical of Pakistan’s role in Afghanistan. Taliban leader Mullah Mohammad Rasool Noorzai rejected Akhtar Mansour as the successor to Mullah Omar, accusing Mansour of lying about the circumstances surrounding Omar’s death and of working too closely with Pakistani intelligence. Subsequent fighting between the two Taliban factions in Zabul province reportedly killed over 100 insurgents, including dissident Taliban leader Mullah Dadullah.

There also have been rumors that Akhtar Mansour may have been wounded or killed in a shoot-out near Quetta earlier this month as a result of the infighting. The Taliban deny Mansour was shot, and last week released what is purportedly an audio message from Mansour. But the credibility of the Mansour faction is low because it was Mansour who hid news of Mullah Omar’s death for so long.

The downside of the Taliban’s fracturing is that it could facilitate the rise of the so-called Islamic State (ISIS) in the region. ISIS has been attempting to make inroads into Afghanistan and Pakistan since at least January, when it announced the launch of its Khorasan branch. Khorasan is an Islamic historical term used to describe the area encompassed by Afghanistan, parts of Pakistan and parts of other countries in the region. According to the Hadith (sayings attributed to the Prophet Muhammad), south-central Asia maintains a key role in establishing a global caliphate, since the final battle between Muslims and non-Muslims before the end times supposedly will take place in the region.

ISIS militants have “successfully seized pockets of terrain from the Taliban in Nangarhar Province,” according to the Pentagon, and have begun broadcasting in local languages in the region to recruit young Afghans.

The situation in Afghanistan remains dangerously in flux. The uncertainty may tempt some U.S. officials to back away and allow the regional players to sort it out.

But that would be a mistake. Now, more than ever, the Afghan government and security forces need U.S. and NATO support to fight dual threats from the Taliban and ISIS.

The Afghan government also needs U.S. backing in its dealings with Pakistan. While Pakistan should be motivated by ISIS encroachment to push the Taliban leaders under its influence to the negotiating table, it is by no means clear that the Pakistani military sees it that way.

Until it is that evident Pakistan is using its influence to curb Taliban attacks in Afghanistan, the U.S. must not give Islamabad any concessions—nor expect its Afghan partners to do so.