Afghanistan Cannot Be Resolved in Isolation from Its Neighborhood 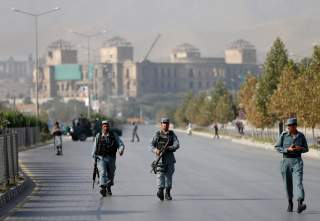 The most recent carnage in Afghanistan last Saturday that left over one hundred people dead has once again made clear that the threat from the Taliban, and now increasingly from ISIS as well, is not likely to disappear any time soon. Indeed the menace seems to be growing as the Afghan regime is increasingly immobilized because of the standoff between President Ashraf Ghani and his rival Chief Executive Abdullah Abdullah. Instead of providing stability the agreement between the two contenders for the presidency to share power has left the government paralyzed.

The spate of terrorist attacks seems to be intensifying with the emergence of ISIS in Afghanistan as a serious challenger to the Taliban in that arena. But it is not just terrorism that is a threat to the regime. The government, despite the support of eleven thousand American boots on the ground and the Trump administration’s promise to send in an additional four thousand troops, is steadily losing territory to the Taliban and its other challengers. According to a recent report by the Special Inspector General for Afghanistan Reconstruction, created by Congress in 2008, less than two-thirds of the country’s territory is under the government’s nominal control.

The Taliban has found it difficult to hold on to urban areas as their experience with Kunduz in northern Afghanistan in 2015 demonstrated. It is also true that their support is confined primarily to Pashtun-dominated areas and they have little traction among the Tajik, Hazara and Uzbek ethnic groups. But, given the multiple weaknesses of the regime, they have sufficient staying power to perpetuate a stalemate in the country and continue to make large parts of it ungovernable. As Seth Jones has put it succinctly, the Taliban are “too weak for victory, too strong for defeat.”

The increased American military presence, initially by four thousand additional troops, as promised by the Trump administration, is unlikely to make a substantial difference to this situation. This is the case because the administration and most analysts in the U.S. approach the Afghan conflict as a stand-alone issue largely isolated from what is happening in the region around it, especially from the interests and policies of its two major neighbors, Pakistan and Iran.

The administration has now begun to hold Pakistan responsible in part for the Taliban’s terrorist activities. It has also blamed Tehran for supporting the Taliban despite the unbridgeable ideological rift between Shia Iran and Sunni fundamentalist Taliban. But this is only the beginning of wisdom on the part of Washington and not a full realization of the fact that no solution to the Afghan conflict can be found unless it guarantees the fundamental interests of both Pakistan and Iran in that country as defined by Islamabad and Tehran respectively.

Pakistan has been an integral part of American calculations relating to Afghanistan from the time of the Soviet invasion of that country in 1980. It acted as the main conduit for the supply of American arms to Afghan insurgents fighting the Soviet-supported government. It is true that Islamabad gained in terms of arms supply and that Washington turning a blind eye toward Pakistan’s clandestine nuclear program until the Soviet withdrawal in 1989.

But, by and large, the United States saw Pakistan’s value to itself as instrumental in nature. This is why American and Pakistani strategies began to diverge immediately after the Soviet withdrawal from Afghanistan. While the United States basically left Afghanistan to its anarchical fate, Pakistan allied itself with a faction of Pashtuns, mostly products of religious schools in Pakistan, known as the Taliban (literally students) that eventually came to power in Kabul in 1994 with the support of the Pakistan army.

Although Pakistan was forced to go along with the American invasion of Afghanistan in 2001 because the Bush administration threatened to bomb it into the Stone Age, it secretly continued to support factions of the Taliban and other terrorist networks engaged in fighting American forces because it considered them potential assets in terms of its Afghan policy as well as its dispute with India over Kashmir.

It is this disjuncture in U.S. and Pakistani objectives that lay at the base of severe tensions that have now surfaced dramatically in Washington’s relations with Islamabad. These tensions came to a head early this year. In his first tweet on New Year’s Day, Trump singled out Pakistan for harsh criticism. The tweet was followed by the announcement that Washington was freezing nearly all security aid to Pakistan, which amounts to $1.3 billion annually.

Such actions demonstrate clearly that Washington is impervious to understanding the real reason for Pakistan’s involvement in Afghanistan. Pakistan’s foreign policy revolves primarily around its hostile relationship with its larger and more powerful neighbor India. Not only is India militarily superior in conventional terms, it demonstrated this superiority in 1971 when it divided Pakistan into two in a two-week war. It has further demonstrated its superiority by holding on to two-thirds of the disputed territory of Kashmir despite three wars (in 1947–48, 1965 and 1999) initiated by Pakistan to change the status quo in its favor.

For Pakistan, its policy toward Afghanistan is an extension of its policy toward India. A friendly regime in Afghanistan is considered essential by Islamabad to provide it defense in depth in any future conflict with India, which always seems to be around the corner. Pakistan was able to achieve this goal only briefly between 1994 and 2001 when the Taliban were in power in Kabul. Since 2001 it has seen the dice in Afghanistan loaded against it with India, under the protection of U.S. arms, making continuous political and economic inroads into that country.

The post–Taliban Afghan regimes have consistently favored India over Pakistan for their own reasons but also because they find that this jells better with the United States. The emerging U.S.-India strategic nexus in the Indo-Pacific region, epitomized by the civilian nuclear agreement between the two countries and the increasing weapons deals between them, has the Pakistani strategic community running scared.

This is the main reason why Pakistan refuses to give up its Taliban card in Afghanistan. According to Pakistan’s calculations, if nothing else, a sufficiently potent Taliban insurgency can both keep the country unstable and its government sufficiently off balance for Afghanistan to act as an Indian proxy both in times of war and peace. It also gives Pakistan leverage with the United States by driving home the point that no solution to the Afghan conflict can be found without Pakistan’s concurrence. Additionally, such concurrence will not be forthcoming without the United States realizing and conceding Afghanistan’s strategic value to Pakistan and agreeing to keep Indian influence in Afghanistan to an absolute minimum.

Iran, Afghanistan’s other large neighbor, also has major interests in Afghanistan and, just like Pakistan, has enough clout within Afghanistan to prevent any resolution of the conflict that does not protect its vital interests. Tehran would not like a Sunni fundamentalist regime, such as the Taliban, to rule over Afghanistan. In fact, Tehran almost went to war with the Taliban regime in the 1990s and vigorously supported the Tajik-led Northern alliance against the Taliban thus helping in its overthrow.

At the same time, Iran is interested in minimizing and if possible eliminating American presence in Afghanistan because of Washington’s hostility toward Iran that is reflected above all in President Trump’s stance on the nuclear deal with Iran. Left to him, Trump would have reneged on the deal a year ago when he came to power. He is constrained by the fact that it is a multilateral agreement that the other five members of the P5+1 find beneficial. Moreover, Tehran has scrupulously carried out its part of the bargain as testified periodically by the IAEA. Nonetheless, the Trump administration is clearly interested in jettisoning the deal if it is not changed to suit its interests or the interests of the Israeli lobby.

American hostility toward Iran helps no one but the hardliners in Iran that have always been opposed to the nuclear agreement. It has now also convinced many moderate and reformist members of the Iranian political elite that the United States is an inveterate enemy of Iran, and not just of its regime, and that it will not change its attitude toward Iran no matter how much the latter bends backwards to accommodate American interests. The gains made by the Obama administration in its relations with Iran are thus being frittered away.

Instead of using the JCPOA as the first step to improve relations with Iran, the preeminent power in the energy-rich Gulf, Washington under Trump is engaged in discrediting the moderate Rouhani government that is committed to holding up Iran’s part of the bargain. It is thus providing ammunition to President Rouhani’s hardline anti-American opponents by constantly deriding the nuclear agreement, imposing further sanctions on Iran unrelated to the nuclear issue, and preventing the average Iranian from enjoying the economic benefits he/she had expected from the nuclear deal.

Therefore, Tehran has no incentive to make life easier for the United States in Afghanistan. It has its own surrogates in Afghanistan, especially in central Afghanistan populated by the Shia Hazaras, and in Herat in western Afghanistan, which is a part of the Persian cultural zone, who can make life difficult for American forces in that country. It has also made tactical alliances with factions of the Taliban, although they are anathema to Shia Iran ideologically, and provided them with weapons, money and training as a part of its design to force American troops to leave Afghanistan.