Is Afghanistan the Capital of a New Terrorist Empire? 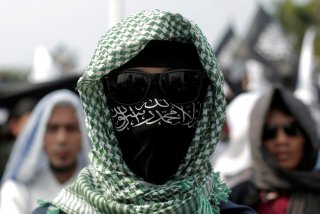 The Taliban’s rapid conquest of Afghanistan has taken many by surprise, but the commentariat has moved just as expeditiously in assessing its impact on U.S. national security. Conversations have largely concentrated on whether the Taliban will aid or abet another 9/11 “mega-terrorist attack” against the United States, thereby forcing Washington to once again assault the “graveyard of empires.” Given the U.S. experience with both Afghanistan and Al Qaeda—which retains a significant presence in the country and reciprocal loyalty to the Taliban—this fear is understandable, but it is equally specious.

After twenty years of war, the Taliban appears to have learned some lessons about the value—or at least the appearance—of moderation. The group is explicitly promoting its intention to respect women’s rights, within the bounds of Sharia law, of course; engaging with female journalists and stopping others from being harmed; and promising to engage with the international community on the basis of “peaceful relations.” Those advising skepticism towards the avowed terrorist group do not need to belabor the point, but we should not overlook the fact that, like America, the Taliban, too, is not interested in more war—especially if it wants to run its country as its very own Islamic Emirate.

In this regard, the Taliban may “reform” along the same lines as another purportedly rehabilitated terrorist group, Lebanese Hezbollah. As Matthew Levitt wrote in Hezbollah: The Global Footprint of Lebanon’s Party of God,

Ironically, al-Qaeda’s September 11 attacks proved to be a turning point for Hezbollah, the group responsible for the deaths of more Americans than any other terrorist group until September 11. Desperate not to be caught in the crosshairs of Washington’s “war on terror,” Hezbollah appears to have consciously decided to roll back its international operations and keep its efforts to strike at Israeli targets as focused and limited as possible.

Could the Taliban learn from Hezbollah? The two groups do share some commonalities: Both were heavily scrutinized and pressured by the United States in the aftermath of 9/11, position themselves as defenders of the Islamic faith, and engage in prodigious criminal behavior to fund their activities. But Hezbollah is no longer the mere terrorist insurgency that it once was; the group is now an accepted political actor in Lebanon and among some in the international community—where various countries differentiate between the group’s “legitimate” political and “terrorist” militant wings, a distinction without a difference that the group has leveraged to its advantage. The Taliban likely views its status with envy.

Indeed, Hezbollah has worked tirelessly to remove itself from the shadows, building grassroots legitimacy through social outreach that focused on fighting corruption and restoring dignity to Lebanese after years of civil war and Israeli occupation (a notable similarity to the Taliban’s promise to fight corruption and end the U.S. occupation). Over time, Hezbollah began offering services, a system of Islamic courts in parallel to the state’s courts, and even education to develop a loyal and growing constituency. It even attained representation at the parliamentary, ministerial, and municipal levels of government—establishing a true “state within a state” where, Chatham House’s Lina Khatib has noted, the group wields immense political power without the trappings of accountability that typically constrain state institutions. This arrangement—which Iran is aiming to reproduce through Iraq’s Popular Mobilization Forces—has allowed Hezbollah to co-opt the Lebanese state for its own devices, siphoning state resources towards its own interests; employing force at its own discretion; and manipulating state security institutions to falsify security documents, weaponize intelligence collection, smuggle weapons and contraband, and surveil Lebanese across the country.

Yet the Hezbollah case study is only so useful for the Taliban, which as the sole sovereign of Afghanistan must appeal to a heterogeneous constituency—not only Lebanon’s Arab Shia population—and is seeking to fashion its own government, not burrow into an existing one. Accordingly, Yemen’s Houthis provide a helpful corollary. In its war to depose the internationally recognized government and to take over Yemen, the Houthis have had to both contend with internal, rival tribal factions and an external Saudi Arabian-led coalition that includes the United States. Al Qaeda in the Arabian Peninsula is also actively fighting in the country, although, in contrast to Afghanistan, this Al Qaeda branch has paradoxically partnered with U.S. allies to roll back the Houthi’s advances.

But the value of the Houthi’s example for the Taliban does not end there. As it progressively conquered Yemen, the Houthis utilized intelligence files and records seized from the Yemeni government to foster alliances and “tribal solidarity” with local clans and recruited members from the transitional government’s Ministry of Defense. In a similar manner, the Houthis partnered with the ousted former president Ali Abdullah Saleh—an official it once helped overthrow—in 2015 to assist its takeover of the Yemeni capital, Sana’a, capturing an array of heavy weapons and ballistic missiles and gaining access to the government’s intelligence services, whose capabilities it drafted into its war machine. From this point onwards, Michael Knights wrote for West Point’s Combating Terrorism Center, the Houthis “forced the demobilization” of military forces loyal to Saleh while enlisting “indispensable individuals” in order “to bring all critical capabilities ‘in-house’ and disarm all potential opposition.”

Although the Taliban’s challenges don’t exactly parallel the Houthi’s struggles, Afghanistan does share Yemen’s tribal structure, and the Taliban appears equally interested in subsuming willing elements of the defunct Afghan government’s intelligence and security apparatus into its new regime. Just like how the Taliban employed local tribal elders to broker ceasefires and surrenders with Afghan National Army forces in the months preceding the government’s collapse, the Taliban will need to rely on a mixture of diplomacy, coercion, and inducements to find allies, or at least convince disgruntled and distrustful clans to not take up arms against it. Consequently, the Taliban’s extension of amnesty to members of the former Afghan government’s civilian and military institutions and confiscation of U.S. and Afghan intelligence files may be a boon for the group, if it plays its cards right.

Garnering international recognition and assistance are also priorities for the new Afghan government, which has no shortage of challenges ahead of it. However, unlike the Houthis and Hezbollah, the Taliban has already established diplomatic relations with a number of leading countries, including Russia, China, and the United States. But the Taliban must tread carefully in how it conducts its business. Despite being an ostensibly nationalist organization, the world is carefully watching how it plans to govern, and any missteps—like, for instance, hosting terrorist groups—could put its sovereignty, reconstruction, and external relations at risk. This is particularly true when it comes to avoiding international sanctions, especially those levied by the United States.

However, the Islamic Emirate of Afghanistan may have found an ally in the Islamic Republic of Iran that has a long track record of resisting U.S. sanctions and adapting its behavior to satisfy international partners while continuously cooperating with terrorist and militant organizations. Notwithstanding Iran and the Taliban’s fraught relations at the end of the twentieth century—the two countries nearly fought a war in 1998, precipitating Iranian support for the George W. Bush administration’s toppling of the Taliban in 2001—the two have largely bridged their divide in recent years over common objectives like defeating the United States in Afghanistan.

Today, Tehran has much to teach the Taliban, as the Islamic Republic pioneered two strategies that have been implemented by Shia militants to attain power and legitimacy across the Middle East. The first is the deliberate assimilation of an existing governmental body into a new regime. As has been reproduced by its proxies in Lebanon, Yemen, and Iraq, Iran’s feat originated in the early days of the Islamic Republic, when Ayatollah Ruhollah Khomeini incorporated members of the deposed shah’s SAVAK secret service into his new internal security and intelligence force, SAVAMA, which today operates as Tehran’s Ministry of Intelligence.

Likewise, in the years since, Iran has implemented a second strategic change by altering its modus operandi from committing conspicuous acts of transnational terrorism (i.e., suicide bombings) to relying on formalized proxies to serve its security interests. Notably, Iran’s decision to supplant what Hassan Hassan calls an “international terrorist campaign organized by a radical, stateless vanguard” with “state-sponsored Shiite militancy” has lent the appearance that Tehran’s pugnacity by proxy is a legitimate exercise of its power, as states around the world engage in similar behavior. Moreover, this trend has permeated throughout Iran’s proxy forces, which, like Al Qaeda, have undergone parallel conversions in focus: giving up on targeting the “far enemy”—the United States and the West—to cultivate local, populist political ventures. This has provided political cover for states like Russia and China to partner with Iran—despite their anxiety about Islamic extremism and terrorism—in pursuit of joint economic and geopolitical goals.

The Taliban may also harbor analogous designs. Whereas the Taliban has forthrightly advertised itself as a nationalist project, it potentially holds a long-term vision of global jihad as well. If that is the Taliban’s true objective, then its relationship with Iran could prove invaluable. Iran is not only eager to improve its relationship with the Taliban—Tehran is keeping its embassy open in Kabul, denying asylum to Afghans fleeing Taliban control, and looking to expand bilateral trade as a means to mitigate the sting of U.S. sanctions—but it has also maintained a years-long relationship with Al Qaeda and shares the Taliban’s hatred for ISIS. While Iran’s rapport with Al Qaeda is more of an uneasy marriage of convenience than an alliance forged in mutual allegiance, a new, burgeoning Tehran-Kabul axis bent on gradual and protracted jihad could change the nature of that relationship. For example, Iran could release some of the Al Qaeda leaders residing within its borders into Afghanistan, or use its experienced Afghan Shia militia, the Fatemiyoun Brigade, to bolster an Afghan-Iranian security partnership. The possibilities are concerning, even if the outcome is far from certain.