Afghanistan Is Finally Standing Up to Pakistan 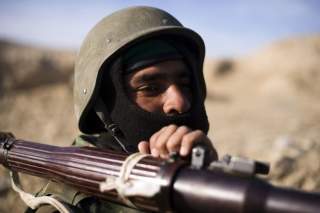 As the first president of Afghanistan following the toppling of the Taliban, Hamid Karzai’s legacy will always be decidedly mixed. The famously mercurial Karzai masterfully navigated the traditional tribal politics of Afghanistan, but arguably laid the groundwork for much of the corruption and weak governance that plague the Afghan government today. During his tenure, Karzai often made headlines by frequently excoriating Pakistan for harboring the Afghan Taliban and attempting to rule Kabul by proxy. When Ashraf Ghani, a former World Bank official and development specialist, came to power in 2014, he attempted to reset relations with Islamabad—even shelving a request for military assistance from India, Pakistan’s principal rival. It did not take him long to reconsider.

Less than a year into his tenure, Ghani reversed course, saying he believed Pakistan was conducting “undeclared war” on Afghanistan. Following a Taliban bombing that killed more than sixty people in Kabul in April, Ghani blasted Pakistan for providing sanctuary to the group and told the Afghan parliament he would complain to the United Nations Security Council if Islamabad failed to take action. “We don’t expect Pakistan to bring the Taliban to talks, but we ask the Pakistanis to fulfill the promises they made . . . and launch operations against the people who have sanctuaries in Pakistan,” he said. Ghani’s frustration with Pakistan’s lack of action has surely been stoked by the fact that since the U.S. military drawdown at the end of 2014, the Taliban surged, now controlling more territory in the country than at any time since the 2001 invasion, and civilian casualties continue to rise at alarming rates.

Back in May, when the late Taliban leader Mullah Mansour was killed by a U.S. drone strike, he was driving through the Baluchistan—a western Pakistani province bordering Iran—with a Pakistani passport. It is widely known that Quetta, the provincial capital of Baluchistan, is home to the Quetta Shura, the leadership of the Afghan Taliban. There have been other prominent examples demonstrating that Taliban leaders have been operating in Pakistan. When Afghan officials met with Taliban delegates at the Pakistani resort of Murree in July 2015, it was widely known that they were traveling from within the country. Last year, the Afghan government revealed that the Taliban’s late leader, Mullah Omar, died in a hospital in Karachi, Pakistan in 2013. And if anyone questions the ability and willingness of the Pakistani intelligence services and military to aid and abet extremists, let’s not forget that Osama bin Laden was eventually found in Abbottabad, Pakistan, close to a military compound.

While Islamabad has long denied that it harbors and supports insurgent groups, a 2010 report by Matthew Waldman for the London School of Economics revealed more than just furtive cooperation. Indeed, “This goes far beyond just limited, or occasional support. This is very significant levels of support being provided by the ISI [Pakistan’s intelligence agency]. We're also saying this is official policy of that agency, and we're saying that it is very extensive,” Waldman said.

But the reality is that this support is an open secret. In a candid admission this March, Sartaj Aziz, a foreign policy adviser to Pakistan’s prime minister, told a crowd at the Council on Foreign Relations in Washington, “We have some influence on them [the Afghan Taliban] because their leadership is in Pakistan and they get some medical facilities, their families are here.”

Meanwhile this year, the Quadrilateral Coordination Group (composed of Pakistan, the United States, Afghanistan and China) has failed to bring the Taliban to the negotiating table during several rounds of talks. On July 12, Afghan presidential spokesmen Haroon Chakhansuri told the Associated Press that Kabul had no plans to revive the peace process. Simultaneously, Afghan CEO Abdullah Abdullah’s spokesman Javid Faizal accused Pakistan of failing to keep its promise to cease support for the Taliban and bring the group to the negotiating table. Pakistan “is still supporting the insurgency, providing medical facilities, training, financing, which shows they have not kept their promises to make the Taliban join the peace process,” he said.

In recent months, Pakistan’s pernicious Afghan policy has come under heavy criticism in Washington. In testimony before the House Foreign Affairs Committee, former U.S. ambassador to Afghanistan Zalmay Khalilzad noted that while most states have a gap between their declared and actual policy, “In the case of Pakistan, the gap is huge.” Indeed, “Pakistan’s current policy and conduct would better merit its inclusion on the State Department’s list of state-sponsors of terrorism,” the former envoy argued. With the Taliban now on the offensive, Khalilzad argued that “the Taliban’s resilience can be attributed above all to the strategic decision of the Pakistani military and intelligence services to provide sanctuary and support to these groups.”

With many on the Hill advocating for a cessation of U.S. assistance to Pakistan, Khalilzad also told lawmakers that the drone strike against Mansour has “created a golden hour to confront Pakistan” and force it to choose between its support for the Taliban and the Haqqani network, or its relationship with the United States, and the attendant economic and international support that it provides to Islamabad. Aziz’s surprising confession and the circumstances surrounding Mansour’s killing—let alone the host of other incriminating evidence—provide the perfect opportunity for the United State to increase pressure on Pakistan, ignore Islamabad’s dissembling and push for an end to support for the Taliban. After all, as Khalilzad notes, “Pakistani policy is the principal cause of the ongoing conflict in Afghanistan.”

The war in Afghanistan is now America’s longest, and it has spent more in inflation-adjusted dollars than on the Marshall Plan. Following a recent decision, President Obama will leave office with 8,400 U.S. troops in country, passing the baton on to the next president. Over the last fifteen years, the war effort has been consistently undermined by Islamabad’s duplicitous Afghan policy. There has been considerable hand-wringing within the Obama administration regarding troop levels, and much less public discussion of Islamabad’s role in Afghanistan. With an increasingly dangerous Islamic State wing, which recently just conducted the biggest attack in Kabul in years; Al Qaeda’s continued presence; and an unbowed Taliban, Washington is doing itself no favors by ignoring Pakistan’s support for extremist groups.

Long before Islamabad was even admitting that the Afghan Taliban were residing in Pakistan, Karzai cogently analyzed the Afghan war and a critical reason for its intractability, albeit without conventional diplomatic tact. If the next president hopes to bring the Afghan war to a close and leave the country on a viable path for prosperity and security, she or he will have to pressure Pakistan to change course. Just ask Hamid Karzai; he’s been saying so for years.

Adam Gallagher is a writer and editor based in Washington, DC. He is a senior writer for Tropics of Meta and his work has appeared in the Huffington Post, the National Interest, the Diplomat, and for the Carnegie Endowment for International Peace, among other outlets. He can be followed on Twitter @aegallagher10.