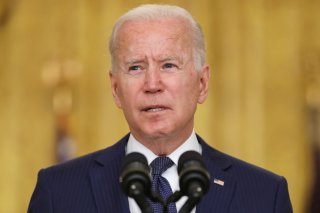 On August 26 a suicide terrorist detonated his jacket of explosives near the sewage ditch where thousands of Afghans had gathered at the edge of the airport in Kabul and killed not only himself but more than 180 people.  Among them were eleven American Marines, an Army soldier, and a Navy medical corpsman.

In Washington Joe Biden, the president who had ordered that the evacuation of Americans and their allies be accomplished by August 31 so that his new Administration could celebrate finally ending the Afghanistan war on the twenty-year anniversary of the 9/11 attacks was, characteristically, remaining out of sight.  His election campaign had largely taken place in the basement of his home in Delaware, minimizing his tendency to make public gaffes.  After the American military was ordered to occupy the Kabul airport following a blitzkrieg of sorts by the Taliban that toppled the Afghan government, he disappeared for days inside the protected isolation of Camp David or at his home in Delaware, from whence he would appear from time to time to read a set of carefully prepared remarks and then again disappear without taking questions.

Vice President Kamala Harris was finishing up a quick trip to Singapore and Vietnam and skipped a stop in California on the way home where she had intended to campaign for its embattled governor as he fends off a voter recall to throw him out of office.  At no point in her Asia trip did the Vice President speak directly about the ominous forced error in Afghanistan that had been initiated by the Biden Administration, although the world was waiting for reassurance from America’s top leadership as events on the ground morphed out of control.   In a remarkable display of tone-deaf diplomatic naiveté, the Vice President was pictured sitting in front of a sculpture of Ho Chi Minh during a meeting with Vietnam’s President Nguyen Xuan Phuc at the very moment the rest of the world was comparing America’s humiliating and incompetent dilemma in Kabul with the 1975 fall of Saigon.

In Kabul, America’s capability to conduct an orderly withdrawal from Afghanistan had turned into a disgusting nightmare of incompetence that can only be rectified by holding those responsible accountable.  A midnight abandonment of America’s most important airbase in Bagram on July 2 had put a double hex on a proper retrograde from the country, first by giving up a large-scale aviation platform whose massive runways and extensive outer perimeter made it eminently usable and defendable, and second by allowing the Taliban to release thousands of rabid terrorists who had been imprisoned there and were now on the loose.  In Kabul, American military units were largely forbidden to leave the airport to rescue and escort Americans and allied Afghans back to the airport.  An agreement was reached where the conquering Taliban controlled the checkpoints outside.  To make matters impossibly worse, American officials in Kabul were reported to have given the names and locations of some of our citizens and close allies to the Taliban, supposedly for the purpose of expediting their efforts to leave the country but in reality, simplifying the Taliban’s search for the very people whose lives depended on escaping from their clutches in the first place.

In Washington and in command centers elsewhere, those who had concocted this planned withdrawal, both military and civilian, were filling the airwaves with the usual “not me” rhetoric that has sidestepped accountability and enabled promotions, advances, and post-career financial rewards for the past twenty years.  The roots of how we reached this final imbroglio can be found in the decisions that were made not just at the end but all along the way.  And in the painful events of these final weeks, there are blatant indicators as to how we must rid ourselves of this political pox and proceed into the future.

We should start with a truism.  Wars have beginnings and they have ends.  The ends for one and sometimes both sides are not always what the combatants initially envisioned.  And in the case of Afghanistan, the war that we began was not the same war that we are finally bringing to an end.  When we went into Afghanistan in 2001 our national concern was to eliminate terrorist entities who desired to attack us.  The common understanding at the time was that we would operate with maneuver elements capable of attacking and neutralizing terrorist entities.  It was never to occupy territory with permanent bases or to attempt to change the societal and governmental structure of the Afghan people.  This “mission creep” began after a few years of successful operations and was obvious in 2004 when I was in the country as an embed journalist.  The change in mission eventually increased our troop presence tenfold and sent our forces on an impossible political journey that no amount of military success could overcome.  The Afghans are a hardened, decentralized people marked by a thousand years of resistance to outside change.  The country is also a narco-state, the largest exporter of opium in the world.  The friendly warlord who welcomes your presence and financial reward for the moment is also quite often a drug lord.

It was a correct judgment to bring to an end the unwinnable war to reshape Afghan society through military pressure while preserving our effort to monitor terrorist and other activities that might harm us.  But we erred greatly in how we should have gone about this.

First, our negotiators seem to have learned nothing from the negotiations that brought about the tragic way the war in Vietnam ended, where the South Vietnamese government was not made a direct part of the negotiations with communist Hanoi.  This diplomatic disrespect affected the validity of the final agreements and undercut the credibility of the South Vietnamese once America pulled out its military forces and its direct support.  The same flaw pervaded negotiations with the Taliban, with the internationally recognized Afghan government diminished to the role of a co-signer once agreements between the United States and the Taliban were reached.

Second, and directly relevant to the events of recent weeks, another truism:  complex military movements require planning that prepares for the worst possible scenario while hoping for the best possible result.  A withdrawal of such magnitude after twenty years of military presence, involving not only the American military presence but also an evacuation of American civilians, many of whom worked directly on the war effort, and Afghan civilians who literally placed their lives on the line to work with us, must always be accomplished with structural care and under the umbrella of a strong and credible warning to opposing forces.

When I went through Marine Corps training during the Vietnam War, the different types of military retrogrades were taught and discussed.  Retrogrades are basically shrinking perimeters, with tight security protecting those who are inside the perimeter until the perimeter has been reduced to the main security elements, who are the last to leave.  In the extraordinarily complex case of Afghanistan, Bagram again would have been a perfect final perimeter to accomplish this.

From the very outset, one searches in vain for evidence that our senior military and civilian planners came up with anything that indeed prepared for the worst while hoping for the best.  They bureaucratized necessities such as the visa process for those Afghans who wished to leave with little emphasis on the urgency that would take place if the Taliban moved more quickly than our planners predicted—which happened.  The Biden administration and the military squabbled over how best to use a small military presence, finally deciding on Kabul without discussing worst-case scenarios—which occurred.  As General Mark Milley summarized in a recent briefing, the decision to abandon Bagram and to use Kabul was made because “we had to collapse one or the other.”  The end result was that the retrograde came nowhere near a basic formula that could move military units and also provide a pathway for other Americans and proven Afghan allies to move inside the security bubble and then out of the country.  Instead, those people were left outside and many of them remain outside, now with the Taliban to judge and perhaps execute them.

Contrary to the prevailing media rhetoric, assisting our Vietnamese friends after the fall of Saigon in 1975 does not provide a mirror of the unexplainable incompetence that we have witnessed in Afghanistan.  Tactically, what we have been seeing in Kabul is more similar to the situation at the Beirut airport in October 1983, where 241 Americans, mostly Marines, were killed by a truck bomb:  a fixed target near a city center, a small military footprint, an inability to construct an outer perimeter, and terrorist attackers who wanted to die.

Operation Frequent Wind in 1975 remains a testimony to the dedication and quality of our military leaders at that time, and of the thought and preparation that went into assisting our South Vietnamese allies once the war drew to a close.  South Vietnam’s fall took place under much different circumstances.  It was an ally that had suffered more than 220,000 combat deaths out of a population only half of today’s Afghanistan, and whose government was indeed an emerging democracy.  The U.S. Congress had tied the hands of our military to directly assist South Vietnam after our troops were withdrawn in 1973.  And South Vietnam’s demise was guaranteed by the avowedly antiwar Watergate Congress elected less than three months after President Richard Nixon was forced to resign, whose first legislative act was to cut off a supplemental appropriation to the beleaguered South Vietnamese military when the North Vietnamese had geared up for a massive “final offensive” with the help of the Soviets and Chinese.