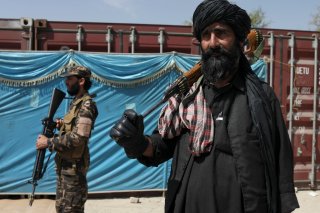 What’s the difference between Afghanistan and Ukraine? Not as much as you might expect.

Ukraine and its resistance have captured the Western imagination in a way Afghanistan never did. European leaders and Congressional delegations head to Kyiv to have their photographs taken with Ukrainian president Volodymyr Zelenskyy with an urgency few did with former Afghanistan president Ashraf Ghani: Western politicians know they gain more from being seen with Zelenskyy than vice versa.

It is likely that the Biden administration wishes to forget that it initially counseled Zelenskyy’s surrender. The Ukrainian leader rose to the moment and showed himself to be more Winston Churchill than Neville Chamberlain. He inspired his countrymen to fight for a cause in which they believed and against an enemy against whom they could unite. The ramifications for the liberal order would be disastrous had Zelenskyy chosen differently.

Ghani was no Zelenskyy. For years prior to Kabul’s fall, first Donald Trump and then Joe Biden counseled compromise. Ghani resisted at first—the privileges of power were vast, and he never believed the United States would follow through with its threats to leave the country—but, when push came to shove, he fled his palace in the middle of the night, handing the capital city to the Taliban. The Taliban, in victory, quickly dashed any hope that they were different from the radical, repressive force that dominated the country in the years immediately prior to the September 11, 2001, terror attacks.

While Biden may wish to put Afghanistan behind him, deflect blame, and tarnish all Afghans with the actions of their former president, the reality is many Afghans never gave up the fight. Freed from Washington’s efforts to micromanage the Afghan politics, true leaders have arisen who refuse to accept the subjugation of their people.

Consider the case of Ahmad Massoud, the son of the late “Lion of the Panjshir” Ahmad Shah Massoud. The U.S. Embassy in Kabul might have spent millions of dollars in polling to tell them how Afghans felt outside the embassy compound’s walls, but those polls were always snake oil: A far better way would simply be to drive around the city and into the countryside. In my years visiting Kabul and its environs, portraits of Massoud became more numerous and prominent than Afghanistan’s top elected leaders in shops, homes, and on billboards.

Even if Biden does not believe his withdrawal was an error, its timing surely was. He ordered the U.S. evacuation in the summer at the height of Afghanistan’s fighting season when the Taliban was most mobile. Had the United States waited until winter, it might have given Afghans a chance to entrench and prepare to the battle the Pakistan-backed group. After the winter snows froze the Taliban’s gains in place, Western politicians erred again when they confused silence with acquiescence.

No longer. In recent weeks, Massoud’s National Resistance Front launched its spring offensive. It was able quickly to take most of three districts in Panjshir, a district in Takhar, and several villages in Andarab. The Taliban lost considerable local credibility when its spokesman denied fighting in the north while media disseminated photographs of dead fighters and coffins transported to Helmand and Kandahar. Massoud’s forces then ambushed Taliban reinforcements, inflicting casualties on the Taliban force in southern Panjshir and in the Abdullah Khel district. Compounding the Taliban’s problems are is the fact that reinforcements from southern Afghanistan are like fish out of water in Panjshir and the surrounding valleys.

The Taliban also lost fighters and vehicles in Qasan village in Andarab. There have been similar ambushes of Taliban forces in northern Kabul, Parwan, Kapisa, Takhar, Baghlan, and Badakhshan. The Taliban, therefore, now face resistance across hundreds of miles.

Importantly, the Taliban have not been able to take any National Resistance Front bases in a counterattack. In effect, what Massoud’s force now is doing in the Panjshir Valley and elsewhere in Afghanistan is reminiscent of the initial Ukrainian resistance against the Russian onslaught. And, just like Russia did in the face of resistance, Taliban forces are taking civilian hostages and conducting summary executions around Andarab, perhaps believing that retaliating against relatives of resistance fighters will demoralize them. To the contrary, however, it appears to solidify and motivate the resistance. Taliban brutality has also led many non-Pashtun to defect to the National Resistance Front. The most senior defector so far was Commander Malik, who served as the intelligence director for the Taliban police in Panjshir.

Momentum matters in Afghanistan. I learned this the hard way while visiting Mazar-e-Sharif in 1997. I went to sleep in an area controlled by non-Taliban forces, with the front-line dozens of miles away. When I woke up, the Taliban were marching on the city after convincing a neighboring warlord to defect. (The Indian Embassy in Uzbekistan helped evacuate me to Termez, just across the Afghanistan border).

The Taliban consolidated power and by 1998, controlled perhaps 90 percent of the country. As Afghans living under them told me when I visited the Taliban’s emirate in March 2000, they were a house of cards. It was not surprising to see the rapidity of their collapse in October 2001 in the face of overwhelming U.S. and NATO firepower. Only when Washington began to signal exhaustion did the Taliban really rebound. Now, however, it is the Taliban’s turn to face a crisis of momentum.

The Taliban’s losses so early in the spring show the competence of the National Resistance Front. Without outside assistance and against an enemy armed to the teeth, Massoud’s forces show victory to be possible. In effect, Afghanistan today is like Ukraine two months ago. Ukraine’s victories discredited intelligence assessments about Russia’s potency that, in retrospect, seem silly. So too does the narrative that Taliban are unchallenged in Afghanistan and that they have consolidated control.

President Joe Biden and Congress are right to fund Ukraine. It would be unconscionable for any official in Washington or the West would suggest funding Russian occupation zones in the name of alleviating the suffering that the Russians themselves caused. It is no less crazy, however, to pump tens of millions of dollars to the Taliban regime in the name of humanitarian relief. Donor motives might be pure, but that money does not achieve its goals. The Taliban steals and diverts it. At the very least, it helps the Taliban solidify control.

The United States need not actively fund Massoud and the Afghan resistance, but it should recognize the Afghan Zelenskyy when it sees it and stand out of his way. Massoud’s success is apparent to anyone who looks. It is time to let the Taliban fail.