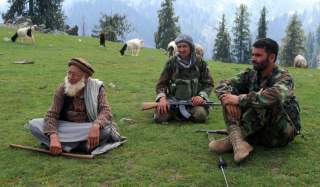 THE FIRST significant round of negotiations between the Afghan state and the Taliban essentially came to an end on May 21, with the killing by an American drone strike of Mullah Akhtar Muhammad Mansour on the Pakistani border with Afghanistan. The Obama administration, it appeared, had abandoned hopes of successful talks with the Taliban in favor of a military-led strategy of decapitating the movement and provoking its fragmentation as a result. Leading figures in the Afghan government and security forces have urged Washington to adopt this strategy.

The death of Mullah Mansour did not fracture the Taliban, as hoped. Its leadership has come together to choose a new titular head, Maulavi Haibatullah Akhunzada, a respected religious figure, with an enhanced role for his deputy, Sirajuddin Haqqani, successor to his father Jalaluddin as effective leader of the formidable Haqqani network. This leadership would seem to be, if anything, even less pragmatic than that of Mullah Mansour. Meanwhile, Washington has emphasized the Haqqani network’s links to Al Qaeda and other terrorist groups.

Afghanistan will likely endure years more of conflict, and the United States will have to retain air power and special-operations forces to prop up the faltering Afghan National Army and to prevent the country from succumbing to its fissiparous tendencies. America will also almost certainly have to intervene repeatedly in Afghan politics in order to prevent political and ethnic rivalries from tearing the state apart, as they have done so often in the past, and—judging by what I saw and heard during recent visits to Afghanistan—as they are quite capable of doing again, even without the Taliban’s help.

The collapse of the peace process has led to further deterioration of relations between Afghanistan and Pakistan, and between Pakistan and the United States. The Afghan government, and most U.S. officials, are convinced that Pakistan was never sincere about the peace process, and that its strategy is based on supporting the Taliban. The Pakistani establishment is convinced that Washington and Kabul were never sincere about the peace process, and that their strategy was to use peace talks to dismember the Taliban and provoke Pakistan into launching a new war against those remnants on its own soil. There is a good deal of truth to both propositions—but not the whole truth. Enough nuances remain in all sides’ positions to accommodate a renewed peace process, though probably not for several years.

Before peace talks can resume, the basic negotiating positions of the Taliban and the Afghan government will have to move a great deal closer together. Given the distance between them at present, there was never a chance of an early agreement; President Ashraf Ghani was foolish to give an impression otherwise. His mismanagement of expectations has led to increased disillusionment and bitterness on the Afghan side. Almost all peace processes have lasted a very long time and have been accompanied by continued fighting as even the more pragmatic elements on both sides seek to improve their bargaining positions.

This does not, however, make such initial talks (and the “track two” informal discussions between nonofficial elements that often run in parallel) pointless. Without them, it is impossible to establish the credibility of the negotiating partners, build basic mutual trust and learn the irreducible “red lines” of both sides. Without this, one cannot know whether there is anything to talk about, or whether the basic aims of the two sides are so utterly opposed that the only outcome can be complete victory for one, or—in deeply ethnically divided societies—partition and the exchange of ethnic populations.

In the case of the Afghan peace process over the past two years, unrealistic expectations of early progress were closely linked to unrealistic expectations in the United States and Pakistan that the other country is willing and able to push its respective clients towards a settlement, and will abandon them or (in the case of Pakistan) turn on them if they fail to obey. In the case of U.S. and Afghan government approaches to Pakistan, these hopes were not accompanied by either pressure or incentives on anything like the scale that would have been necessary to get Islamabad to reverse its long-term strategy and to adopt a position that most Pakistanis would see as acutely unfavorable for Pakistan.

WHAT ARE the basic positions of the Afghan government and the Taliban when it comes to peace? It is not possible to speak with certainty in either case, for the simple reason that neither side has set out its peace terms. The Taliban is also, of course, extremely opaque and not in the habit of giving press conferences in which one can interact with its leaders. Nonetheless, from public statements and private meetings that I have conducted over the past three years with Afghan officials and with figures close to the Taliban, the following would seem to be a reasonably accurate representation of the present positions of President Ghani’s followers and of the more pragmatic elements in the Taliban.

The Afghan government has repeatedly stated its position that the Taliban must accept the constitution and lay down its arms, in return for which they would be accepted into politics and allowed to run for office. This would presumably be accompanied by an amnesty for Taliban members. The model appears to be the deal aimed at with Gulbuddin Hekmatyar and his Hezb-i-Islami party. A delegation from the Hezb visited Kabul during my stay there in May and conveyed its terms: Hezb would abandon its campaign against the state and join the political fray in exchange for government jobs and homes for its fighters. Though Hekmatyar has since retracted the offer (citing a lack of commitment to the eventual withdrawal of U.S. forces), Hezb representatives are already sitting in parliament.

The Taliban, however, sees Hezb’s approach as surrender. Everything I know of the Taliban, and have been told by people close to its members, indicates that surrender is not an option. Take the Haqqanis, who for almost forty years have fought with an iron resolve against two superpowers, their Afghan allies and any Afghan regime they regard as illegitimate. Is there anything in this record to suggest that they are going to give up now, when they think that they are gradually winning?

As to the Taliban’s own terms for peace, it is important to understand two things: the divisions among the Taliban concerning peace; and the distinction between points of principle and points of substance (or power) in their aims.

From interviews with figures close to the Taliban, I formed the impression that the key division among members over the peace talks does not jibe with what most Western analysts perceive. It is not simply a question of ideological “moderates” versus “hardliners.” On the one hand are those who believe that complete military victory is possible, leading to the restoration of the Islamic Emirate as it existed before its destruction in 2001; on the other hand are those who believe such a victory impossible, given the array of national and regional forces opposed to the Taliban and the changes in Afghan society that have taken place since 2001. People of the latter persuasion believe that sooner or later a peace settlement will have to be negotiated, if Afghanistan is to escape unending warfare and avoid de facto partition.

Even these Taliban adherents (whom Mullah Mansour was rumored to be among) are implacably opposed to anything that looks like surrender and are willing to go on fighting for a very long time in order to improve their position at the eventual negotiating table. Moreover, the boundary separating the two groups is not fixed but fluid because it is constantly being shaped by progress or the lack thereof on the battlefield and by perceptions of the fragility or durability of the government in Kabul. According to a Pakistani journalist who spent time with the Haqqani network earlier this year, whom I interviewed, the great majority of the commanders and fighters loyal to the Haqqanis are strongly opposed to peace talks and believe in fighting on to complete victory. If Sirajuddin Haqqani has a different view, he has not given any indication of it.

Nevertheless, from my own meetings, other published materials and the suggestions emanating from the Pugwash meetings with Taliban representatives, it is possible to cobble together the pragmatic Taliban’s minimal conditions. These can be divided into elements of principle and elements of power. Most Western analysis points to issues of principle as the main obstacles to an agreement. (Crucially, no one I have spoken with on the Taliban side has described the exclusion of international terrorists as an obstacle to peace, especially since ISIS appeared in eastern Afghanistan and began recruiting Taliban dissidents and launching murderous attacks.)

The chief points of principle for the pragmatic Taliban are the complete withdrawal of non-Afghan forces and a new constitution to be agreed by a national assembly (loya jirga) and premised on the notion that sovereignty comes from God.

Concerning the first point, the current U.S. basing agreement expires in 2024. So long as U.S. forces stick with that schedule—rather than retaining permanent bases as part of a strategic rivalry with China and Russia—the withdrawal question could be a moot point.