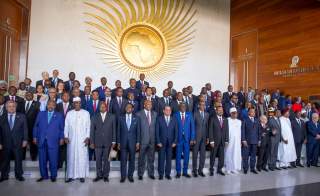 After the west African nation The Gambia ratified the African Continental Free Trade Area (AfCFTA) in April, the twenty-two-nation threshold needed for the trade pact to come into effect has now been reached. This is great news for Africa, because not only will a continent-wide free-trade area boost the region’s economy, but the AfCFTA represents an important ideological shift away from the socialist tendencies that have haunted much of the continent since its independence.

Unfortunately, most African nations fully embraced the socialist economic model when they were freed from their colonial rulers. As the president of the Free Africa Foundation George Ayittey notes, “capitalism was identified with colonialism, and since the latter was evil and exploitative, so too was the former.” Quite simply, socialism “was advocated as the only road to Africa’s prosperity.”

Africa’s socialist experiment started in 1957, when Ghana became the first nation on the continent to be granted their independence. Ghana’s first leader Kwame Nkrumah was a self-proclaimed “Marxian Socialist,” and encouraged other African states to seek independence and pursue the “complete ownership of the economy by the state.”

Many African leaders followed Nkrumah’s socialist example: Modibo Keita of Mali, Sekou Touré of Guinea, and Leopold Senghor of Senegal—just to name a few. These rulers were often dubbed “the main architects of African Socialism.” But in spite of their early socialist influence, today, all four of these countries are opening themselves up to freedom with the AfCFTA.

In 1963, the Organization of African Unity (OAU)—the predecessor to the African Union (AU)—was created largely thanks to Nkrumah and Julius Nyerere, the president of Tanganyika and then-Tanzania. They believed “a united socialist Africa (was) necessary condition for the realization of the African personality.” The market-friendly policies championed by the AU today couldn’t be further opposed to Nkrumah and Nyerere’s socialist intentions for the original OAU.

The AfCFTA, a project of the AU, was introduced in March 2018 by Paul Kagame, the President of Rwanda and (at that time) leader of the AU. Ideologically, Kagame describes himself as an avid free-trader and a disciple of Lee Kuan Yew, the first prime minister of the free-trading nation of Singapore. Kagame’s capitalistic views are not fringe beliefs and, following the trade area’s introduction, forty-four of the fifty-five of the AU nations instantly signed the agreement to show their support. Today, just three countries have yet to sign.

Africa’s turn toward economic liberalization spells good news for the continent because, as Professor Ayittey notes, Africa’s historic love affair with socialism led to nothing but “economic ruin, dictatorship and oppression.”

In solid contrast to socialism’s economic ruin and oppression, the AfCFTA’s implementation will likely push intra-regional trade to skyrocket by 52 percent in just a few years. This figure could then double again once the final 10 percent of tariffs on “sensitive goods” are phased out. This boost in trade will add billions to the continent’s economy.

Another benefit of the AfCFTA lies in uniting many African states under a single market,  making it easier for Africa to trade with the rest of the world. If all AU member-states were to ratify the AfCFTA, just one set of trade deals is needed to be negotiated with each external trade partner—rather than fifty-five individual trade agreements for each African nation.

That’s not to say that Africa’s broad turn toward economic liberalization will solve all of the continent’s problems, or that Africa has been completely taken over by free-trading tendencies. So far, only twenty-two AU member-states have ratified the free-trade area, and although more are expected to join in the coming months, there is still a long way to go until the entire continent joins the trade area. Similarly, Nigeria, which has the continent’s largest economy, remains vehemently opposed to the trade deal.

Yet although socialism does continue to show its ugly face across Africa, we can all celebrate the fact that the socialist ideology that plagued the continent for decades is no longer mainstream. The AfCFTA truly has the potential to grow Africa’s economy and lift many out of poverty. When the deal is implemented later this year, it should be seen as a sign that Africa is turning it back on its socialist past and is embracing a new, prosperous, free-trading future. Africans should hope that this trend will continue.

Alexander C. R. Hammond is a Senior Fellow at African Liberty. He is also a researcher at a Washington D.C. think tank and a Young Voices contributor. Hammond writes about economic freedom, African development and global well-being. To keep up with his latest work follow him on Twitter @AlexanderHammo.