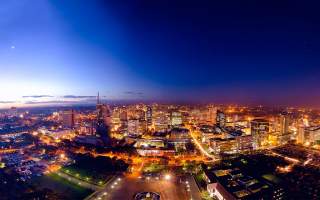 The morning after the American presidential elections, I flew home to Washington, DC from Abuja, the capital of Nigeria, Africa’s most populous country. I didn’t know the results of the election when I arrived at the airport, but I was about to find out in an unusual way. I presented my passport to the customs agent, a young man in his twenties who was preoccupied with his new Samsung Galaxy Note 7 cell phone, which still had the plastic wrapping on its screen. A large grin slowly took shape as he scanned my passport and cross-checked his phone. “Mr. Pence, how was your night? You are American? Congratulations on your election. Your people have won.” I interpreted his remark as a general statement about how the elections had been conducted, without unrest or error. But in truth, he was saying something else. He had noticed my last name in the live stream on his phone and assumed I was related to Vice President Mike Pence. What he meant by “people” was not general. It was specific. My people had won.

Africa is a land of contrasts today. A young customs agent can know immediately about the results of an election five thousand miles away because he has a phone that puts more information in his hand than was available to an American president twenty years ago. Yet, and understandably, the continent remains thoroughly of its customs and traditions. It is a continent modernizing faster than any in history, but that modernization bumps into traditions more often than its people would like to admit. This conflict—between modernization and tradition—is playing out now more than it ever has, and its consequences are profound.

Among the more conspicuous effects of this collision is the coexistence of economic growth and democratic consolidation in part of the continent with violence and democratic disintegration elsewhere. That these opposites exist in such close proximity to one another is why it no longer appears odd that extreme expressions of xenophobia in South Africa, the “rainbow nation,” persist. It no longer seems odd that Nigeria, a country in the midst of an insurgency, can conduct a peaceful election, or that Kenya, a darling of global tourism, is the stage for alarming terrorism. A similar level of dissonance is emerging in Africa’s economic outlook. Even as the Economist Intelligence Unit declared that Africa’s economies are the “fastest growing in the world,” the World Bank estimated the continent’s growth would be “slower than the global average.” And while Moody’s Investors Service predicts that economic growth in sub-Saharan Africa will decline again this year, it maintains that the region will be the second-fastest growing in the world in the years ahead.

It’s hard to make sense of all this. It’s clear that Africa is transitioning from one socioeconomic reality to another, but is Africa rising or unraveling? In a sense, it is both. The growth in opportunities brought on by technological transformation has employed hundreds of thousands in jobs that didn’t exist five years ago. There are now more than 170,000 mobile-money agents in Kenya. Similarly, the productivity gains of urbanization have dramatically reduced transaction costs for all manner of economic and political activity. But the forces driving Africa’s growth also imperil it. Ten years of rapid economic growth may have closed the gap across different countries, but within them it has grown. Even as urbanization and technology ease the role of the government in some ways, it exacerbates in other ways. Their benefits naturally give rise to growth in expectations of what an educated, connected electorate expects of the state.

Africa’s growth is thus not linear, or always positive. It generates countercurrents that spawn backlashes, resulting in systemic challenges, such as Boko Haram, and episodic catastrophes, such as the attack on Kenya’s Garissa University. Of particular significance is the lag in the development of participatory institutions behind economic growth. How far—and how well—Africa rises will be defined by these institutions’ capacity to manage the “countercurrents” that emerge from four areas: rapid urbanization, demographic change, technological shifts and political reform.

Urbanization and the Politics of Proximity

Africa is urbanizing at an alarmingly fast rate, nearly twice the rate of China. According to the African Development Bank, over five hundred million people will move into Africa’s cities in the next thirty-five years. Nigeria’s commercial capital, Lagos, is urbanizing at a rate quadruple the global average. Urbanization has had a tremendous effect on increased productivity. It has reduced transaction costs and increased access to more educational, medical and sanitation facilities. But if the rate of investment in urban infrastructure lags behind urban population growth, the benefits can be reversed swiftly. A 2015 Brookings Institute report, Financing African Infrastructure, reveals that no one really knows how much investment has gone into urban infrastructure, but there are multiple reasons to believe it is nowhere near enough. Much of the investment in infrastructure has been at a national level, such as direct transfers from development financing institutions (DFIs) to national governments. Because many African governments are highly centralized, urban regions often rely heavily on budget transfers, which can make them victims of political processes. The upshot is that while municipalities retain operational control and authority, they often lack the fiscal resources necessary to bring about the change and investment needed. An additional obstacle is that national politics and municipal politics often disagree, and because both have substantial constituents and power, coordination and cooperation are rare. Some governments have sought to rebalance this by rewriting their constitutions and devolving authority. But devolution is a messy, uneven process that is itself the source of instability and policy uncertainty.

The paradox is that the reforms and policies responsible for “modernizing” Africa’s cities have, in cases, dramatically undermined stability. DFIs cannot engage beyond the national authorities (for example, the Millennium Challenge Corporation cannot sign a compact with a subnational actor), which constricts their ability to respond to subnational challenges. Additionally, the remedies designed to deal with subnational issues are themselves triggers for continuing instability. In the middle are enormous swaths of idle humanity perpetually stuck in impermanent settlements, seduced by the allure of the city, but not contributors to—nor beneficiaries of—the growth they witness emerging all around them.

In thirty-five years, Africa will have the largest labor force, larger than those of India and China. It will be the workshop of the world. Already, the benefits are accruing: vast investment in incipient manufacturing in Ethiopia is flowing in from China. The same is emerging in Rwanda and Kenya. Africa won’t have the problems Japan and Europe have, with a limited working-class population supporting a rapidly retiring workforce. In fact, Africa’s pension funds are growing at extraordinary rates, and the proceeds are being used to fund national development programs. As the population urbanizes and the labor force continues to formalize, pensions will grow even faster. This bodes well for the population. But other institutions need to step in to make sure that the labor force can achieve its full potential. Of primary importance are educational institutions, particularly at pre-university levels. Urbanization may make it easier to create strong schools. For example, it is easier to find teachers willing to work in cities than it is in rural areas. Also, the higher concentration of students and resources makes it easier to use scale as an advantage. Education is still lacking, though. In 2012, projections by the Brookings Institution suggested that there was a rising number of primary-school age children across the continent who were out of school. Africa may have the largest labor force in the near future, but if it isn’t educated as well as it can and should be, then advancements will be limited.

Africa is full of new technologies, particularly those that make social interaction and transactions easier. They have enabled people in rural areas to access information almost instantly, and allowed for millions to begin banking and for millions more to follow current events as they happen. The use of technology for interaction and communication is growing quickly. Africa has effectively leapfrogged the need for landed communications infrastructure and its use of mobile networks is increasing by leaps and bounds. By 2014, one hundred million people were using Facebook in Africa; there will be two hundred million people using the social-media network in 2020. Twitter has a similar story. In 2015, there were 1.6 billion geolocated tweets coming from the continent, which is a 34 percent increase from 2012. Although almost all of those tweets came from five countries—nearly half came from Egypt—affordable smartphones are becoming more and more available in many African nations. That gives Twitter continued potential to grow continent-wide. WhatsApp, the person-to-person messaging service, has also exploded. Someone in South Sudan can now have a WhatsApp meeting with someone in Kenya or in the United States as easily as if that person were at an adjacent office desk, which was unthinkable a few short years ago. Additionally, the continent’s young workforce in urban areas has enormous potential to drive new information technology development locally. New companies like Andela have recognized the opportunity to nurture the vast reservoir of technical knowledge on the continent and connect it with global companies.