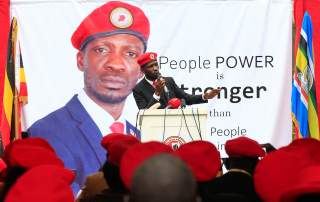 How are security and political dynamics going overall in Africa? At the Brookings Institution we try to ask, and answer, this big question about this time each year, even though on a continent with fifty-four countries and more than one billion people, it is an impossibly big query to address in any simple way.

At first glance, there is no obvious big story line to summarize the last year. In terms of a few broad indicators, like trends in democracy, child survival, and economic growth, things are OK—at least by comparison with the early post-colonial decades of the twentieth century—but it is hard to see major change from a year or two or three ago. For example, according to Freedom House, sub-Saharan Africa in particular has about ten “free” countries (most of them small), about twenty “partly free,” and about twenty more “not free” nations. That has been the case for a decade or more, if you discount countries like Egypt, Libya, Tunisia and Algeria.

Economic growth across the continent has slowed a bit in recent years, which is regrettable because the modest growth rates are not really adequate to make fast progress in light of fast-increasing populations. Even where it is occurring, it remains troubled by certain characteristics such as opaque Chinese investments and inadequate American involvement.

In terms of international peacekeeping, Africa remains home to most of the world’s UN-deployed peacekeepers and six of its big missions, which are in the Democratic Republic of the Congo, Mali, the Central African Republic, and Sudan/South Sudan (there are a total of three missions in the Sudans). A large African Union mission continues in Somalia, as well. All of these places remain troubled, but to varying degrees peacekeepers are at least helping keep a lid on political violence.

Criminal violence sadly remains a general blight on the continent; Africa, like Latin America, generally suffers from high crime rates by global standards. Progress on this front will likely require gradual strengthening of police and judicial institutions as well as more inclusive economic growth of a type the continent is only beginning to enjoy.

So this year, the big story in Africa is less about growth rates, or big changes for better or worse in conflict dynamics. Probably the biggest story through 2018/2019 is in the realm of politics. And here, the news is not half bad—even if the situations are far from ideal, and even if they also clearly vary from country to country. Fortunately, in terms of the numbers of people affected and the trends that could be created or reinforced, some of the most exciting and hopeful developments are in sub-Saharan Africa's most populous countries.

Consider the “big six,” which is a term for the countries of Nigeria, Ethiopia, the DRC, South Africa, Kenya and Tanzania. Between them they hold more than half a billion people—about half of sub-Saharan Africa's total. To varying degrees, in each place, trends in political violence and/or political reform have arguably been favorable over the past year.

In Nigeria, President Muhammadu Buhari was elected to a second term this year. His rule has not been energetic and turnout in the election was mediocre. But his overall record is considered one of reasonable integrity, and the Boko Haram/northeastern Nigeria conflict he inherited is at least not getting worse. Perhaps it is even quieting. Other internal conflicts simmer, but they at least are not boiling. This is not an outstanding record, but it is passable.

In Ethiopia, the situation is much more encouraging, if also fragile. Prime Minister Abiy Ahmed’s tenure in office includes an impressive record of making peace with Eritrea, freeing political prisoners, and promoting political as well as economic reform. There is still violence, and Abiy’s position is under internal challenge. But with another year of progress—and political survival—now under his belt, the prospects that Ethiopia is turning a corner look better and better.

DRC is more complicated but not all bad by any means. Although Felix Tshisekedi’s election last year remains clouded by the likelihood of irregularity—with former President Joseph Kabila's administration suspected of orchestrating electoral results to ensure that its least-preferred candidate did not win—Tshisekedi has a chance to do what President Joao Lourenco is doing in neighboring Angola and break somewhat from his political predecessors/mentors. There have been some improvements in human rights and treatment of political prisoners, as well as better treatment of political opposition figures—even if conflict and Ebola in the east, to say nothing of endemic corruption, remain huge drags on the nation.

In South Africa, President Cyril Ramaphosa has established himself firmly as the legitimately elected successor to Zuma, whose rule did not end particularly well in terms of reform, anti-corruption efforts, or fostering of economic growth. He is a breath of fresh air and has many opportunities to make progress—even if it is too soon to start to offer a verdict on his time in office.

Finally, there is East Africa. Kenya and Tanzania, the anchors of the subregion, are both doing reasonably well with respected presidents, improved politics including at the local level, and no metastasizing conflicts. Uhuru Kenyatta, reelected in 2017, has led his namesake nation at a time when regional and local politics have also improved in Kenya, and when presidential politics, while complex, have not produced a repeat of the major violence associated with elections a decade ago. President John Magufuli of Tanzania, elected in 2015 and up for reelection next year should he choose to run, is widely viewed as one of Africa's cleaner politicians.

Each of these countries has a much more complex narrative than we hint at here, of course, and each still faces huge challenges. But when combined with promising trends in a few of Africa’s smaller countries as well, like Ghana and Angola, the big six collectively offer some hope and promise in a world that could use a few more encouraging stories.

Michael O’Hanlon is a senior fellow, director of research for Foreign Policy, and co-director of the Africa Security Initiative at the Brookings Institution.