After AUKUS: The Next Steps Toward a Confrontation with China 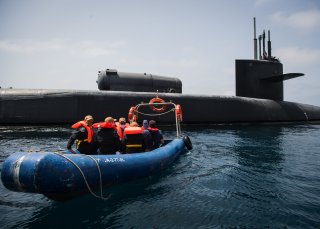 During the United States’ agony in its war in Vietnam, the Argentine-born Cuban revolutionary leader Ernesto “Che” Guevara said that he sought to create “two, three, many Vietnams” for the United States. Che’s spirit should animate the growing cooperation against China.

The Australian-United Kingdom-United States (AUKUS) submarine cooperative agreement announced in September was a good start. The agreement will allow the countries to share, develop, and base in Australia submarines powered by nuclear propulsion (SSNs). Building on this, there should be two or three more AUKUS-type agreements in the confrontation with China. Having allied states work together in the military, economic, diplomatic, and ideological realms will be the key to defeating the Chinese Communist Party (CCP).

The September AUKUS agreement is an important milestone on the path, and cooperation between the countries should broaden and deepen beyond AUKUS and the Quadrilateral Security Dialogue, also known as the Quad, to develop further in the military domain as well as encourage diplomacy and ideology. In the military arena, this cooperation must expand to include collective defense, so that an attack against one member state is considered as an attack against all member states. It must accelerate the process of rearming U.S. allies. The United States may not have twenty years for those nuclear submarines to be commissioned and U.S. allies need a rapid transfer of military technologies and equipment in the interim.

The military cooperation should include new members in these areas. India and Japan are obvious candidates as existing members of the Quad which also includes Australia and the United States. Taiwan could benefit from expanded cooperation in conventionally-powered attack submarines as well as port visits. Canada would profit too, and the Canadian contribution to security in the Indo-Pacific region should be expanded beyond Canada’s focus on the Arctic and sub-Arctic regions to other salient areas, including the East and South China Seas.

Beyond the naval sphere, deepening the necessary path of confrontation should include formalized military cooperation should occur between and among U.S. allies in the area of ballistic and cruise missiles, integrated air defense capabilities, defeating anti-access/aerial-denial system, cyber, and basing and logistical support. Further cooperation could develop in the military use of space, professional military education for officers and non-commissioned officers, and in out-of-area deployments.

In the economic domain, it is critical that a regional trade agreement on a reciprocal preferential basis be negotiated and entered among U.S. allies and partners in the Indo-Pacific region, which does not violate U.S. commitments under the World Trade Organization. In the past, China has weaponized trade to punish countries such as Australia, South Korea, Taiwan, the Philippines and others for their support of the United States by banning imports from them. This regional trading bloc can boost the economic growth of U.S. allies and effectively counter China’s trade war with its geopolitical rivals in the area.

Also, “deepening” might usefully include new diplomatic agreements among the Quad members and other states for cooperation in the domains of law enforcement, including counter-narcotics, riverine and other nautical navigation, civilian space exploration and manned missions to the moon and Mars.

Broadening will also include the realm of ideology. Shared democratic beliefs serve as the basis of a joint ideological campaign directed against the CCP, and the Quad serves as a clear instrument of ideological cooperation which might usefully be expanded to include all like-minded states. But ideological campaigns have to be coordinated and centered around democracy as a superior form of government to the CCP totalitarianism. The liberal international order is better than “the common destiny of mankind” that Beijing seeks to create as justification for its dominance. Respect for human rights is a necessary requirement for states. Forcing Muslims into concentration camps is unacceptable and demonstrates that Beijing’s human-rights record is appalling. The world China seeks to create is not one that is acceptable to the world’s population. But they need not be uniformly the same—tailored messages may be made by individual states. Thus, the messages in support of democracy and human rights that Japan advances may not be the same as India’s message. And a state like New Zealand could make a bigger contribution by joining its democratic allies in condemnation of China’s human-rights abuses, corruption, and predatory economics than it in taking on a military role.

The AUKUS agreement shows that progress in balancing against China may be made in single-issue areas. These measures are necessary and must continue as they show that Australia, the UK, and the United States have made a commitment to the security of the Indo-Pacific region. Simultaneously, bigger steps are required to combat China in a unified and all-encompassing manner—military, economic, diplomatic, and ideological.

The Biden administration will be the manager of these efforts as the United States is the leader of the free world. Thus, it must build upon the momentum created by the AUKUS agreement and sustain that commitment. AUKUS is real and tangible progress but there is a long road ahead. This must be replicated and sustained in all the avenues of confrontation with China. Global democratic cooperation will illuminate the path of freedom for the world rather than Beijing’s road, which seeks to fetter the world.

Lianchao Han and Bradley A. Thayer are co-authors of the forthcoming Understanding the China Threat.