After Defeating ISIS, the Past May Come to Haunt Mosul 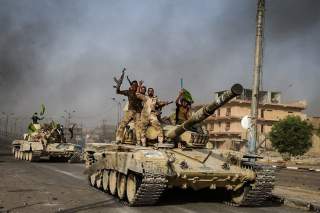 “Get ready to welcome the sons of your armed forces and to cooperate with them, as your brothers on the left side [of the Tigris river] have done, in order to reduce losses and speed up the conclusion,” read thousands of leaflets dropped over western Mosul on February 18. Emblazoned with Iraqi flags, they informed residents that the last phase of the battle for ISIS’s last major stronghold in Iraq was about to begin. “The Iraqi security forces are going to be able to liberate the city. Daesh [ISIS] is going to be crushed in west Mosul. It is going to be finished,” U.S. Col. John Dorrian, the spokesman for the U.S.-led Combined Joint Task Force, Operation Inherent Resolve, told reporters.

Mosul straddles the Tigris river. Before ISIS arrived in 2014, it had around two million residents. Today there are thought to be up to 650,000 in the areas under ISIS control on the western side of the river. It took the Iraqi Army three months to conquer the eastern side of the city, and casualties were heavy. ISIS left behind ruination, libraries burned, the university destroyed, and a city festooned with tunnels and IEDs. Even after fighting ended ISIS launched innovative attacks using drones, and on February 10, a suicide bomber blew up a restaurant in a liberated area.

The advance in western Mosul went smoothly in its opening days. Around thirty square miles were taken leading up to Mosul’s airport. The BBC’s Quentin Sommerville, who was embedded with the federal police, said he saw no civilians in the first two days of battle. Maj. Gen. Rupert Jones, a commander with the coalition, told the BBC that it could take months to take all of western Mosul. Jonathan Spyer, the director of the Rubin Center at IDC Herzliya, who recently returned from eastern Mosul, says that the Iraqi Army will face many difficulties. “The topography of the west of the city differs with narrow streets and alleyways.” Special forces will have to play a major role, as they did in the east, and there may be a “high rate of attrition.” Resistance will be met with artillery and airpower.

Many questions remain about what post-ISIS Mosul will look like. Will it revert to its pre-2014 state, when it was the beating heart of the insurgency, first against U.S. forces after 2003 and then against the government of Nouri al-Maliki from 2009 as U.S. forces left? Or will ISIS be defeated, and its brutal reign, which includes mass executions and the enslavement of thousands of women from the Yazidi minority, become part of history?

Michael Knights of the Washington Institute for Near East Policy argued in a recent article that “Iraq will come apart again and a new Islamic State-type threat will emerge, unless Washington stays engaged.” Washington should support a strong Iraq “led by moderates,” like its current prime minister Haider al-Abadi. “The first thing [the Trump administration] can do is extend the Combined Joint Task Force-Operation Inherent Resolve mission by at least two years.” The United States should also extend the Iraq Train and Equip Fund (ITEF), asserts Knights.

Indication of U.S. policy came after Vice President Mike Pence met Abadi at the Munich Security Conference on February 18. The statement Pence’s office released highlighted the Iranian threat to the region and the importance of the cooperation between the Kurdish peshmerga and the Iraqi Security Forces. The United States was sending a message about the continuing Mosul offensive: that it must not involve the Shia militias of Hashd al-Shaabi (Popular Mobilization Units, or PMU). In November 2016, the PMU was incorporated into the Iraqi armed forces, becoming an official paramilitary force. This provides it the formal legitimacy that it lacked before, cementing in law what had been the custom for two years, as the Shia militias played a key role recapturing Sunni cities from ISIS. Spyer argues that this puts the PMU on track to being an Iraqi version of the Iranian Revolutionary Guards.

Abadi has been able to balance the demands of the controversial Shia militias while coming to an agreement with the Kurdistan Regional Government. Prior to the launching of first phases of the Mosul offensive in October 2016, the Kurds and Iraqi Army came to an agreement about joint operations. I saw firsthand how seamlessly the two forces demarcated sectors, as Kurds took outlying villages and the Iraqi army attacked eastern Mosul. In November 2016, the PMU completed a rapid desert march to the west of Mosul, linking up with Kurdish peshmerga near Tal Afar. Relations there have been relatively amicable since, and it has left ISIS in Mosul surrounded by Kurds to the north, Shia militias to the west and the Iraqi Army to the south and east.

But the tensions over using an overwhelmingly Shia Iraqi Army against Sunni Mosul threatens to stoke the animosity that led many Sunni Arabs to support ISIS in the first place. During operations from October to January, Shia flags, often depicting Imam Hussein, symbolized Shia ascendancy in a sectarian army. Iraq has tried to tone down the flags on the units spearheading operations. The Iraqi Special Operations Forces, often called the “Golden Division,” did most of the major fighting in eastern Mosul, forswearing sectarian flags. In the western Mosul offensive, the federal police of the Interior Ministry have been sent to do the heavy lifting. This could sow discord, since the new Iraqi interior minister, Qasim Mohammad Jalal al-Araji, fought alongside Iran in the 1980s, and is a member of the Shia Badr Organization in the Iraqi parliament.

ISIS will be defeated in Mosul, but the fact the government has saved the battle in Tal Afar for last is of symbolic importance. Before 2014, Tal Afar was a center of the Iraqi insurgency. In August, when ISIS planned its attacks on Yazidis, many victims told me that Tal Afar’s ISIS members were so zealous they began murdering civilians before ISIS had planned. It was a divided town, with Shia and Sunni Turkmen constituting the majority. The PMU now seeks to retake the town, which could bring protests from Turkey who do not want to see the Sunni Turkmen population harmed.

Tal Afar has been the crux of Iraq’s problems before. The newly appointed national security advisor, H. R. McMaster, gained fame for defeating the Iraqi insurgency in Tal Afar in 2005, providing what some thought was a model for the U.S. surge that reduced the insurgency. We now know that McMaster’s fears about the future were correct. “One of the big grievances in Tal Afar was that we have a Shi’a-dominated, Iranian-influenced government in Baghdad,” he told PBS in 2007. In another interview, he said that the United States needed to “develop institutions that can survive and that will operate in a way that is at least congruent with our interests.” The same scenario exists today. From conversations over the last year with numerous Iraqis, it is clear that many fear the end of ISIS in Mosul and Tal Afar could set the stage for a new round of conflict. Various scenarios include the chance of Turkish intervention to protect Turkmens, or to strike at the Kurdistan Workers Party (PKK), and a possible decision by the Kurds to seek independence.

The rise and fall of ISIS has sharpened and focused the divisions in Iraq, instead of healing them. “The reconquest won’t solve the problem that allowed ISIS to come in . . . an increasingly Shia-oriented government and a Sunni province with Sunni identification and is a by-product of the reality,” says Spyer. One thing aiding the government is that after years of conflict, some communities are either exhausted or have been displaced by the fighting. According to the International Organization for Migration, there are over three million internally displaced people in Iraq—about one in ten Iraqis.

Hundreds of thousands of Iraqis are under arms today in a deeply divided society, which leaves U.S. policy in a bind. The United States now has twenty-seven years of experience working with Iraqis and fighting in Iraq, with little success. Only the Kurdish region has a pro-American, functioning and stable government. Brett McGurk, who was appointed by Barack Obama in 2015 as special envoy for the global coalition to defeat ISIS, is still at his post to provide continuity. However Defense Secretary James Mattis and McMaster may have new ideas. Both are hostile to Iran’s deep involvement in Iraq. With U.S. advisors operating closer to the front than at any other time in the anti-ISIS battle, Trump’s team will have to decide what comes next. If they follow McMaster’s former advice about Tal Afar, it means years of a major commitment. If they decide to draw down, that could leave the Kurds exposed and a new instability could emerge.