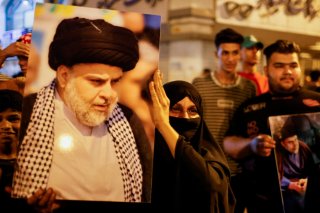 As for the second dimension of the Iranian strategy, i.e., trying to preserve unity among Shiite groups, Tehran’s efforts were well reflected in Qaani’s visit to Baghdad on November 7, which was, at least partly, a quick attempt at crisis management and preventing discord among Iran’s allies. Of note, Qaani arrived in Baghdad on the same day that Prime Minister Mustafa Al-Kadhimi survived an assassination attempt, speculated to be conducted by some pro-Iran militias. As such, Qaani used the opportunity to call for “peace and preservation of national unity” in Iraq, emphasizing that “It is necessary to refrain from any action that endangers the security of Iraq.” This stance can be interpreted as a direct message to Iran’s allied groups that in the current circumstances, resorting to violence would only complicate the situation. Iran’s calculation could be that at a time when the Shiite groups are already in a weak position due to their election performance, opting for armed confrontation with the government would only bring them further delegitimization. It could also play into the hands of Sadr and other figures who want to rein in the Shiite militias. Apart from Qaani’s visit, Iran has reportedly sent other messages to its allies that all disputes must be resolved via political means.

In the same vein, Iran sees the formation of the SCF as a positive development that could potentially lead to a more cohesive Shiite front in Iraq. In fact, for all Shiite factions in Iraq—except the Sadrists—the recent developments seem to have been a wake-up call that internal disagreements may put their political relevance and even their very survival at stake. It was perhaps this sense of urgency that led former Prime Minister Haider al-Abadi and Shiite cleric Ammar al-Hakim, who have both expressed critical views toward pro-Iran militias over the past couple of years, to side with Hadi al-Amiri, the PMF’s leading political figure. Under normal circumstances, Iran had to work hard to bring these figures together in a coalition. Now, common interests have brought them closer together than one could imagine even a few months ago. This experience has come at a great cost, but it may be valuable for Iran if the Iran-backed groups can go through this stage safely and Sadr’s majority government is not formed.

Wild Cards: the Sunnis and the Independents

Although Sadr appears to be the most critical threat to Iran’s interests in Iraq at the moment, Sunni and independent representatives in the next parliament could also become a challenge for Iran. Mohammad al-Halbousi and Khamis al-Khanjar, as the leaders of the two main Sunni blocs in the new parliament, have generally had positive relations with Iran. Halbousi, who has served as Iraq’s parliament speaker since 2018, has also cooperated closely with Amiri, whose Fatah Alliance held the greatest number of seats in the previous parliament. That said, the fact that Halbousi has managed to elevate himself as a popular Sunni figure is potentially worrying for Iran, as it means that he has the potential to bridge the divisions among the Sunnis and turn them into a united front in Iraqi politics. Iran is also concerned about the attempts of its Sunni regional rivals, such as Saudi Arabia and Turkey, to influence both Halbousi and Khanjar. Besides, as in the case of the Kurds, a possible alliance between Halbousi and Sadr could pave the way for Sadr to form his desired majority government and push other Shiite groups to the sidelines.

The recent elections also witnessed a considerable success of independent candidates, who won a total of more than forty seats. This development is also vital for Iran, as it could be seen as a sign that Iraqi society is distancing itself from the old blocs and traditional politics. Accordingly, Iran may sooner or later need to adapt its Iraq policy to the new political and social realities in the country. At the moment, and before the new parliament is actually formed, Iran is expected to follow a cautious approach, meaning that no direct Iranian outreach toward the independents will take place. At the same time, both pro-Iran SCF groups and the Sadrists have already started trying to lure independent figures into their camps. Needless to say, who will win this battle of influence among the independents may have implications for Iran and its Iraqi allies.

All in all, it is safe to argue that Iran is now in a damage control phase in its Iraq strategy, trying to minimize the negative impacts of the failure of its allies in the parliamentary election. The main pillars of Iran’s approach are preventing an armed conflict or widespread violence involving its allies in Iraq, maintaining cohesion among Shiite groups, and preventing the formation of a majority government or any restructuring of the Iraqi state. The extent to which the SCF groups will succeed in continuing to work together as a cohesive bloc on the one hand and the role of Sunnis, Kurds, and independents on the other, can determine Iran’s ultimate success or failure.