After Iran and North Korea; Now Hold Pakistan’s Feet to the Fire 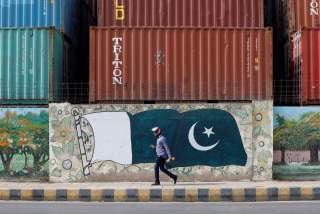 Over the past year, nuclear non-proliferation diplomacy has succumbed to divergent pressures, including:

- American insouciance about nuclear proliferation in South Asia, which many nuclear weapons specialists in the United States, UK and EU see as arguably the most dangerous of all proliferation hotspots

The mutually inconsistent approaches outlined above reflect the erratic and, from a European viewpoint, incoherent and spasmodic interventions by President Donald Trump. These approaches include Trump’s ballyhooed summitry with Kim Jong-un, capturing the limelight (but apparently not much else). The current occupant of the White House has also pulled America out of the Joint Common Plan of Action (JCPOA) with which the International Atomic Energy Agency says Iran is compliant.

The fact that the JCPOA is working takes second or third place to Trump’s wish to punish the Tehran regime for other, nonnuclear misdeeds. The upshot: grandstanding summitry with North Korea, and demolishing an antiproliferation pact of major powers about Iran exposes the incoherence of U.S. nonproliferation policy.

Yet American silence about nuclear weapons competition in South Asia muddies the picture still further. It’s as if the United States has simply walked away from the world’s most dangerous proliferation challenge. India and Pakistan continue developing their respective nuclear weapon arsenals while both nurture festering territorial disputes. And unlike most of North Korea’s bluster, India and Pakistan conduct continuous planning for nuclear war.

So why is Trump deafeningly silent about this arena of proliferation in another corner of Asia? The more irresponsible of the two competitors, Pakistan, continues to receive proliferation support from China, India’s (and America’s) principal strategic adversary. Does this count for nothing? Why not beat a drumbeat about Pakistan’s destabilizing role in the region especially after, in his tweet of 2018, he abruptly announced a cancellation of American aid to Pakistan? No specificity emerged and, as abruptly as Pakistan’s vilification began, the U.S. hectoring of Islamabad ceased.

In South Asia, the two hostile neighbours have gone to war three times since 1965, not counting armed skirmishes and Pakistani terrorist attacks on India’s parliament. In the last twenty years, India and Pakistan have invested ever more in modernizing and diversifying their nuclear forces. Data released by the Bulletin of the Atomic Scientists shows India with an arsenal of 150–200 nuclear warheads, while Pakistan has 130–140 nuclear warheads. Yet Trump takes no discernible steps to moderate this issue. Does this reflect the fact that excoriating Pakistan remains important only to Indian-American political donors and (to Trump) the irrelevant foreign policy establishment he apparently despises?

Apropos North Korea and Iran, Trump has been outspoken in condemnation of the nuclear threat posed by the aforementioned countries. On the other hand, the lack of proliferation-focused criticism of Islamabad reveals a lack of interest in investing new energies in moderating nuclear capabilities. There is no way now to freeze or roll back each country’s ambitions, out in the open since India’s and Pakistan’s 1998 tests—the twentieth anniversary of which has just passed.

As it happens, the Trump administration’s approach comes close to mirroring that of the George W. Bush administration. Given his disdain for America’s previous Republican administration and in view of the Trump’s desire to shake up international relations, South Asia’s omission from the roster of proliferating “bad guys” seems curious.

On closer inspection, Trump’s hands-off approach reflects (1) anxiety about diplomatic overload for a weakened and demoralized State Department, as well as (2) the awkwardness which ostracism of both proliferators would cause to the emerging U.S. quasi-alliance with India, a regional buttress against Chinese assertiveness. Beyond that, even the current president can see that trilateral U.S./India/Pakistan ties must continue to be adroitly handled.

At least, that is, until the United States closes out its ill-starred intervention in Afghanistan, now American’s longest expeditionary war: Islamabad’s control over U.S. materiel supply routes into Afghanistan remains exactly as it was the day after September 11, 2001—the real reason why U.S. ostracism of Pakistan is now muted. In a pan-Asia context, India counts for growing strategic significance to American strategic interests in the Indo-Pacific; in the sub-regional context, however, Pakistan’s importance comes from the need to counter its complicity in cross border terrorism.

The United States seeks a broad-based, strategic relationship with India. Deputy Assistant Secretary of State Alex Wong recently described India as a weighty player in the Indo-Pacific region. Echoing guidance from previous administrations, he called India a partner with which the United States shares common interests and goals in terms of security, diplomacy and trade. The U.S. intent focuses on helping India become one of the most influential countries in the vast Indo-Pacific region, a motivation reinforced by concern about the recent expansion of China’s presence in the Indian Ocean.

The American agenda for Pakistan lacks a similarly clear, positive objective. The U.S.-Pakistan relationship has been deteriorating in recent years. Prominent members of the U.S. congress now make little effort to disguise their disdain for a country whose leadership collaborates with extremist and Islamist groups targeting Afghan government and coalition troops. Yet deteriorating ties with Islamabad simply opens the door wider for Chinese influence in the subcontinent—and what American strategic goal does this result achieve?

The daily logistics relationship with Pakistan resembles a game of bluff, with each side having an interest in keeping the supply routes open. The transit of supply into Afghanistan provides major largesse for Pakistani Army Corps commanders, a reality since U.S. aid began flowing in the 1970s through Pakistan to the anti-Soviet mujahedin. Without Pakistan’s the grudging acquiescence in efforts to buttress the Afghan government, Trump’s 2017 decision to double down in Afghanistan—at variance with his campaign promises the year before—will prove logistically impossible.

This background probably explains why Trump has backed away from naming and blaming Pakistan as a barely disguised dushmen desh (“enemy country” in Urdu, Pakistan’s lingua franca). Specifically, Trump has avoided citing the South Asian proliferation danger, despite such glaring anxieties as Islamabad’s lack of a convincing command and control system to maintain order and discipline in its nuclear force, and (unlike India) its and its Chinese partner’s indifference to strictures against the proliferation of nuclear and missile technology. Trump’s declarations on other issues, as well as those targeting Pakistan, have already diminished Washington’s influence in South Asia.

Francesca Silvestri is a lecturer in International Relations at Nottingham Trent University. Her research focuses on nonproliferation and U.S. foreign policy towards South Asia.

Image: A man walks past a wall of a shipping container's yard painted with a national flag ahead of Pakistan's Independence Day, in Karachi, Pakistan August 6, 2018. REUTERS/Akhtar Soomro