After Iraq: Surviving the Summer of Global Chaos 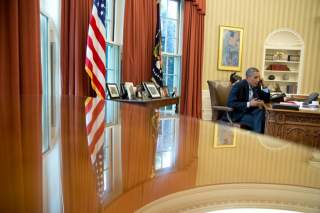 “I don’t think we’re going to solve this problem in weeks,” said President Obama said Saturday.  Summing up his new strategy for Iraq, he added, “This going to be a long-term project.”

Indeed, it won’t be easy to sort out a winning way forward for Iraq. The president's problems with Baghdad are intertwined with a series of setbacks his foreign policy has suffered during this ongoing summer of chaos.

For weeks, the Administration has hopped from crisis to crisis like a globe-trotting traveler skipping across continents. From Syria to Ukraine to Iraq, then Gaza, back to Ukraine, then Afghanistan, back to Gaza, now Iraq, with another round of crisis possible in the Ukraine, the president's problems are piling up.

Without question each of these challenges is unique. There is no grand conspiracy bent on spoiling the First Family’s summer vacation. Besides, it matters little at this point how this mess started. Where the U.S. goes from here is far more important than mulling over where it has been.

Fixing foreign policy has to be the president's top concern.

What is most troubling about each of these troubles is what they have in common.

First, each impacts a vital U.S. interest. The stability of Europe, South Asia and the Middle East are all important to the United States. Each of these conflicts has the potential to lead to spiraling violence or strategic competition that could fuel much bigger dangers. The White House ought to take action in each case to safeguard American interests.

Second, in every one of these crisis the U.S. finds itself chaffing with Iran or Russia. The U.S. has sketchy relations and clashing interests with both. But the U.S. can't effectively engage with the world unless it figures out how to engage with them.

If President Obama really plans to come back from the beach with real long-term plans, he needs to address Iraq, as well as other foreign policy obstacles, in the context of relations with Tehran and Moscow.

The glib answer would be this is an opportunity for the three powers to work together. After all, the U.S., Iran, and Russia have all been targets of Islamist terrorist groups linked to Sunni-extremists. The U.S. and Iran share concerns with the future of Iraq. Nobody is happy with the roiling conflict in Syria. Nobody wants Afghanistan to be "their" problem.

But don't look for even tacit coordination between Washington, Moscow and Tehran.

Obama has already tried that. If the "reset" were worth the misspelled-plastic button Secretary Clinton handed the Russia president, then Washington and Moscow wouldn't be locked in tit-for-tat sanctions, posturing and name-calling over Ukraine.

As for Iran, the White House had hoped that the P5+1 negotiations over the Iranian nuclear program would not only end concerns over an atomic-armed Tehran, but also pave the way for cooperation on any number of issues. The failure to seal the deal in July, however, makes finding an acceptable resolution appear beyond reach. The four-month extension in the talks is unlikely to make much difference.

Both Moscow and Tehran seem content to make their way in the world without Washington's friendship. That's not to say that Washington's troubles mean good news for either nation.  Iran, in particular, is in a bit of pickle.  It finds itself having to step out on multiple fronts—looking to prop up Assad, Hamas, Hezbollah and its Shia allies in Iraq, all at the same time. Further, if the Afghan government falls apart, Iran will have to worry about that flank as well.  Tehran has to bank on the sanctions regime fracturing further to bring in the hard cash it needs to conduct a more activist foreign and defense policy.

Moscow is moody as well. Putin's domestic popularity may be at all-time high, but his economy is not. Relations with the West continue to spiral downward. The friction is only likely to get worse when the European winter kicks in and the finger pointing over fuel shortages starts in earnest.

There will be more cooperation in managing world affairs, but it will be between Moscow and Tehran.

Obama is going to have to go it alone.

The best formula for the U.S. is look after its own interests and forget about Russian and Iranian sensibilities.

In Iraq, the U.S. must meet three vital short-term objectives if it is to sustain President Obama's declaration that the country is stable and sovereign.  It has to keep Kurdistan in the fight. The Kurdish people are key to the future of a prosperous and peaceful Iraqi state. In addition, the U.S. needs a viable government in Baghdad, one not beholden to Tehran. Further, the U.S. must do everything possible to keep tiny Jordan stable. Jordan is like a keystone holding back the spread of Islamist insurgency throughout the region.

Obama can achieve all of these objectives without a whit of help from Russia or Iraq, and he ought to set about these tasks pronto.

Acting decisively now will give him the space he needs to put a real long-term plan together. When he turns to that task, he will find one of the founding principles will have to be: The U.S. will have to act without the friendship of the regimes in Moscow or Tehran.

James Jay Carafano is a vice president of The Heritage Foundation, where he directs their defense and foreign policy studies.