After Modi's Big Win: Can India and Pakistan Enhance Relations? 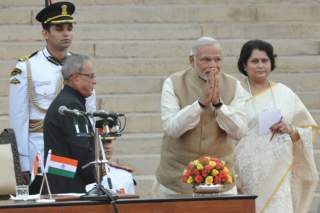 As the new Indian government settles in, questions arise about the future of the Indian-Pakistani relationship—questions prompted mostly by the new Indian prime minister’s history of Hindu nationalism. But a more revealing lens for analyzing this relationship might be to regard it from the perspective of Pakistan. Pakistan’s “dysfunctional civil-military relations” suggest an uncertain political future, leaving India in an essentially reactive role. That dynamic, may have an even more powerful impact than Narendra Modi’s politics.

Modi’s decision to invite his Pakistani counterpart, Nawaz Sharif, to his swearing-in ceremony together with all the other heads of state or government from the South Asian Association for Regional Cooperation, was considered a positive gesture on both sides of the border. The meeting between the two prime ministers was cordial and frank but—to no one’s surprise—not groundbreaking.

While Pakistani leaders are unanimous and sincere in welcoming warmer relations with India, civilians and military officials have opposing long-term objectives. It is doubtful that the Pakistani military supports such a change for any reasons beyond the narrowly tactical, and in fact will fight fiercely against such a change affecting its territorial claims. Sharif is pursuing an opposite strategy—trying to turn a tactical rapprochement into a more permanent arrangement.

India is likely to adopt a “wait and see” attitude. While the election of a new government may have elevated resolve to punish Pakistan in case of a terrorist attack, it has not increased India’s capacity to coerce its neighbor into any specific outcome. New Delhi will have to walk a fine line between ignoring Pakistan, which it can’t control and does not need economically, and keeping the door to better relations open enough to provide a real incentive for Islamabad to adopt meaningful new policies—all without making unilateral concessions to Pakistan.

A year ago, then-candidate Sharif made the normalization of relations with India a central plank of his platform. Hopes were high, therefore, that Pakistan would finally extend India Most-Favored-Nation (MFN) status, removing tariff and other trade barriers. Sharif did not spell out any preconditions. But, twelve months later, the issue is still pending. Pakistan is now stipulating that the MFN status will be attributed to India only if New Delhi reopens the composite dialogue, a stalled executive-level negotiation process.

Awarding the MFN status to India is important in its own right. A substantial part of the business community, in particular small- and medium-sized enterprises, seem to fear being overwhelmed by a massive arrival of cheaper Indian products on the Pakistani market. Nontariff barriers to India’s market have also been invoked as a justification for Pakistan’s hesitations. Yet, the Pakistani government continues to insist on the need to facilitate bilateral trade between the two countries. It blames several Indian lobbies (the automobile, textile and pharmaceutical industries as well as the agricultural lobbies) for obstructing the negotiations and maintains that awarding India MFN status would benefit Pakistan.

However, the MFN issue provides clues to a larger domestic political dynamic in Pakistan. The main political parties support Sharif’s policy. Jihadi organizations, on the contrary, oppose any trade deals with New Delhi as long as Kashmir remains under Indian control. Here, as elsewhere, the jihadis are joined by the military—whose opposition Sharif seems to have underestimated. The nomination of Raheel Sharif as replacement for Ashfaq Parvez Kayani as Chief of Army Staff (COAS) did not usher a more receptive posture in Rawalpindi. It was the military that insisted that the government take the small- and medium-sized enterprises’ objections to heart. It also lent its explicit support to their cause, warning the Sharif brothers “against making rapid concessions, particularly in the run-up to India’s general election.” In February 2014, Shabaz Sharif, the prime minister’s brother, obliquely accused the military of obstructing trade normalization.

Awarding the MFN status to India would thus serve the interests of the civilian government, not to mention the country, whose economy would benefit from free trade with India. But such a move would only partly benefit the military. This relative convergence opens some diplomatic and political space that the government can exploit, providing it can keep its relations with the military under control. Yet, a spectacular advance in trade relations between India and Pakistan is unlikely. In the delay, Pakistan, whose economy is in shambles, has much more to lose than India does. New Delhi can afford patience. Its economic future lies in its integration in the global economy, not in any specific trade relation with its South Asian neighbors.

The situation in Kashmir can be explained from a similar civil-military perspective. The Pakistani army is in no position to challenge India along the Line of Control (LoC) that divides Kashmir, since the bulk of its forces are positioned on its western front. The Pakistan military seems bent on curbing any temptation by the civilian government to rush into a detente. To stave it off, it provokes India, to make rapprochement politically difficult on that side of the border.

Skirmishes in Jammu and Kashmir resumed in August 2013, shortly after the Chief of Army Staff (COAS) told the newly elected prime minister that rapprochement with India was acceptable, but should not proceed too quickly. But the incidents remained limited, so as to avoid any escalation. The appointment of a new COAS, Raheel Sharif, did not alter the military’s position on Kashmir.

The military’s hardening of its position on Kashmir did not prevent Nawaz Sharif from attending Modi’s swearing in, but the predictable absence of tangible results on the Kashmir issue after Sharif’s trip to New Delhi was used by the military and its allies to attack the prime minister on his return to Pakistan.

A serious escalation in the military buildup on either side of the LoC is unlikely. The significance of the Kashmir issue does seem to be changing, however. Kashmir has become as much an indicator of the evolution of civil-military relations in Pakistan as of the Indian-Pakistani relationship. But this evolution does not make a settlement of the issue any less complex and uncertain than it was in the past.

For India, the primary question is far less about Islamabad’s irredentist claims on its territory than about the uncertainty of Pakistan’s political future. For many Indian officials across the political spectrum, the lack of a unified Pakistani center of power with a single policy makes meaningful negotiation and settlements impossible. India is, therefore, condemned to remain essentially reactive until Pakistan can resolve the tensions in its foreign policy. True, New Delhi can favor or close any possibility of dialogue. It can also raise the cost of potential aggression. But it cannot coerce Pakistan into any peace agreement against Islamabad’s will. The decision to normalize the relationship belongs ultimately to Pakistan.

There is real anxiety in New Delhi about the possibility that Pakistan’s security establishment may be tempted to test the new Indian government. In a recent article, journalist Praveen Swami enumerated five possible Indian responses to an attack originating in Pakistan: doing nothing, coercion through Indian-army mobilization along the LoC and the international border, strikes on jihadist training camps, using artillery and infantry along the LoC, and the use of covert means.

None of these options, however, are totally satisfactory. Calculated inaction, for example, characterized New Delhi’s response to the Lashkar-e-Taiba attacks in Mumbai in November 2008. This approach earned India goodwill with major powers and brought pressure to bear against Pakistan. No major Lashkar-e-Taiba attack on Indian territory has taken place since then. But even though a restrained strategy paid dividends in 2008, it is highly dependent on third parties, such as the United States.

Similarly, coercion modeled on India’s 2001-2002 response to the Pakistani-sponsored attack against the Indian parliament, has its drawbacks. India coerced Pakistan into mobilizing its forces along the international border. This response weakened Pakistan’s economy, but also proved very costly for New Delhi. Limited strikes on Pakistani jihadist training camps or shelling targets across the LoC are also possible options, but it is uncertain whether they would produce meaningful results and they carry a high risk of escalation, up to and including the use of nuclear weapons.

The best guarantee of stability lies, therefore, in Pakistan’s exercising restraint due to its domestic-security situation. The intensification of terrorist attacks on Pakistani soil compels Islamabad to reduce its force levels along the LoC and the international border, heightening its disadvantage vis-à-vis the Indian military and forcing Pakistan to exercise greater caution.

The Modi government will have to define a level of engagement with Pakistan that is sufficient to prevent the temptation of sponsoring terrorism, but limited enough to force Islamabad to make real concessions in antiterrorism to secure greater gains. Should New Delhi make significant concessions early in the process, the incentive to renounce terrorism as a way of achieving foreign-policy objectives will be nil or limited. The continuation of the back-channel negotiations that walk this fine line could offer, once more, the most effective instrument in advancing the relationship.