After Ramadi: Does Islamic Extremism Need a State? 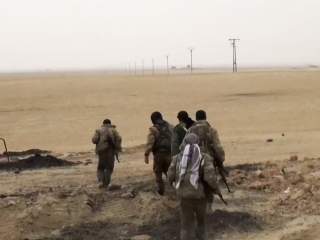 After seven long months, Iraq’s beleaguered army and Shi’a militias, with U.S. and Iranian support, retook Ramadi. While not as strategically important as the Kurdish forces’ advance towards Minbij (as Hassan Hassan cogently argues in his recent Foreign Affairs essay), this recapture is a small moral boost both for the anti-ISIL coalition’s struggling efforts to roll back the group’s surge in Iraq and Syria and for Prime Minister Haider al-Abadi's government.

However, Russia’s air strike, which led to the death of Syrian rebel leader Zahran Alloush in the suburbs of Damascus on Christmas Day, is a setback both on the road to a peace settlement and potentially aids ISIL’s advance to the capital. His assassination also may slow the current Riyadh-led efforts to build a more unified Syrian opposition negotiating position prior to the UN’s planned peace talks at the end of January. While the strike is arguably a significant tactical gain for Syrian President Bashar al-Assad and his allies, Alloush’s assassination may backfire if it derails the negotiating process and necessitates Russia deepening its role further in Syria.

Amidst these recent events, ISIL’s operating landscape faced further setbacks. In Libya, a fragile UN settlement was reached after months of negotiation. Such a settlement may now enable Libya’s competing forces to focus more on rolling back ISIL from its stronghold in Sirte than on fighting amongst themselves. At the same time, Turkey is taking more tangible steps to better police their border. However, the assassination this week in Gaziantep, Turkey, of a prominent Syrian filmmaker who documented ISIL’s violence underscores that President Erdogan has an ISIL problem inside his own borders. Russia and the United States, for different reasons, have also targeted the black market oil trade that has financed ISIL’s hold in Syria and Iraq.

Amidst these setbacks, the terrorist group’s self-proclaimed “Caliph” Abu Bakr al-Baghdadi released an end of the year audio recording confidently extolling ISIL’s progress and calling on Muslims globally to wage jihad. Baghdadi used the recording to open a new front for his group’s activities: Israel. For an organization that avoided the politics of Palestine (a frequent staple for other groups), his move may be a desperate attempt to bring new momentum to his fledgling state as he faces territorial losses.

Despite these territorial losses, ISIL’s worldwide presence is arguably growing.

1) In Bangladesh, ISIL claimed responsibility for a recent attack on mosque.

2) While Egypt’s civil aviation authorities ruled that the crash of the Russian commercial jet was an accident instead of a terrorist attack, ISIL’s presence in the Sinai continues to bedevil Egypt’s security services.

3) In Afghanistan, ISIL’s presence is becoming a deepening reality as the security situation in the state continues to deteriorate.

4) Yemen is a further front for ISIL where it’s actively competing with AQAP for recruits.

5) The Australian government warned recently that ISIL might try to establish “a caliphate” in Indonesia.

6) In the U.S., the number of arrests for those who sympathized, aided the group, or tried to plan attacks on behalf of the group domestically has risen.

ISIL has eclipsed Al Qaeda as the predominant global recruiter and brand for Islamic extremism. With thousands of Europeans fighting for the group and tens of thousands of supporters online, the brand has arguably overshadowed its actual product: their present diminishing territorial “state.” As Will McCants, Michael Weiss, Hassan Hassan, JM Berger and others argue, the group’s distinctive narrative and ideology has seductive resonance. The November Paris attacks underscore how the group has both indirectly inspired and directly supported its followers to wage jihad even in places far beyond their current territorial “state” holdings.

The brand represents a broader long-term challenge than the actual “state.” President Obama accurately points out that ISIL is losing territorial ground, but he has underestimated the ideological resiliency of the organization. As long as the narrative of a “caliphate” can exist and its apocalyptic ideology attracts followers, ISIL will continue to be a potent global threat. Long after ISIL loses its territorial hold in Iraq and someday in Syria, its finances are diminished and its first and second generation of leaders are captured and killed, this group will attract new followers and likely gain footholds. The group will continue to be a menace to governments in the Muslim world and globally.

In the coming decades, a new generation of militants will either carry the banner of ISIL or the banner of a new organization. Similar to ISIL eclipsing Al Qaeda as the new face of Islamic extremism (Osama bin Laden never could have dreamed of declaring himself Caliph), a new organization may seek in the future to go farther than Abu Bakr al-Baghdadi ever did. As Jason Burke notes in his excellent new book, The New Threat from Islamic Militancy, it’s not so much ISIL as a singular threat, but a growing global subculture of Islamic extremism (layered in with anti-Semitism, anti-Western and homophobia) that attracts those to reject their current societies and culture and rebel. The United States and its allies face then a “diverse, dynamic, fragmentary, and chaotic” Islamic militancy which isn’t merely contained to the battlefields of Iraq and Syria. It is more “jihadi cool” than ISIL alone which is inspiring some youth to commit domestic terrorist attacks or fight in Syria and Iraq.

While the focus of current anti-ISIL efforts is on regaining the territory the group has amassed since the summer of 2014, the longer-term challenge is countering the broader Islamic extremist ideological narratives that gain traction and currency in the West and in the Muslim world. President Obama has delicately avoided calling this challenge “Islamic extremism” believing that such labeling will only feed into these groups’ narratives or incite anti-Muslim sentiments domestically. The president is right to not validate these groups’ narratives but he has underestimated the challenge that this sub-culture militant extremism poses to the national security of the United States and its allies. Such extremism is a direct challenge to Western civilization, culture, and values. It will not go away because U.S. Special Forces killed Osama Bin Laden or ISIL’s territory has somewhat shrunk in Iraq.

The “war on terror” is not over as the president naively proclaimed in the early days of his presidency. ISIL’s emergence is a reminder that without addressing the roots of what feed such groups new militants will emerge either at home or abroad. Certainly, steps could have been taken to prevent ISIL’s rise, but President Obama, breaking with his predecessor, lost perspective of the broader challenge global extremism poses. The president preferred instead to confront this challenge narrowly as he looked beyond the Middle East and Afghanistan, the legacy of his predecessor, to shape a new legacy.

Rolling back ISIL in Syria and Iraq, then, is a needed short-term step to remove the group’s potency as a source of recruitment for global extremism. But the broader challenge will be addressing the roots that feed the rejection of societies by individuals both at home and abroad.