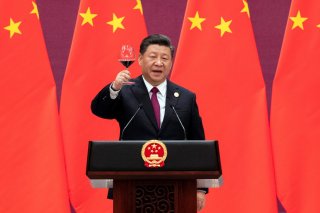 Xi’s Script in the Indo-Pacific

In light of such conclusions, it can be expected that policies such as “wolf warrior” diplomacy, “grey-zone” strategy, and hybrid warfare are largely set to continue in a similarly belligerent fashion in the coming time, particularly when it comes to China’s uncompromisable core strategic interests. Xi prides himself on being a “strongman” leader; he has successfully framed his aggressive antics and revisionism as Beijing’s assertion of its rights and the U.S.-led West’s comeuppance amongst the Chinese people.

Thus, much as the world slowly but surely realized that Chinese economic growth and a policy of general appeasement are not likely to turn China towards democracy, leaders across the Indo-Pacific have begun to identify Chinese unilateralism as denoting the end of its peaceful rise. The two China seas, the boundary dispute with India, the technological rivalry with the United States, the Tibet question, and the quest for “reunification” with Taiwan and Hong Kong are the key areas of focus for Xi and the CCP. Expecting a softer stand on any of these points of flux by Beijing would at present be an unrealistic expectation.

After the Sixth Plenum’s successes, Xi can now bring in more loyalists to core CCP positions, therein ensuring that a more subservient Politburo is formed in 2022. However, at the same time, China will also work via regional and global diplomacy and image modification to ensure stable relations with major powers, so as to ensure unhindered economic and strategic growth. Announced first in June 2021, the CCP has sought to present the image of a “credible, lovable and respectable China” to the world. In an effort to gain a level of influence that matches its national strength and global stature, Xi purports to mold China’s image as a powerful and confident state and at the same time, convey modesty and humility, so as to diplomatically push China’s narrative on contentious issues in its wrangling with the Western democracies.

In essence, the Sixth Plenum celebrated Xi’s success in achieving new heights in Beijing’s international goals and ambitions. Highlighting how China had capitalized on its advantages and turned crises into opportunities through persistent struggle, the plenum advocated for exporting the “China model” (or Beijing consensus) of governance across its borders. Asian powers and Indo-Pacific nations must remain on guard amidst such developments. The plenum also called upon the “entire Party, the military, and all Chinese people to rally more closely around the Central Committee with Comrade Xi Jinping at its core.” Such an outlook denotes a number of key takeaways: Xi’s return to a third term is all but somewhat appears only guaranteed; the CCP has become, for all intents and purposes, Xi’s party; Xi’s personal ideologies enshrined in the “Xi Jinping Thought” are set to mark the trajectory of China’s domestic and international politics; and Xi’s CCP has no plans of slowing down in China’s quest for “great power” identity.

Dr. Jagannath Panda is a Research Fellow and Centre Coordinator for East Asia at the Manohar Parrikar Institute for Defence Studies and Analyses, New Delhi. He is the Series Editor for “Routledge Studies on Think Asia.” He is the Co-Editor of Chinese Politics and Foreign Policy under Xi Jinping: The Future Political Trajectory (Routledge: 2021).