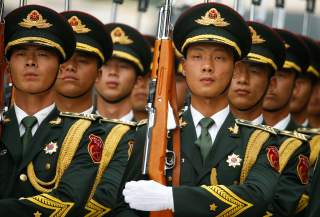 Since coming to power in 2012, China’s President Xi Jinping has taken his country on a foreign policy path in marked contrast to that of his predecessors. Instead of continuing “peaceful development,” China under Xi has grown more assertive in the South and East China Seas, as well as in other areas of territorial dispute. Moving away from Deng Xiaoping’s maxim of “hid[ing] [China’s] strengths and bid[ing] [its] time […] never claim[ing] leadership,” China is now, more than ever, determined to showcase its modernizing military and expand its global influence, particularly through the Belt and Road Initiative.

With what experts know about Chinese policymaking, Xi’s foreign policy was developed and supported by the top echelons of the Communist Party of China. However, starting on October 18, the leadership of the Communist Party will undergo a transition that is expected to not only grant Xi a second term, but lead to more of his allies occupying the top levels of power.

Military Modernization on the Fast Track

President Xi has cultivated a strong relationship with the People’s Liberation Army (PLA), becoming its first commander in chief of the Joint Operations Command Center despite already being the chairman of the Central Military Commission (CMC). Just as with the overall leadership atop the Communist Party, the CMC’s makeup will change in Xi’s favor during the 19th Party Congress.

Both General Li and Admiral Miao rose through the ranks of the PLA largely on their own merits, giving them genuine credibility as highly competent military operators, with Li having combat experience during the Sino-Vietnam War and Miao having trained as a combat pilot. Xi has long sought to further professionalize the military by elevating the most competent and proven military leaders, dedicated to transforming the PLA into a modern, agile military that can fight and win in multiple domains. China, Xi knows, must have a military seen as the ‘real deal’ to challenge and deter the United States in the Asia-Pacific region.

A more powerful and effective military is certainly part of restoring China to its former glory, but it remains a means to achieving one of Xi’s core goals: the Chinese Dream of the Great Rejuvenation of the Chinese Nation. Beyond the economic component, however, it is an open question and source of much debate as to what the “great rejuvenation” will ultimately entail. Nevertheless, given China’s foreign policy trajectory since Xi came to power, it most likely includes achieving China’s core interests, especially regarding the Taiwan question and the East and South China Seas.

Five of the seven Politburo Standing Committee (PSC) members have reached the unofficial retirement age of 68, allowing Xi to possibly fill those slots with allies, like Wang Huning and Zhao Leji, who will more likely support a more aggressive and nationalistic foreign policy. In the past few months, Xi has been careful not to antagonize the international community. With the new U.S. administration moving to untether the United States from international commitments, Xi has tried to capitalize on opportunities to fill the void, from climate change to trade. This can be viewed as not a new and lasting commitment to international leadership, but rather as a tactical maneuver to shield Xi and China from criticism, or worse, should China act more aggressively in trying for lasting gains in support of the aforementioned interests.

Should Wang Qishan, an ally of Xi and a member of the PSC who has reached retirement age, stay on to lead China’s anticorruption efforts as head of the Central Commission for Discipline Inspection as some have predicted, Xi will retain his most loyal and able enforcer to crack down on both corrupt officials and those who oppose him and his policies.

Ways China Could Be More Assertive

Since Xi will likely cement his control over the Communist Party, China will be expected to steadily and incrementally increase its presence in the South and East China Seas, although unless China actually feels provoked it is unlikely Xi will order any action seen as excessively aggressive. Xi and China know how to play the long game, and he has been especially attuned to the nuance necessary to gradually adjust the ‘new normal’ (call it the ‘boiling frog’ approach) while managing relations with each contesting nation in a multi-faceted way. Recently, Beijing has been trying to repair its relationships with disputant countries, like Vietnam, and those who have displayed discomfort about China’s presence in the South China Sea, such as Singapore. However, there is no getting around the fact that Xi and the Party have based their legitimacy, in part, on not just economic growth, but on nationalism and Chinese reunification. With Xi and his allies more firmly in control of the organs of Chinese power, China may risk slightly more aggressive actions by declaring an air-defense identification zone (ADIZ) above the South China Sea or resuming island construction to further bolster its territorial claims.

More naval patrols and air sorties around the Diaoyu/Senkaku Islands can also be expected, not only to support the legitimacy of Xi and the Party, but also due to Japan’s efforts to expand its military. Besides China, North Korea provides Japan with a rationale to enhance the status of its defense forces. Xi will feel pressure to make gains in the Diaoyu/Senkaku Islands dispute before Japan develops a capacity to more easily challenge China. This will be much easier after he has installed more of his friends into power.

Regarding North Korea, a more powerful Xi may actually prove beneficial to the West. North Korea’s Kim Jong-un and Xi do not have a good relationship and Beijing has gradually placed more pressure on Pyongyang. To achieve more important policy objectives and prevent a loss of Chinese prestige, Xi may look for a deal to achieve an outcome that is both beneficial to China and the West.

In another area of tension between China and the United States, the current downturn in Cross-Strait relations will likely continue. Beijing will feel emboldened to continue poaching Taipei’s remaining diplomatic partners and blocking Taiwan from participating in international organizations. If Taiwan’s current president, Tsai Ing-wen of the pro-independence Democratic Progressive Party, fails to win reelection in 2020, Xi and the Party may relax pressure on Taiwan and move back to a more conciliatory, economic-centered relationship that Beijing championed during Kuomintang rule from 2008–16. Regardless, China’s ultimate goal of reunification will not change and the leadership will be compelled to push for unification by 2049, when the Chinese nation is supposed to be rejuvenated.

China will continue to expand its influence through the Belt and Road Initiative (BRI), especially since it is one of Xi’s primary policies and signature international initiatives. Beijing will maintain BRI as a way to export excess capacity and successfully compete, through underbidding and bad loan making, with Russia, Japan and others for influence in Southeast and Central Asia. Although BRI helps China with its excess capacity issues, its importance may decline if the Party is unable to reform the Chinese economy and successfully manage growing corporate debt.

Ultimately, the “Great Rejuvenation of the Chinese Nation” might not just mean only be a militarily, economically, and diplomatically dominant China in the Asia-Pacific, but in the world. With his allies in place at the highest echelons of the military and the Party, Xi Jinping will have an improved capability to pursue his policies of strengthening the PLA, working towards achieving China’s core interest of reunification, and expanding Chinese influence throughout Eurasia, thereby helping ensure that he and the Communist Party remain in power. In short, China’s foreign policy post-Party Congress will probably exacerbate tensions with the United States in a number of areas. Despite these tensions, Xi will push for what he can get, riding on China’s ever growing confidence. His legitimacy and authority, not to mention legacy, will depend on it.

Bill Bray is a managing director at Ankura Consulting working with the firm’s Geopolitical Risk Advisory group in Washington, DC. He is a recently retired Naval Intelligence officer.

Image: Chinese honour guards prepare for a welcoming ceremony for Brazil's President Michel Temer (not pictured) at the Great Hall of the People in Beijing, China, September 1, 2017. REUTERS/Thomas Peter