After the Manchester Terror Attack: What Comes Next? 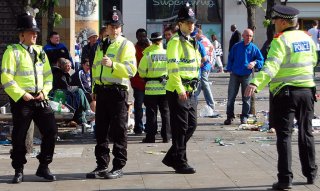 President Donald Trump has emerged as an unlikely source of comfort for many Brits today. America’s commander in chief is widely regarded here, as everywhere else, as a dangerous fool—yet his response to last night’s terrorist attack at a pop concert in Manchester, in the north of England, has been well received by shocked and saddened Britons. “We stand in absolute solidarity with the people of the United Kingdom,” he said. “So many young beautiful, innocent people living and enjoying their lives murdered by evil losers in life. I won’t call them monsters because they would like that term. They would think that’s a great name. I will call them, from now on, losers, because that’s what they are. They are losers. And we will have more of them. But they are losers, just remember that.”

The strange vapidity of that response struck a chord with the English because we have almost nothing left to say about terrorism: impotently calling terrorists “losers” or “cowards” is just about the only thing that gives us satisfaction. The other we do is channel our inner Churchills and vow “they will never win.” Theresa May did that, rather well, outside 10 Downing Street earlier this morning:

At terrible moments like these it is customary for leaders, politicians and others to condemn the perpetrators and declare that the terrorists will not win. But the fact that we have been here before, and the fact that we need to say this again, does not make it any less true. . . . Today, let us remember those who died and let us celebrate those who helped, safe in the knowledge that the terrorists will never win—and our values, our country and our way of life will always prevail.

May is an old hand at terror response, having been home secretary for six years before she became prime minister. She knows that people want reassuring platitudes when they are scared. She has suspended her general-election campaign—which is right and proper, although nobody in Westminster will fail to notice that the timing is politically useful for her. May is widely expected to win a landslide when Britain goes to the ballot on June 8, but her campaign has stuttered badly in recent days. Her party manifesto has been much derided, and only yesterday she performed a humiliating volte-face over her controversial social-care proposals (a.k.a. the “dementia tax”). Now, hostilities will be reignited against her Labour opponent Jeremy Corbyn, who is about as “soft on terror” as any major political figure in Western politics today. Corbyn makes Bernie Sanders look like John Bolton when it comes to handling security issues.

Once the initial flushes of shock, indignation and defiance have passed, and people have stopped sharing Donald Trump’s speech on social media, we Britons will have to face up to the concern that our terrorist problem may be a lot worse than we like to think. In recent years, the British have looked at the many terror incidents that have taken place in France, Belgium and Germany and thanked our lucky stars that our brilliant security services know how to keep us safe. Our attitude has bordered on hubris. Unlike the other Europeans, Brits are more than willing to have our privacy invaded if it means M15 (our domestic security agency) protects us. We still said so a few weeks ago in March, when a maniac in a car ran over and killed people on Westminster Bridge, then charged at Parliament before being shot. This sort of attack proved that the security services were winning, said the pundits. We can’t do much about lone-wolf attackers, but the more concerted, bomb or heavy-armored attacks require meticulous planning, and we haven’t had one of those atrocities since the suicide bombings on London transport in 2005.

It’s still possible that last night’s attack was the work of a lone individual with no links to known terror groups—nobody is crying Islamism quite yet—but all the experts suggest that an individual would have struggled to make the explosive and carry out the bombing without training or support. This raises the question of whether the British security state really is viable.