After the Olympics, Where Do We Stand on North Korea? 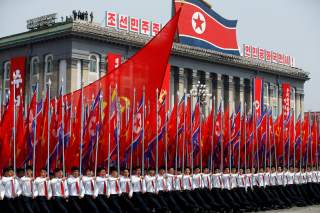 The Olympics in Pyeongchang, South Korea have concluded, and the hype was tremendous. The North Koreans came, and Korea fielded a joint team. If that did not generate enough buzz about the Koreas overcoming their differences, the appearance of high-level North Koreans in the South in the context of the games generated a two-week cottage industry of speculation on inter-Korean peace. In a decade working on this issue, I cannot recall a similar period of near-hysteria on inter-Korean reconciliation. So over-the-top was the coverage, that the South Koreans political right hit the streets during the games to push back.

Now that it is all over, it is worth stepping back to ask where this is going and if it can really generate a breakthrough. We should be skeptical:

First, the differences between North and South Korea are political and deep. These are not the sort of cleavages that inter-cultural exchange—like the Olympics or shared music concerts—can really overcome. After unification, cultural events will indeed be valuable. Sewing the two Koreas together socially and culturally after unification will be a tall order, and shared sporting and musical events emphasizing common national themes will help. But let’s not put the cart before the horse. The immediate problem is political reconciliation in an environment of very wide ideological—Stalinist vs. democratic—difference. It is hard to see how this gulf can be overcome without massive political shifts on one side or the other, and nothing in a sporting event like Olympics obviously charts a path toward that political change.

Second, coexistence is hard. Constitutionally, neither Korea accepts the legitimacy of the other. Both claim to rule the entire peninsula. It is true that neither is really preparing for conflict; both broadly accept the status quo. But there is only so far the two sides’ rapprochement can go before they collide with the deep political and ideological differences which have kept them apart for so long. Indeed, a genuine narrowing of those differences would represent an existential threat to North Korea. Were the North to partially de-Stalinize in order to forge better relations with the South and unlock foreign aid and investment, the obvious question would arise, why not keep liberalizing to achieve unification? In an era of détente, why does North Korea need to exist at all? If North Korea is not the Democratic People’s Republic of Korea, if it is just northern Korea—poor backward, unhappy—then it has no reason to persist. It should just join the South and take the money. (After the Berlin Wall fell and the German Democratic Republic lost its ideological reason to exist, it disappeared in a year.) In short, no amount of reconciliation talks, and certainly not happy atmospherics like the Olympics, can change the fundamental problem that North Korea needs an antagonistic relationship with the South and the United States to explain why it even exists at all, twenty-five years after the Cold War.

Third, sports diplomacy has mixed record at best of opening the door to diplomatic progress. Stephen Walt has a nice run-down of politicized sporting events which suggests they are just as frequently manipulated by dictatorships for prestige purposes—which certainly seems to be the case this year—or they end up reflecting, rather than overcoming, ideological divisions (the U.S.-Soviet hockey match of 1980 comes to mind). It would be fairly astonishing if the reconciliation trigger of two states as deeply divided as North and South Korea was something as facile as a sporting event. Perhaps, and we should always try of course. But we should manage our expectations.

The upside of the Olympics may rather be the invitation of the South Korean president, Moon Jae-In, to meet North Korean leader Kim Jong-un this year. Particularly here in South Korea, there has been a huge amount of media speculation. Moon clearly wants to go; he just needs to sell it to the skeptical Americans. A summit could be the genuine breakthrough everyone is hoping for, but the North Koreans are unlikely to discuss denuclearization, which is almost certainly what the United States has in mind when it says it is open to talks under the ‘right conditions.’ How to proceed then?

Nuclear safety would be good a choice. It is indeed correct that if U.S. or South Korean officials bring up CVID (complete, verifiable, irreversible disarmament) right away, the North Koreans will walk out. But hawks are also correct to worry that the North Koreans will try to hijack any summit for prestige purposes (the South Korean supplicant coming to the North), or deflect any talks toward less important issues like inter-Korean projects or family reunions (an emotionally-laden carrot Pyongyang likes to dangle for concessions). It is important to keep any meetings in the nuclear policy space.

Safety does that. It is related to the Northern nuclear program, but not immediately about the weapons. It responds to a genuine concern. One can only imagine how a country as corrupt, backward, and dysfunctional as North Korea monitors its reactors, handles waste, insures materials are not stolen, and so on. We already know that the main North Korean test site recently suffered a tunnel collapse which killed two hundred people. It is hardly an exaggeration to worry that a Chernobyl-style incident might occur as the Northern programs grows. And given that most of North Korea’s nuclear program is near China (to keep it as far away from U.S. airpower as possible), the Chinese would likely also be interested in this topic. Any nuclear incidents in North Korea would likely affect them immediately.

There is the obvious downside that discussing nuclear protocols and maintenance with Pyongyang seems to implicitly recognize the nuclear program. This will be a bitter pill for the United States to swallow. But CVID is a nearly impossible goal at this point—barring the use of force. At least if we are talking about safety and maintenance, we are still engaging the North in the nuclear space. If this is successful, perhaps we can build toward nuclear constraints and controls.