After Tough New UN Sanctions, Where Is Trump Headed On North Korea? 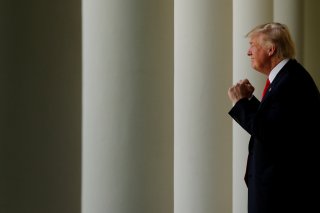 The Trump administration is undertaking its most audacious gamble since coming to office—that despite identifying Russia and China as “rival powers” in the new National Security Strategy, and after calling into question the utility of the United Nations system, the other major players in the international order will work within the UN framework to bring about a resolution of the North Korea crisis on terms favorable to American interests and without imposing major costs on the United States. The new sanctions approved today unanimously by the UN Security Council mark a success for the Trump administration. “Today, we cut deeper,” UN ambassador Nikki Haley said about the sanctions, which were imposed as a response to North Korea’s November 29 missile test. But whether the Trump administration’s approach to Russia and China will continue to work and whether the sanctions themselves will have a real effect remain an open question.

The Trump administration’s approach is a break from the strategy employed by President George H.W. Bush and Secretary of State James Baker during the Persian Gulf crisis of 1990-91. In order to construct the widest coalition committed to the goal of expelling Iraq from Kuwait—and to plug up any and all cracks that Saddam Hussein might try to exploit—the Bush administration engaged in a delicate series of negotiations to bring countries on board. Whether lifting some sanctions on Beijing to guarantee China’s abstention from key UN Security Council votes, to the proffering of Western aid to the Soviet Union to ensure Mikhail Gorbachev’s support, to the complicated set of balances that brought Syrian ground forces into the anti-Saddam coalition while keeping Israel out of the fight, even when Iraq launched SCUD missiles—the U.S. offered compromises and inducements to bring a mix of countries, big and small, into the coalition.

In contrast, the current approach is predicated on the assumption that the North Korean regime of Kim Jong-un poses as much of a threat to core Russian and

Chinese interests as the United States, and that Moscow and Beijing have sufficient incentives to work with the United States to solve this crisis, without requiring additional inducements from the United States. There is, after all, some logic to this assessment. Any war on the Korean peninsula, particularly if nuclear weapons would be involved, would have immediate negative ramifications for Northeast China and the Russian Far East, from the environmental and infrastructure damage to the human costs of uncontrolled migration. Kim’s continued brinkmanship with the United States also complicates the strategic interest of both powers in maintaining a stable buffer state between South Korea and their borders. “Solving” North Korea is just as important for Russia and China as it is for the United States and its allies. Moreover, the U.S. itself need not offer concessions; part of Japan’s ongoing strategy is to hold out the possibility of massive Japanese investment in developing the Russian Far East in return for greater Russian cooperation on items that matter to Japan’s national security—with North Korea being at the top of that list.

The gamble, essentially, is that Moscow and Beijing do not need and should not receive additional incentives for doing something that is already in their national interests. The test, going forward, is whether, on North Korea, China and Russia prove the Trump administration correct—and agree to keep the pressure on Kim Jong-un without any substantive American concessions on other issues.

On the other hand, North Korea does not pose the same type of threat to Moscow and Beijing that it does to Washington. Under the right circumstances, Russia and China can live with a North Korea that has a nuclear capability and the means to deliver it because it remains directed against the U.S. and its allies. Moscow and Beijing are threatened more by the way in which an attempted de-nuclearization of the Korean peninsula, if it went wrong, would be damaging to both countries. Cooperating with the United States to prevent a destructive war is one thing; it does not follow, however, that regime change in Pyongyang is as high a priority for them as it seems to be for us.

Moscow and Beijing also gain from a prolonged crisis; the longer it goes on, the less time, energy and resources the United States has to focus on other matters which may more directly impinge on their interests (say in the South China Sea or in Ukraine). Thus, while both countries may agree to new UN Security Council resolutions (and negotiate down the severity of the proposed sanctions), they also must commit to full enforcement of their terms.

One cannot discount the possibility that Kim Jong-un will do something stupid, along the lines of Muammar Gadhafi alienating both Russia and China in the immediate years before his downfall, so that neither Beijing nor Moscow was

incentivized to leap to his defense in 2011. Approval of the current sanctions may fit both Moscow’s and Beijing’s preferences, to remind Kim Jong-un that he cannot count on blank checks and to demonstrate his vulnerability to sustained pressure from his northern neighbors.

So I predict that we will likely see Russia and China continue their delicate balancing act; applying pressure on North Korea to prevent Kim Jong-un from doing anything too rash, but not eager to solve the crisis too soon. The Russians have never forgotten Joe Biden’s comments in the 2007 Democratic candidate debate—which they see as reflecting a bipartisan consensus in the United States: where, after North Korea and Iran, Russia’s assertiveness was viewed as a principal challenge to American interests around the world. Not surprisingly, neither Moscow nor Beijing may be too enthusiastic about wanting to see permanent solutions to both of those U.S. foreign policy challenges.

Nikolas Gvosdev is the Captain Jerome E. Levy chair of economic geography and national security at the Naval War College and a contributing editor to the National Interest. The views expressed here are his own.