Is an Agreement on Northern Ireland Close at Hand? 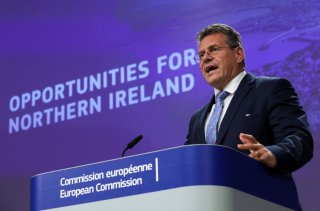 All appears to be on the move in Northern Ireland. Northern Irish politics, never dull, have been complicated by the resignation of Paul Givan of the Democratic Unionist Party (DUP) from his position as the first minister, thereby automatically ejecting Deputy First Minister Michelle O'Neill, of Sinn Féin, from office.

Sinn Féin claims that this development presages a major political crisis and has called for the elections to the Northern Ireland Assembly at Stormont to be brought forward from May.

Meanwhile, DUP agriculture minister Edwin Poots’ order to halt the internal UK border checks between Great Britain and Northern Ireland in protest of the Northern Ireland Protocol was suspended by the High Court.

The DUP, along with many other unionists in Northern Ireland, contend that this internal border breaches the agreement signed in 2020 by all the Northern Ireland parties, the UK, and Irish Governments, and lauded in the United States. A key part of the deal that brought back power-sharing after three years was that Northern Ireland’s place in the UK internal market would be protected. For as long as this agreement is in breach, the DUP has said they will not reinstate their first minister.

Meanwhile, Lord Frost, Britain’s chief negotiator with the European Union, earlier resigned from the government and has been replaced by the foreign secretary, Liz Truss.

As negotiations continue, Prime Minister Boris Johnson was quoted by the DUP leader, Sir Jeffrey Donaldson, as giving the prospect of reaching an agreement with the European Union in the next few weeks at 30 percent. According to Donaldson, Johnson demurred when asked if he would take unilateral action if no movement was made. Though publicly the government in London maintains that “nothing is off the table” in order to protect peace and stability in Northern Ireland.

All of these things suggest chaos and confusion. Outside observers might be tempted to worry that a negotiated agreement to move beyond the protocol is unlikely. But this is not inevitable.

Even with Northern Ireland in a state of political disarray, things proceed.

Reforms brought forward by the Northern Ireland secretary of state Brandon Lewis and recently passed through the UK Parliament will improve long-term political stability by maintaining some continuity of local government in Northern Ireland—whereas the previous power-sharing arrangement would have automatically collapsed, and an early election would have been inevitable.

So, whilst the current political drama is being resolved, the local government in Northern Ireland will not suffer a total break in continuity at this time.

Continuity is preserved in negotiations too, with Truss largely sticking to Frost’s line. Some EU sources are critical of this, claiming it is overly rigid. But it signals continuity and straightforwardness from the UK negotiators, and that the path previously followed in negotiations remains available.

Intensive negotiations with the European Union continue. Truss aspires to reach an agreement on the protocol before the end of February. EU sources have briefed friendly newspapers that they remain skeptical of the British approach, but slowly a consensus is emerging on customs checks and the law. The question on the minds of many is whether comprehensive consensus can be achieved in time for the scheduled May elections.

Maroš Šefčovič, the EU’s Brexit commissioner, now believes that Britain will not trigger Article 16 of the protocol, which unilaterally terminates the arrangement, a sign that agreement on moving past the dictates of the protocol is possible. But he also knows that now more than ever, any deal on the protocol must satisfy all sections of the community in Northern Ireland, as diplomats and politicians in London have been arguing for some time.

This agreement is internationally desirable and sought by many. Secretary Lewis will be in Washington on Wednesday to meet with senior U.S. officials relating to the protocol. Lewis’ shuttle diplomacy has shown his determination to reach an accord.

Those in Washington who have closely followed Northern Ireland’s long road to peace will want to help Lewis’ efforts to find a solution that works for all sections of Northern Ireland society.

Transcending the protocol remains of the utmost importance. Barriers to trade imperil prosperity and day-to-day business. Those temporary delays to full implementation of the protocol, which have been made largely on the fly and as short-term responses to momentary crises. For Northern Ireland to prosper and for political stability to be retained, the protocol must be succeeded by a less suffocating arrangement. But with elections on the horizon, time is running out to safeguard the gains of the Good Friday Agreement. A deal must be reached that works for all communities in Northern Ireland so that power-sharing can be fully restored by the elections this year.

It is in every side’s interest to reach an agreement, and much progress has been made since Britain left the European Union in 2020. A new system is taking shape, slowly being laid down after years of negotiations. Politics remains contentious and heartfelt. Individual crises flare up and must be dealt with. But negations grind doggedly on. A solution is still close at hand.

Dr. Azeem Ibrahim is a Director at the Newlines Institute for Strategy and Policy in Washington, DC, and Research Professor at the Strategic Studies Institute U.S. Army War College.