Air Force Secretary: The Law of War and the Power of Computing 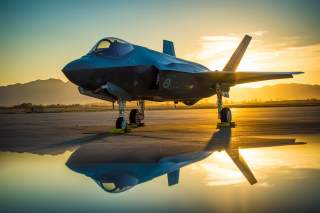 On July 20, 1969, a Purdue graduate from Wapakoneta, Ohio, stepped onto the surface of the moon. I watched it on a black-and-white Zenith television sitting on the floor in the den of our New England farmhouse with my two brothers.

That den was not a big room, and the television was wedged between the fireplace and the family bookshelf. In the next room, under windows that looked out on a hedge of lilacs, was a stereo—a solid wooden cabinet the size of a dining-room sideboard. On its turntable we set a fragile arm with its embedded needle into grooves on black vinyl disks and listened to Broadway show tunes.

On the wall in the kitchen in the next room was an avocado green telephone with a rotary dial and an extra long cord so that my mother could talk on the phone while doing dishes.

In the cellar, my stepfather had a dark room. There we turned the plastic cartridges containing strips of light-sensitive plastic from our Kodak Instamatic cameras into black-and-white images, moving the paper carefully with tongs from one acrid pan of chemicals to another in the dim red light.

It was 1969. And Neil Armstrong took one small step for man; one giant leap for mankind. Just half a lifetime ago. And today, nearly everyone reading this has a computer in their pocket that is a television, and a bookshelf, and a music player, and a telephone, and a camera that is about a million times more powerful than all the computing power NASA had available to put a man on the moon.

Computers have changed nearly every aspect of our lives, and we should be asking ourselves how computers have changed our behaviors and our understanding, as well. Our kitchens, our professions, our cars, our health care, our entertainment, the way we communicate with people we love, the way we get our news or decide where to go out to dinner—is all different, because of the power of computing.

What has mankind done with computing power?

Much of the answer is good almost beyond imagining. We have pulled billions of people from subsistence to surplus through the economic growth enabled by technology. We have advanced health care, and energy use, and education, and food production, and navigation.

At the same time, we are facing disadvantages brought to us by the computer revolution and its resulting intrusions on our privacy, and nearly addictive power over our brains.

In terms of computer-driven change, the military is little different from the rest of modern culture. If anything, the thinking we do about how computers have changed our practices and behaviors becomes even more pressing when we consider questions of war and defense. How do we, and how should we, think about computing and the use of force?

For most purposes, the consideration of just war is divided into two parts: the legitimacy of the resort to force (jus ad bellum), and the rules governing the conduct of hostilities (jus in bello). The growth of the power of computing challenges us in both of these areas in different ways.

With few exceptions, human societies have abhorred war even when they have found it to be sometimes justified. Modern international society accepts the use of force by some agents in world politics in particular circumstances. And a key moment in the development of this just-war analysis comes in the thirteenth century when St. Thomas Aquinas places the legitimate power to go to war (jus ad bellum) in the hands of a sovereign authority, writing, “In order that a war may be just three things are necessary. In the first place, the authority of the prince, by whose order the war is undertaken.” His second and third requirements for a just war, like those of his predecessor St Augustine, were a just cause and right intent.

The medieval thinkers of Thomas’s time were living in a period of tremendous social and political change. By the middle of the thirteenth century the centralized system of feudalism was losing ground and there was a new world of consolidated city-states and growing kingdoms.

A few centuries later, when Hugo Grotius was writing about international law in the sixteenth century, sovereigns had gradually asserted a monopoly on the use of violence both within their borders and against other sovereigns. By the close of the nineteenth century, sovereignty and the exclusive right to wage war were characteristics of a State so strongly established that to suggest otherwise would have seemed preposterous.

Over the same stretch of time, an international consensus gradually developed that the methods and means of warfare (jus in bello) are not unlimited. In the late nineteenth and early twentieth centuries these customary principles began to be codified in conventions and treaties between states intended to mitigate the horrors of war.

Warfare contains an inherent tension. On the one hand, there is the desire to win and the consequent tendency to use all necessary means to secure victory. On the other, there is the creditable human awareness that life has value, and that war is an abnormal state of affairs fought not to destroy a civilization, but to achieve a better peace. G.I.A.D. Draper has called this dichotomy between the purposes of the law of war and the nature of war “probably the most acute point of tension between law and life.”

These rules of war include, for example, that pillage is prohibited. The wounded and sick shall be collected and cared for. Hospitals and hospital ships shall not be attacked. Medics and chaplains shall be respected and protected. Combatants may surrender. In some cases, entire categories of weapons have been proscribed, like the 1925 Geneva Convention prohibiting the use of poison gas in warfare.

I often find a skepticism among those who have never served in the military that these rules of warfare influence the behavior of states and their combatants.

In August 2017, the U.S. Air Force chief of staff and I went to visit airmen in Iraq and Afghanistan. The day we arrived in Iraq, the Iraqi government, with the support of coalition allies had launched the effort to take back the town of Tal Afar from ISIS.

We were standing in the operations center—a room about the size of a large classroom with screens on every wall—watching forty or fifty Airmen do their work. The Iraqi military on the ground had reported they were taking fire from a particular building. A remotely piloted aircraft, a drone, was guided overhead and trained its camera on the building, feeding full-motion video images to the screen on the wall of the operations center.

An Airman in charge of coordinating air support was on the radio with an F-15 fighter jet who reported the weapons he had available and that he could stay overhead five more minutes before he was out of fuel and would have to return to base. Another Airman at a console in the back was scanning maps of prohibited targets, while an Airman next to him calculated the effects of munitions and the probability of collateral damage if particular weapons were used.

And before the Airman in charge gave the instructions to the F-15 pilot to engage, he looked toward a young captain standing calmly in the middle of the buzzing room. She was the JAG officer, the lawyer. Cognizant of the law of war, monitoring the work going on around her, she returned the glance from the air boss, nodded and gave a thumbs up. The air boss gave the order to engage the target and it was destroyed.

There were two reporters with us that day and I was glad they saw, unscripted and in real time that the United States brings its values to the fight. We train our military to comply with the law of war, even under pressure and under fire. It doesn’t mean we are perfect; there is nothing perfect on this side of the New Jerusalem. They also saw the precision that computing has brought to the application of air power.

Just as computing has changed how we pay our electric bill, computing has changed how we fight. In his book, Masters of the Air, Donald Miller tells the story of the bomber boys of the Eighth Air Force in the Second World War. Thousands of bombers based in the United Kingdom attacked aircraft factories and oil production and rail lines in places like Schweinfurt and Ploesti.

The accuracy wasn’t very good and the casualties were staggeringly high. More men died in the Eighth Air Force—twenty-six thousand dead—than in all of the United States Marine Corps during World War II. And the casualties of innocents on the ground were also high. Even by the Vietnam era, when Neil Armstrong walked on the moon, our bombing and navigation and situational awareness were not very good.

Computing changed that. Today the Air Force flies planes like the F-35 fighter. The F-35 is, in essence, a high-performance computer wrapped in a stealthy aircraft. It connects and shares with a network of space, ground, cyber and manned and unmanned airplanes to observe, orient, decide and act faster than adversaries. It sees first. It can shoot first. And it hits what it shoots because of computing power.