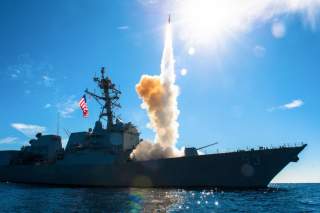 The challenge posed by the growing list of countries embracing Anti-Access/Area-Denial, or A2/AD, is not one that will disappear anytime soon. The U.S. military clearly understands the challenge and is working to develop military assets, operational concepts and ultimately strategies to address the challenge. However, the debate over what was once called the Air-Sea Battle operational concept, commonly referred to as ASB, while certainly passionate and well meaning, left many with more questions than answers.

Last fall, the Pentagon dropped the controversial ASB name and seemed to point towards a fresh start when it comes to confronting A2/AD. However, since the change in name, we have received very little information on what the Joint Concept for Access and Maneuver in the Global Commons, or JAM-GC, will look like.

Below you will find the following responses to questions I recently posed to the Air-Sea Battle Office—oh, and yes, it does still exist.

Kazianis: Many are under the impression that the Air-Sea Battle Office is closed. Could we start out by giving our readers an update of the status of the office? Does it still exist? Has it been folded into the Joint Staff? What is its current role and mission today?

Air-Sea Battle Office: The current multi-service Air-Sea Battle Office is still “open for business,” with all four services contributing to its operation and activities. During this transition period, the ASB “Memorandum of Understanding” (MOU) signed by the Vice Chiefs of the Air Force, Navy, Army and Marine Corps, which defines roles, responsibilities and structure for the office and governance structure remains in effect during the development of the joint JAM-GC concept. Also, the Service sponsors of the concept continue development and implementation under the direction of the J-7. The Air-Sea Battle Office serves to support and oversee the writing and development of the new JAM-GC concept. Following concept approval, the ASB Office will become the JAM-GC Office and a new MOU will be signed by the Services. Though details of the office responsibilities remain to be defined, you can expect them to be similar to that of the present ASB Office.

Kazianis: Many of our readers have asked for an update as to the current status of JAM-GC. Will the Department of Defense release some sort of concept paper detailing JAM-GC in-depth? If so, is there a timeline for the release of such information?

Air-Sea Battle Office: As with any proposed joint concept, JAM-GC has followed the formal joint concept development process as delineated in the Chairman’s “Guidance for Development and Implementation of Joint Concepts.” The process included prospectus development, research and writing, concept evaluation, coordination and approval, and concept implementation. The concept is now in the later stages of the development process and is still on track for approval and concept implementation, although a timeline for that approval has not yet been specified. Part of the approval process will include a determination on the releasability of the JAM-GC concept to the public.

Kazianis: Obviously JAM-GC is a response to the various anti-access/area-denial (commonly known as A2/AD) challenges around the globe. Is there any particular domain (land, sea, space, cyber, air) that you feel U.S. military forces must work the hardest in to retain their normally dominant capabilities over the competition?

Air-Sea Battle Office: As a supporting concept to the Joint Operational Access Concept, ASB’s particular contribution to the problem set of “operational access” has focused on the development of integrated forces capable of gaining and maintaining freedom of action in the global commons. That “freedom of action” includes the ability to gain and maintain localized air superiority, maritime superiority and space and cyberspace security and superiority, in addition to the ability to conduct “cross-domain operations” and maneuver. Emphasis is not on any one domain, but the ability to conduct operations across multiple domains as necessary to gain operational advantage over an adversary. Rather than consider a particular domain where U.S. forces would be most challenged—i.e., “must work the hardest”—in a scenario, think in terms of combining capabilities from all five domains to overcome that particular operational challenge. That would be thinking informed by the “JAM-GC” concept of operations.

Kazianis: As time passes, many nations are developing weapons platforms that considerably expand the range of various nations A2/AD capabilities. Recent reports suggest one nation may have anti-ship capabilities capable of striking from as far away as 4,000 kilometers (China’s DF-26 ASBM). How can the U.S. Military and JAM-GC negate what seems to be the ever growing challenge of weapons that can strike targets further and further away?

Kazianis: How has sequestration impacted the development and evolution of Air-Sea Battle and now JAM-GC? How will the recent budget deal help?

Air-Sea Battle Office: JAM-GC will address a full spectrum of integrated capabilities for A2/AD threats including non-materiel and materiel solutions. The concept(s) do not replace the Services’ unique programming, requirements, and acquisition processes, nor direct any specific funding actions. ASB and JAM-GC seek to inform the Services’ budgeting processes with and provide a medium—a vehicle—through which all four Services can collaborate to improve budgeting efficiencies so as to optimize overall combat capabilities.

Kazianis. There is obviously a lot of talk regarding the new long-range bomber project, or LRS-B. How will the LRS-B help further the development of JAM-GC?

Air-Sea Battle Office: The development of future U.S. weapon systems will by necessity take into account the emergence of formidable A2/AD capabilities that proliferated globally. Rather than the LRS-B helping “further the development of JAM-GC,” it may be more beneficial to consider how the JAM-GC concept may inform the development of the LRS-B bomber project and concept for its possible employment. While JAM-GC can inform thinking over how various joint capabilities can be operationally applied to address the A2/AD problem set, it is incumbent on each Service, consistent with their Title 10 authorities to “organize, train, and equip” their forces to implement those operational solutions.

Kazianis: There has been a spirited debate in the pages of TNI and other publications on the future of the submarine. Many have argued new detection methods may make submarines become more of a "mothership-style” vessel, deploying drone-type platforms to attack or monitor targets. Considering Air-Sea Battle assumed the advantage of U.S. submarines would be a long-term trend, how would you characterize the role of the submarine today when we think about JAM-GC?

Air-Sea Battle Office: As with any major weapon system that may be involved in operations that must overcome an adversary’s A2/AD environments, the Joint Concept for Access and Maneuver in the Global Commons (JAM-GC) seeks to identify necessary capability gaps, provide integrated counter-A2/AD capabilities, and develop a range of DOTMLPF (doctrine, organization, training, materiel, leadership and education, Personnel and Facilities) solutions. Additionally, JAM-GC may provide the operational framework whereby an asset like a submarine, traditionally associated with certain maritime and undersea missions, may expand its operational utility when employed in concert with capabilities from the other four domains. This example of a synergy derived by using capabilities from other domains to enhance the capability of another military asset is at the heart of JAM-GC thinking. In the specific case of submarines, it is for the Navy to determine their optimum employment, but decisions can be informed by the ASB and eventually JAM-GC operational concepts.

Harry Kazianis serves as Executive Editor of The National Interest. Mr. Kazianis also serves as Senior Fellow for Defense Policy at the Center for the National Interest, Senior Fellow (non-resident) at the China Policy Institute as well as a Fellow for National Security Affairs at The Potomac Foundation. He previously served as Editor of The Diplomat. You can follow him on Twitter: @GrecianFormula.