Al-Sisi to the Rescue 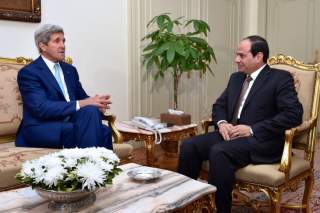 When Secretary of State John Kerry last Sunday morning inadvertently told an aide with Fox News’s open mic in front of him that he needed to get to the Middle East “tonight,” where did he go?

He went to Cairo. The Egyptians, as we know, have been attempting to broker a ceasefire between Israel and Hamas, who are engaged in bloody fighting in Gaza.

The ceasefire efforts initially failed, with Israel accepting Egypt’s bid and Hamas rejecting it, but Kerry had nowhere else to go. Clearly, whatever ideas U.S. policymakers might hold regarding Egyptian president Abdel Fattah al-Sisi, his country remains the default – one might say indispensable – venue for the making of Middle Eastern peace.

Thus does President al-Sisi, the general who last year, along with hundreds of thousands of Egyptians, overthrew the Muslim Brotherhood government and was this spring elected overwhelmingly by Egypt’s voters, restore his country’s legitimacy in the democratic world.

Al-Sisi, who took military training in the U.S., understands that peace can come only if a major Arab nation – his – stands as a bulwark against the radicals and terrorists now bedeviling the region and, ultimately, threatening our own security and wellbeing. He has offered his services to maintain stability and defeat radical elements in his part of the world. We should oblige him.

For beleaguered Egyptians, the conflict is both global and local. Every day the country is alerted to terrorist challenges in the Sinai Peninsula. Just this past Saturday 21 Egyptian soldiers were reported killed in a rocket attack on Al-Wadi Al-Gedid, on Egypt’s southern border.

Even under such daily threat, Egyptians have committed themselves to the task of building a firm democratic society. They convincingly stepped back from the edge of catastrophe and with their vote placed al-Sisi in office.

Mohamed Morsi, the Brotherhood’s leader who rode the popular wave of the Arab Spring (and the Brotherhood’s community organizing skills) into the presidency. He then commenced to create a regime of theological repression. Egyptians feel no sentimental attachment to this toxic religious autocrat. Nor should we.

It is time to move on and leave such anti-Western belligerence in the ash heap of history. (Sound familiar?)

Morsi was one of those periodic creatures who emerge in history to exploit popular, seemingly democratic revolutions only to turn against democracy itself. Thirteen million Egyptians cast their votes for him. With a razor-thin majority, his mandate was minimal, and he betrayed even that, dramatically overreaching his authority and enraging the people of Egypt, who are not by nature volatile.

However unseemly the task, al-Sisi took matters in hand and, with hundreds of thousands of Egyptians cheering him from the streets, steered Egypt away from a potential caliphate, which would have seen Egypt go the way of Iraq, Syria and even Iran. Morsi was allied with just such forces.

Last spring, 21 million grateful Egyptians – with no appreciation from the Obama administration – cast their votes for al-Sisi. That’s eight million more who voted for al-Sisi than voted for Morsi. Prior to the election, I led a congressional delegation to Cairo and met with the general, who made his intention to restore strong Western ties abundantly clear.

So Secretary Kerry finds himself appealing for help to a pro-Western democrat whom the Obama administration opposed in the first place.

Under President al-Sisi’s leadership, Egypt has sustained our bilateral strategic relationship and has met its obligations under the 1979 Egypt-Israel Peace Treaty.

What else might Egyptians and the rest of the civilized world appreciate about Egypt’s new direction? For starters, the new government has made a concerted effort to address social and economic problems besetting the country, something the radicals could not and would not do.

A wide spectrum of Egyptian citizens participated in the drafting of a new constitution to secure political, economic, and religious rights for all. Few in the Western media seem to have noticed.

Egypt is implementing justice for crimes committed where the previous government had shown lax enforcement – finally, for example, getting serious about enforcing sexual harassment laws. For the first time Christians are allowed to obtain permits to build churches. Under Morsi, radical mobs burned down Coptic churches with impunity.

True, Egyptian authorities, in a moment of turmoil, arrested a team of Al-Jazeera journalists they thought had crossed the line from reporting to agitation. President al-Sisi, responding to concerns from the democratic world, has expressed regrets about their arrests and long sentences. That should indicate something will be done to rectify the matter.

What outside critics miss is that he must wait for the appeal process to complete itself before he can pardon them. He must know that we expect him to do just that.

With all this in mind, and in appreciation of the pivotal role Egypt will play in bringing positive change, my colleague from across the aisle, Rep. Loretta Sanchez, and I have formed a bipartisan Egypt Caucus to foster understanding between the United States and a country trying to bring democratic stability to the Middle East.

So far, Egypt’s positive achievements have not been recognized, lauded , or reciprocated. The Obama administration has only now discovered how our interests align with Egypt’s. Egypt needs more than talk. It’s time for action.

As a faithful partner, the administration must cease withholding spare military parts as well as Apache helicopters, which are so critical to counter terrorism in the Sinai.

Egypt, under President al-Sisi’s leadership, is emerging as a key partner in building prosperity and democracy in a chaotic but vitally important region. If this government succumbs to radical rule it will be an immeasurably damaging blow to the people of Egypt and to all free people everywhere. Especially us.