Alberto Nisman: The Man Who Exposed Iran in Latin America 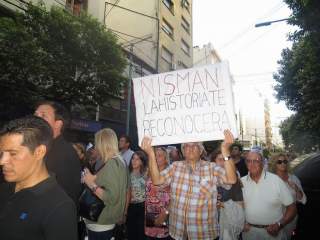 Monday morning, just hours before his death, was not the first time Argentine Special Prosecutor Alberto Nisman’s life was threatened. There were many others, he told me on numerous occasions when he came to Washington, D.C. to meet with his law enforcement colleagues and the national security community.

One particularly heinous threat came in February 2013. If he did not cease his investigation into the 1994 bombing of a Jewish Community Center in Buenos Aires within 24 hours, he and his two daughters would be killed. There were ugly photos of the fate he would face if he did not end his in-depth inquiry into who was behind the bombing. His daughters moved to another location.

The threatening email suggested he look for work abroad because "your friends the Americans are going to help."

Nisman filed a criminal complaint with federal authorities in connection with the threat he received.

We had invited Alberto to speak at the Foundation for Defense of Democracies about his findings. In what appeared to be an offhand comment that seemed obvious, he told me that when he was asked to assume responsibility for conducting the investigation into the Asociación Mutual Israelita Argentina (AMIA) bombing, he agreed to do so on one condition: that he be allowed to “follow the leads and take the investigation wherever the evidence trail led.” The prior judge on the case was impeached for “serious irregularities” in handling the investigation. It was in that environment that Nisman was operating.

Nisman was certainly a target. After all, he had detailed intelligence information not only about how Iran masterminded and executed Argentina’s deadliest terrorist attack but about Iran’s illicit activities throughout Latin America.

He wrote in granular detail about how Iran patiently plants people in cities throughout the Western Hemisphere, seeding Iran’s revolution. And, Nisman found, Iran used its embassies in the region to launch the revolution, leveraging the locals in unsuspecting communities. Mohsen Rabbani, who served as cultural attaché in Iran’s embassy in Argentina at the time of the bombing, is alleged to be one of the interlocutors today involved in whitewashing Iran’s role in the attack – including his own culpability.

Rabbani was not the only diplomat used to spread Iran’s brand of terrorism. In one of his extensive reports, Nisman explains that former IRGC commander, Javad Mansouri’s comments in a 1982 conference in Tehran was the "turning point for the regime's method to export the [Islamic] Revolution." Nisman notes that at this critical conference that Iran’s leaders decided to use violence and terrorism to achieve its expansionist goals, with Mansouri declaring, "Our revolution can only be exported with grenades and explosives." At the same conference, according to Nisman, Mansouri “called to turn each Iranian embassy into an intelligence center and a base from which to export the revolution."

It was not just Latin America that was in danger. In 2007, a Guyanese man, Abdul Kadir, plotted to blow up JFK airport in New York. Kadir, Nisman said, was “the most important Iranian agent" in Guyana, and a disciple of none other than Mohsen Rabbani. Had that plot—in which the attackers “attempted to enlist support” from Iran and terrorist groups like al-Qaeda—not been foiled, the suspects claimed it would have been an attack larger than the one that took place on 9/11 that killed 2,977 people.

From his role in the attack, Abdul Kadir is serving a life sentence in prison in the United States. Rabbani continues to operate freely in Latin America.

Nisman’s reports on how Iran’s long arm of terrorism works became a guide for law enforcement. And his reports helping North Americans understand the intricacies of Iran’s methods is one reason the House Foreign Affairs Committee invited him to testify before Congress in February 2013.

In theory, Argentine President Cristina Fernandez de Kirchner had nothing to fear from him appearing before Congress. After all, she was purportedly supportive of Nisman’s investigation. That was supposedly why she established a Truth Commission, wasn’t it? Looking back, it’s telling that the Argentine government denied him permission to travel to Washington, DC to testify. The hearing proceeded with other witnesses. Nisman’s name plate was there, alongside his empty chair.

The U.S. government’s role must not end with that Congressional hearing.

The lessons learned from Nisman’s exhaustive investigation should be reviewed and used as playbooks. Iran’s tactics have not changed, and to some degree, neither have the faces.

Questions must be asked – again and again – as to whether Iran should be trusted as a reliable partner if a nuclear deal is reached with the P5+1, and how the international community can make certain that there are airtight verifications in place to ensure compliance. Questions should also be asked about whether terrorism and nuclear files should be placed in separate policy silos, as they appear to be now when it comes to the negotiations. After all, according to the prosecution's claims in 2006, Argentina was targeted by Iran for terrorism after Buenos Aires' decision to suspend a nuclear technology transfer contract to Tehran.

And, one must ask, if Iran does not like the deal, with what would they threaten us?

Toby Dershowitz is vice president for government relations and strategy at the Foundation for Defense of Democracies.