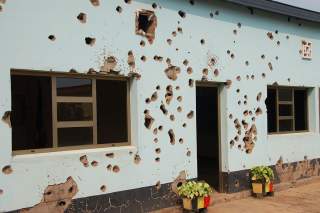 This week brought news that Bashar al-Assad’s regime had regained control of the Syrian city of Aleppo. The actual conditions on the ground have been difficult to discern, given the extensive use of propaganda by both sides, but Aleppo appears to have become the kettle of death and destruction that observers feared it would, even if evacuations are now taking place. The wrenching knowledge that abstract civilians are perishing has led many to invoke the Rwandan Genocide—Syria is becoming “another Rwanda,” as one UN envoy put it back in October.

You don’t have to downplay the carnage in Aleppo to judge that a specious comparison. The mass killings that ravaged Rwanda back in 1994 ended approximately 800,000 lives over a three-month span; the Syrian Civil War has been raging for more than five years, yet even the most alarming estimates put its death count shy of half a million. And while the Rwandan Genocide took place amidst the backdrop of a civil war, it was not itself an internecine conflict, waged by factions over land or representation or ideology. It was the baseless victimization of one ethnic group by another, the systematic slaughter by Hutu extremists of Tutsis and moderate Hutus. There’s a reason PBS made a documentary called “Ghosts of Rwanda” and UN general Roméo Dallaire titled his account Shake Hands with the Devil: the slaughter was so sudden, inexplicable, and betokening of mass madness, that its witnesses could only draw upon the supernatural. That puts Rwanda in a special category, one that can’t be drawn around every bloody battle.

But even if we allow elastic analogies to Rwanda, there’s another major problem: by that standard, we’ve already had “another Rwanda,” several of them, in fact, all in Africa, many directly linked to the original genocide, most of which we’ve overlooked. There was the First Congo War, which began after an exodus of Rwandans, among them many of the génocidaires, decamped to what was then eastern Zaire, destabilizing that country and eliciting a Rwandan invasion—hundreds of thousands would die over only seven months. The Second Congo War began one year later in 1998, and while its death toll has been disputed, the International Rescue Committee estimates that between 3 million and 7.6 million people were killed, making it the deadliest conflict since World War II. The Central African Republic is still immersed in a civil war between Muslim Séléka rebels and Christian anti-Balaka militias, one that’s displaced nearly a million people and left half the country in need of aid.

If you’re looking for a current Rwanda juxtaposition, though, it’s the South Sudanese Civil War that chills the bones. South Sudan, the world’s newest nation, was birthed to protect the black Christians there against the genocide inflicted by the Sudan government in the north, only for it to deteriorate into its own bloody conflict, another Rwanda triggered by another Rwanda. I wrote about the South Sudanese Civil War for The National Interest back in autumn 2015, and since then it’s only gotten worse. Thanks to the clashing Dinka and Nuer peoples, the country is presently on “the brink of an all-out ethnic civil war,” as the UN has warned, and “the cusp of full-scale genocide,” per the Council on Foreign Relations. Estimates of the death toll range from tens of thousands up to 300,000.

Civilian casualties haven’t just been a byproduct of these aforementioned conflicts; they’ve been the distinguishing feature, with villages torched, women raped, babies killed, child soldiers recruited. War in Africa is very often total war, with few distinctions drawn between militants and innocents, which is why the line between combat and genocide is so often blurred. Those who encourage Western intervention against Assad warn that a universal standard of human rights is being violated and tout our obligation to protect the innocent. Yet they rarely notice the unguarded innocent in the Congo and Sudan. Africa is the invisible continent. Our conception of it is a cartoon balloon that jangles with western touchstones, blood diamond boycotts and idiotic #StopKony memes, acknowledged only when it intersects with our need to feel socially conscious. Why?

The most likely explanation is simply one of visibility. America’s interests in the Middle East are minimal but they’re still there—old alliances with the Gulf States, old enmities with Iran, the present war against jihadist terrorism, refugee flows flummoxing Europe—whereas the United States has little familiarity with Africa. We had no colonies there, unless you count the informal case of Liberia, and even with the recent expansion of ISIS and rise of Boko Haram, Mesopotamia, not Libya or Nigeria, remains the epicenter of the war on terror. Head further south and dense rainforests obscure Africa’s dark heart from both Western attention and moral norms.

None of this should be read as a case for nation building or military intervention in Africa. It’s meant merely to marvel at the most glaring hypocrisy of our foreign policy, a blind spot that blots out an entire continent, which bestows the status of global supervillain on Bashar al-Assad while Salva Kiir remains an unknown. The West has a double standard when it comes to Africa. Perhaps the first step towards remedying it is to acknowledge that Aleppo is not another Rwanda but South Sudan could become one.