Alexander Lukashenko Gets Ready to Rumble With Russia 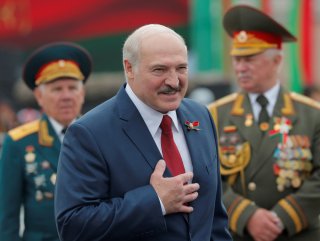 Belarusian dictator Alexander Lukashenko is facing a reelection fight unlike any other in his nearly twenty-six years in power.

Ahead of the country’s election this Sunday, street protests and opposition rallies have proliferated amid a growing synergy among assorted opposition candidates keen on deposing the long-serving post-communist strongman. But Lukashenko faces an even more serious challenge from abroad because his administration’s once-cozy ties to Moscow have deteriorated markedly in recent months, taking with them the Belarusian president’s most durable political asset.

The reasons for the downturn in ties can be traced back to the end of 2019 when Russian president Vladimir Putin appeared to be on the cusp of integrating Belarus into the Russian Federation. Minsk had been receiving subsidized oil and gas from Russia for years, while a mutual economic agreement had made it easy for Belarusians to live, work, and trade easily across the common border between the two countries. Things came to a head at a bilateral summit in Sochi, where Putin laid out plans to merge his parliament with that of Belarus and transform their economic union into a political one. Street protests in Minsk underscored the opposition of Lukashenko’s citizens to the idea, and the Belarusian leader ultimately opted to parry the offer. But he also did more, refusing to extend a bilateral energy treaty set to expire at the beginning of 2020. A follow-up summit in Saint Petersburg advanced neither objective and by January 1 oil flows between the countries had stopped.

Lukashenko’s stance not only ensured Belarus’ sovereignty in the short run but also allowed the country to enter the global energy market as a buyer. During this period, Lukashenko’s administration held talks with several potential providers, including Kazakhstan and Poland, over the prospect of energy purchases. Even the United States contributed with a sale. Russian oil eventually resumed flowing to Belarus, but not before Lukashenko had succeeded in improving his standing on the international scene.

The Belarusian president’s maneuvers didn’t stop there. In June of 2020, federal investigators raided the office of Viktor Babariko, a popular opposition candidate attempting to register for the upcoming presidential election. The move was rightly condemned as election tampering, but Babariko’s relationship with Russia proved to be significant. Before his arrest, Babariko had spent twenty years as head of Belgazprombank, a large Belarusian bank that is 99.6 percent owned by two major Russian companies with deep ties to the Kremlin. State authorities also took the additional step of raiding offices, arresting executives, and purging the administrative staff of Belgazprombank on corruption and tax evasion grounds. By doing so, Lukashenko demonstrated his willingness to antagonize Russian business interests—and, by extension, powerful personalities in Moscow—in order to eliminate a threat to his reelection.

But Lukashenko’s latest move is by far the riskiest. On July 29, Belarusian security services raided a sanitorium outside Minsk and arrested thirty-two Russian nationals allegedly belonging to Wagner Group, a company of mercenaries known to have participated in conflicts in Syria, Ukraine, and Libya. According to Minsk, the men belong to a larger force of two hundred mercenaries that had been sent to Belarus to plot provocations and terrorist acts during the run-up to the election.

The Kremlin has denied the allegations and insisted that the group was only transiting through on its way to other destinations. But the situation belies something altogether different. For the first time since integration talks stalled last year, Russia has been caught taking measures to thwart Lukashenko’s aspirations for continuity.

Where matters go from here remains to be seen. The capture of the mercenaries gives the Belarusian leader at least some leverage in future talks with his Russian counterpart. Ukraine has already requested the extradition of twenty-eight of the captured men on terror charges stemming from their alleged involvement in the ongoing fighting in that country. Lukashenko could, therefore, leverage Kyiv’s interest in hopes that it might deter Russia from making further moves against him.

However, it’s clear that the Belarusian leader is playing an exceedingly risky political game. His dogged determination to win a sixth term has caused Lukashenko to jeopardize his country’s relationship with its largest trading and military partner. As a result, even if he perseveres in Sunday’s election, the Belarusian president could soon discover that his political future is still decidedly uncertain amid a widening rift with Russia.

Matt Maldonado is a research fellow at the American Foreign Policy Council in Washington, DC.