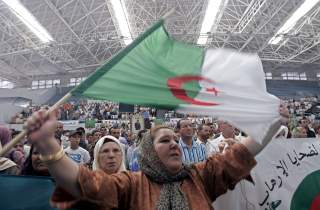 Algeria is vulnerable to terrorism. As the Islamic State loses momentum, fears are growing that fighters could return home and spark new insurrections, a familiar tale that Algeria has little interest revisiting. Unfortunately for Algerians, the country risks a return to the “Black Decade” of the 1990s when fighters who traveled to Afghanistan to wage Jihad came back to Algeria radicalized and ignited a religious war. While there are only 175 known ISIS members from Algeria, its neighbors, Tunisia and Libya, have seen thousands of youth join the extremist group. An influx of radicalized, unemployed youth threatens Algeria’s stability and economic development. Algeria’s Ambassador to the United States Madjid Bouguerra addressed how his country seeks to meet these challenges at a recent discussion at the Center for National Interest.

Algeria’s counterterrorism strategy is centered on preventative measures and deradicalization. Attempting to avoid another hot conflict on its soil, the Algerian government seeks to reintegrate former fighters into society as occurred following the Black Decade, when the government offered a path to reconciliation for ex-extremists. Ambassador Bouguerra recalled that “all terrorists who surrendered themselves to the authorities in the country or abroad were held legally accountable for their acts.” On the one hand, President Abdelaziz Bouteflika had to ensure that terrorists were held accountable. However, in order to take the first step towards reconciliation, he promised that the penalties sentenced to those who turned themselves in “were either reduced or suppressed following the conclusions of independent judiciaries.” Providing former mujahideen with an opportunity to renounce violence and return to a peaceful livelihood helped to dissolve the antagonism between fighters and the state.

In today’s context, the Algerian government seeks to employ similar methods to reintegrate returned ISIS fighters into society. However, to do so, Algeria must first focus on isolating returning fighters to prevent their ranks from swelling. Newer methods of recruitment depend on propaganda that radicalizes people using extremist ideologies in decentralized networks but leaves the choice of what actions to take up to the individual. As this method focuses on people’s thoughts, and not their actions, Algeria’s strategy to quell terrorism emphasizes prevention and deradicalization over traditional counterterrorism practices such as countering terrorist financing and targeted strikes. The government is waging a war of ideas, with peace, inclusion and respect for the rule of law pitted against violence, exclusion and radicalism.

Ingraining a peaceful interpretation of Islam in believers’ minds is particularly critical for dispelling extremism. The state encourages imams to regularly and explicitly denounce radical interpretations of Islam that lead to violence and instead focus on preserving an “authentic Islam” that is based on the fundamental values of tolerance, dialogue, mutual acceptance, respect for differences and peaceful coexistence. Ambassador Bouguerra called on schools to reinforce these values starting in kindergarten going through university to ensure radicalism has no place in their education. Schools can act as not only a source of peaceful values, but also as a community of inclusivity, the lack of which can leave an individual vulnerable to radicalization. The ambassador also stressed the salient cultural and educational roles of mosques and imams in the lives of youth, and called on religious influencers to take a strong stand against extremism.

The ambassador proclaimed that the state “believe[s] that the best tool [to counter extremist discourse] for the moment is democracy.” A participatory democracy that allows citizens to express their political aspirations and economic needs is more likely to promote peaceful dialogue that averts extremism.

Economic development has also been shown to diminish the pull of radicalism by providing work for unemployed young men, traditionally the population most susceptible to terrorist recruitment. For example, one organization in Algeria provides no-interest loans of up to $100,000 to help young Algerians start their own businesses. Through employment opportunities, young Algerians are less prone to join extremist groups to compensate for a lack of belonging or worth. As a result, the ambassador touted socioeconomic development as a bulwark against violent extremism.

Regional cooperation presents another difficult challenge for Algeria. Ambassador Bouguerra noted the challenges of securing a 6,500 km border largely running through remote desert areas. The danger of this porous border was underscored in 2013, when foreign terrorists crossed illegally and carried out a deadly attack on an Algerian gas plant. Bouguerra observed that in order to avert similar tragedies, Algeria requires cooperation with its neighbors: “In today’s world, you can’t deal with others by yourself. You need to be within a strong group, and we can be a strong group.” Due to instability in Libya, and Algiers’ disagreement with Morocco over self-determination in Western Sahara, cooperation with neighbors has been elusive.

Ambassador Bouguerra is confident that Algerian support for a peace process brought about by Libyans and for Libya will eventually benefit Algeria’s border security. Prospects for cooperation with Morocco appear less promising. Although Algeria hopes that the issue of Western Sahara will not obstruct cooperation on other issues, the conflict is a persistent source of tension between Algiers and Rabat. “We are ready to work with Morocco to improve our bilateral relations on one condition: that our brother in Morocco should not come with a condition to Algeria. Either you change your position on the issue of Western Sahara, and then we can improve [our relations] or you don’t change, and we don’t improve [our relations].” Algeria’s steadfast support for self-determination in Western Sahara is an obstacle to bilateral cooperation on illegal immigration and drug trafficking, two issues that exacerbate the growth of extremist groups.

The ambassador stressed the importance of strong U.S.-Algeria ties for regional security. Algerian officials frequently meet with U.S. military officials. All AFRICOM commanders have met with Algerian officials at least once, and there are already annual exercises involving both the United States and Algeria. The next one, Flintlock, will take place in March 2019. These exercises provide Algeria with an opportunity to enhance its military capacity to combat terrorism, which complements its ongoing efforts to win the war of ideas against extremism.

Michael Greco is an intern at the Center for the National Interest.