For All Sides, Syrian Peace Will Involve Dealing with the Devil 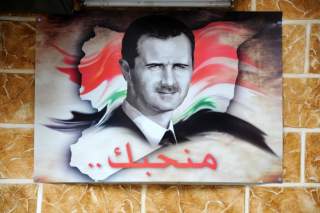 Since 2011, various luminaries, organizations and governments have proffered plans to stop the carnage in Syria, and to create a unity government to enable constitutional reforms and clean elections in which the millions of Syrians who have fled to neighboring countries (mainly Lebanon, Jordan and Turkey) can participate.

The Arab League dispatched a mission to Syria at an early stage of the war, and a sixty-person monitoring group resulted; it lasted barely a month and was driven out by the violence.  Kofi Annan tried to create peace and failed, resigning in 2012. His successor as UN peace envoy, Lakhdar Brahimi, gave up in 2014. The Iranians offered their six-point peace plan at the end of that year; it withered on the vine, as did the proposals made by Assad in 2013. The United States and Russia held meetings on Syria in 2012, in the wake of the crisis created by Assad’s use of chemical weapons, but failed to produce the barest blueprint for a settlement.

If peace hasn’t taken root in Syria during the past four years, the problem hasn’t been a lack of effort.

The attempts listed above failed for their own particular reasons, of course, but they also all encountered the same immovable obstacles—ones that persist.

Assad has steadfastly refused to resign in the interest of jump-starting peace negotiations. He has denounced his foes as terrorists and claimed the right—no, the duty—to wage war against them. He favors diplomacy in principle but in practice insists on engaging only those who, in his assessment, haven’t “betrayed” Syria, which means that he has in effect excluded the opposition forces possessing the most military might. Without their participation, a settlement will amount to a piece of paper.

Assad’s stubbornness may well reflect a flaw in character, but it has been enabled and sustained by backing from Russia, China and Iran. The Russians and the Chinese have quashed Security Council resolutions that they have deemed one-sided in blaming solely Assad’s government for the violence. They have also blocked efforts to impose sanctions on Syria’s rulers.

Together with Iran, China and Russia have also rejected the demands of Assad’s adversaries and the United States, major European governments, Turkey and the Gulf monarchies: namely, that his resignation must precede peace talks.

The Syrian government now controls barely half the territory it did when the protests against it erupted in 2011 and segued into a civil war after the leadership responded by unleashing its security forces. Still, despite the gains made by anti-regime groups, Assad hasn’t become more flexible. He retains the support of powerful, determined patrons. Iran has deployed senior military advisers to support his army and induced Hezbollah warriors to take up arms in his behalf. Russia has supplied his military with arms.

And now, Vladimir Putin has sent a contingent of naval infantry along with armored vehicles and air defense missiles to Syria. More importantly, Russian jets are launching airstrikes, supplemented by ship-based missile attacks, to help the Syrian army and its Hezbollah allies regain lost ground, especially in Idlib province in the northwest, whence the anti-regime forces have attacked Latakia, threatening the coastal homeland of Assad’s Alawite minority which dominates the government.

Don't expect Assad to quit in order to help the latest peace effort, a multi-nation conference that met in Vienna last month and will convene again in two weeks. He will hold on unless Iran and Russia force him out. They are not yet prepared to do, even though they probably understand that a deal on Syria will prove impossible as long as they cling to him.

The upshot: Assad runs a blood-soaked regime but the insistence of the West, Turkey and the Gulf monarchies that he must go before serious negotiations are feasible amounts to a deal killer. The United States finally appears to understand this and has been softening its position, albeit not publicly.

Not so Saudi Arabia and its Persian Gulf allies, however, and Washington’s ability to change their minds, even were it to try, remains uncertain. Soon after the Vienna meeting, Saudi Arabia’s foreign minister again demanded Assad’s ouster—as if that would convince the hard-bitten power brokers (from the military and the intelligence services) in the Syrian government’s top echelons, notably Bashar’s brother Maher, commander of the Republican Guard and the Fourth Armored Division, to fold their tent and fade away.

The issue of Iran’s participation in peace negotiations has been no less contentious than Assad’s fate. The Gulf sheikhdoms, above all Saudi Arabia, are dead against it. To them, the war in Syria involves far more than the future of Assad’s regime, which in their minds matters mainly because it and Hezbollah are Iran’s principal partners. Ankara and Riyadh believe that Tehran seeks to consolidate its political and military influence from the Iranian homeland through Iraq, Syria and Lebanon into Yemen. Not surprisingly, the Turks and the Gulf monarchs want Iran locked out of peace talks. Hence, at the Vienna conclave, the Saudis spent their time bashing Iran, with the latter responding in kind.

Though Ankara and Riyadh don’t want Iran at the bargaining table, given Tehran’s strong stake and influence in Syria, there can’t be a deal unless the Iranians retain their recently won seat. If Turkey and Saudi Arabia persist in trying to evict Iran from the conference room they will destroy whatever chances diplomacy has. Besides, Russia, whose interests in Syria converge with Iran’s, will not permit Tehran’s exclusion. Indeed, Iran’s presence at Vienna owes to Moscow’s insistence, and the Obama’s administration acknowledgement that Moscow has a point.

Thus, if a shift in America’s position on Assad represents the first requirement for avoiding yet another failed attempt at peace, the second involves a change of attitude toward Iran on the part of Turkey and Saudi Arabia, the pivotal Persian Gulf state.

The third requirement for a settlement in Syria: the West must separate the crisis in Ukraine from the carnage in Syria, dealing with each separately.

Russia’s annexation of Crimea, its military intervention to create breakaway statements in the Donetsk and Luhansk provinces in Ukraine’s east, and its military muscle-flexing in the Baltic region (through stepped-up, pugnacious submarine and air patrols) have poisoned the well. Mistrust between Putin and the West runs so deep that the idea of working with him on Syria has been attacked as appeasement, the abandonment of Ukraine and naiveté about Putin’s true purpose: emplacing troops in Syria to end his isolation by presenting himself as the West’s soulmate in the struggle against terrorism.

But just as peace talks in Vienna can’t succeed unless the Saudis abandon their obsession with excluding Iran, Syria’s war won’t end if the West refuses to work with Russia on that front unless and until it changes its conduct in Ukraine. Open-ended fighting in Syria will only strengthen the Islamic State (whose statelet already spans the Sunni areas of Syria and Iraq) and perpetuate refugee flows to Europe, whose unity has been severely strained by bickering over which EU country should take how many refugees and how much say Brussels should have in the matter.

The Russians aren’t going to leave Syria anytime soon, so the options involve working with them, working against them, ignoring them or hoping that they fail.

The second option will require ramping up the United States’ military role in Syria, including on the ground. President Obama wants to avoid that, his recent decision to send a small number of Special Forces to help Syria’s Kurds fight ISIS notwithstanding. Even though a February 2015 poll showed that the growing strength of ISIS had, for the first time, convinced a majority (57 percent) of Americans to support sending ground troops to Syria, he will not commit a large number of forces; a small number will prove insufficient to change battlefield outcomes.

Besides, for all the talk of “moderate Sunnis” and “secular” leaders within the opposition, the most powerful adversaries of the Syrian state—ISIS aside—are radical Islamists committed to creating a draconian shari’a-based polity. That explains in part why Assad, despite the savagery of his war, still retains support in Syria—not just among fellow Alawites but also among Sunni urban professionals, whose lifestyles and mores would be deemed apostasy by the radical Islamists, and religious minorities, whether Christians, Jews, Druze, Assyrians, Armenians or Greeks. So if Washington does pour more military resources into Syria, which groups will it back, and what are the odds of success given the choices available?

As for ignoring the Russian emplacement in Syria or hoping that it fails, the first response amounts to escapism, not strategy, while the second posits a dubious connection between a positive outcome occurring in Syria and Putin receiving his comeuppance.

War-ravaged Syria does not, alas, offer a choice between democratic secularists and Assad, but between his murderous regime and a clutch of millenarian Islamist insurgents, above all ISIS, Jabhat al-Nusra (an Al-Qaeda affiliate) and Harakat Ahrar al-Sham, which cooperates with Nusra. The latter two, not moderates, democrats and secularists, are the strongest of the myriad groups battling Assad. They are also the mainstays of the Jaish al-Fath coalition, which the Saudis and Turkey back politically and support materially.