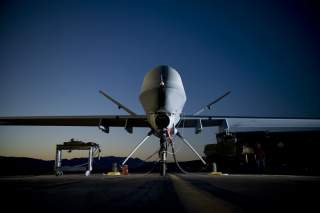 WHEN THE Senate Select Committee on Intelligence released its “torture report” in December 2014, it reignited the battle over the George W. Bush administration’s conduct of the “war on terror.” Unfortunately, the interrogation program was not an anomaly in its lack of transparency. A similar problem exists with the U.S. drone program—which, after more than ten years of use and nearly two years after President Barack Obama’s speech promising greater transparency and accountability, remains shrouded in secrecy and uncertainty.

If an internal critique of the U.S. drone program exists, it has been kept from open discussion and debate. Yet the most basic questions about the program have not been answered: What are the goals of the program? Are drones effective in accomplishing those goals? What metric is used to evaluate their effectiveness? Such queries arise at an important moment in American history. The Obama administration is faced with defining its legacy. The administration, which inherited two wars, has struggled with the dilemma of winding down military actions in Iraq and Afghanistan at the same time that threats from new adversaries have created new challenges for U.S. and international security. In response, the administration has relied heavily on the use of drones, which has allowed them to avoid further on-the-ground engagement, but has raised many legal, ethical and strategic questions in the United States and around the world.

Those critical of the U.S. drone program are quite reasonably asking whether strikes—particularly in Afghanistan, Pakistan and Yemen—are achieving measurable gains beyond an estimated four thousand deaths of largely unidentified males. Instead, they argue that continued (and unaccountable) drone attacks are actually alienating foreign populations and governments. Without a reasonable and clear metric, it is impossible to determine whether strikes should be continued, whether the program should be scaled back or even whether it should be halted altogether.

Without a clear enunciation of U.S. drone policy, oversight is inhibited. The result is greater ambiguity. This cycle of uncertainty compromises the ability to determine whether current drone use is effective in accomplishing national-security objectives. As America continues to rely upon air strikes as a central pillar of its counterterrorism strategy—more recently exemplified by its air campaign against the Islamic State—and expands operationalization of drones, it must emphasize developing and releasing clear policy goals that are consistent with U.S. national-security objectives and foreign-policy ideals. Only then can policy makers determine whether current strategy is effective and is achieving long-term goals.

DRONES AND their use by the United States are largely shrouded in mystery. Some see them as an essential counterterrorism tool; others see them as foreshadowing a future out of The Terminator in which drones and autonomous weapons target and fire at will. The White House’s secrecy regarding its drone policy has not done it any favors, and has allowed misconceptions of the program and of drone technology in general to flourish. A prominent example was Senator Rand Paul’s 2013 filibuster of John Brennan’s nomination to head the CIA, in which the senator conjured up a scenario where Americans sitting in cafés might find themselves unexpectedly targeted by Hellfire missiles.

The Obama administration has put forward a wealth of rhetoric supporting the idea of transparency. In his 2013 speech at the National Defense University (NDU), Obama underscored the importance of transparency and accountability for the U.S. drone program. The president pledged to “review proposals to extend oversight of lethal actions outside of war zones that go beyond our reporting to Congress.” He also noted that “the use of force must be seen as part of a larger discussion we need to have about a comprehensive counterterrorism strategy.”

The president raised the issue of effectiveness in his NDU speech, saying that effectiveness should not be confused with good policy or moral decision making. In his words:

As our fight enters a new phase, America’s legitimate claim of self-defense cannot be the end of the discussion. To say a military tactic is legal, or even effective, is not to say it is wise or moral in every instance. For the same human progress that gives us the technology to strike half a world away also demands the discipline to constrain that power—or risk abusing it.

While Obama’s remarks were welcomed at the time, the impact of his words was limited. A year later, when the president delivered a speech at West Point, little outward progress had been made in clarifying U.S. policy. The president echoed his NDU talking points and again highlighted the risks involved in not being clear and transparent about U.S. counterterrorism policy:

But as I said last year, in taking direct action we must uphold standards that reflect our values. That means taking strikes only when we face a continuing, imminent threat, and only where there is . . . near certainty of no civilian casualties. For our actions should meet a simple test: We must not create more enemies than we take off the battlefield.

In short, the president recognized that not being transparent and accountable could come at a cost and create long-term risks, saying that when the United States “cannot explain our efforts clearly and publicly, we face terrorist propaganda and international suspicion, we erode legitimacy with our partners and our people, and we reduce accountability in our own government.”

But while Obama has paid significant lip service to transparency, his administration’s actions have fallen short of this promise. Under pressure and court order, the administration did release two memos detailing the legal rationale behind targeting U.S. citizens with drone strikes, but the administration has not been forthcoming with the release of documents that outline the United States’ overarching strategy, concrete objectives or end goals. In fact, nearly two years after the president’s NDU speech, the only new policy of note came with the release of export guidelines for drones in February 2015.

ONE MEASURE of drone efficacy is analysis of the known U.S. drone strikes. Since 2004, the United States has conducted about five hundred drone strikes in Pakistan, Yemen and Somalia, based on research provided by the New America Foundation, the Long War Journal and the Bureau of Investigative Journalism. Micah Zenko has reported that fifty of those strikes were conducted under Bush, while four hundred and fifty were under Obama. The United States is now believed to have used drone bases in at least twelve countries: Afghanistan, Djibouti, Ethiopia, Kuwait, Niger, the Philippines, Qatar, Saudi Arabia, Seychelles, Turkey, the United Arab Emirates and Yemen.

The use of drones is an integral part of the strategy against the Islamic State, and the United States is known to be carrying out air strikes in Syria and Iraq using both manned and unmanned systems. But beyond measuring casualties and identifying high-level targets that have been killed, the metric for gauging effectiveness is unclear. And, as Obama himself noted, the deaths of innocent civilians among the “legitimate” targets can turn populations against the United States and undermine its counterterrorism efforts.

Still, Washington remains committed to targeting high-level Al Qaeda, Al Qaeda-affiliated and Taliban leaders, particularly in Pakistan. The New America Foundation and the Long War Journal have produced lists containing details on sixty-four high-level leaders reportedly killed by the U.S. drone program in Pakistan, including targets identified as weapons and explosive experts, commanders and planners, and other senior leaders. They include Osama al-Kini, Al Qaeda’s then chief of operations in Pakistan; Badar Mansoor, thought to be Al Qaeda’s most senior leader in Pakistan; and Hakimullah Mehsud, commander of the Pakistani Taliban. These targets are perhaps much less well known than the American citizen Anwar al-Awlaki, who was targeted in Yemen for his role as an “operational terrorist leader” and his participation in planning attacks on Americans.

The targeted-killing program has been ongoing for more than a decade. But there remains troubling uncertainty regarding the legal basis for the program under both domestic and international law. Under U.S. law, the 2001 Authorization for Use of Military Force authorizes lethal force against “those nations, organizations, or persons [the president] determines planned, authorized, committed, or aided the terrorist attacks that occurred on September 11, 2001.” To date, the administration has interpreted this legislation broadly, saying that it covers the Taliban, Al Qaeda and their “associated forces.” However, it remains unclear who the U.S. government identifies as “associated forces,” or how combatant status is determined, or how “participation in hostilities” is defined.

The law of armed conflict has provided the international legal basis for U.S. action against Al Qaeda and the Taliban. However, as U.S. involvement in emerging and ongoing conflicts evolves, and the threat of nonstate actors increases, uncertainty about whether U.S. drone use is consistent with rule-of-law standards is growing. This absence of clarity arises from the lack of a designated “battlefield,” along with confusion about what counts as “hostilities” and who should be considered “combatants.” Moreover, questions regarding the U.S. definition of an “imminent threat” risk undermining U.S. action.

The secrecy surrounding the drone program, particularly the aspects under CIA control, makes oversight and proper accountability difficult, as it is unclear who is involved in the process, how the chain of command works and who is ultimately responsible for strikes. Washington will need to focus on creating clear rules, even for the covert aspects of its drone program, that contain strong accountability measures and a precise determination of the state and nature of the conflict.