The Allure of the Civilizational State 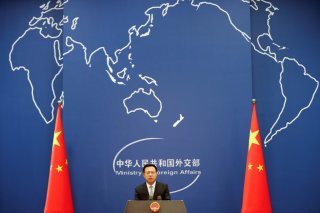 How do obscure ideas from the ivory tower enter the halls of power? In 2019, London School of Economics professor Christopher Coker published a book on “civilizational states,” describing a new ideological threat to the world order emerging from Russia and China. Three years later, on April 1-3, 2022, four policy advisors to Secretary of State Mike Pompeo spoke at a conference in New York City on the theme of “Civilizational States and Liberal Empire—Bound to Collide?”

Convened by Telos, a quarterly journal—oddly enough—for “critical theory of the contemporary,” the conference attracted a crowd of around thirty academics and intellectual oddballs. Not much consensus was reached. The Pompeo officials themselves disagreed. But their very participation at the event confirms that Coker’s ideas have caught on in a big way.

Launched in 1968, Telos founder Paul Piccone dreamt of articulating a radical political theory for the American Left. The journal translated key works of critical theory in the 1970s and 80s, before controversially turning to Carl Schmitt and religion in the 1990s after the New Left dissolved. Since Piccone’s death in 2004, his widow Mary has kept Telos afloat through institutional subscriptions and book sales. The journal now defies simple Left/Right distinctions as it continues to theorize about liberalism’s discontents.

The civilizational state appeals to non-liberals of all stripes.

Conference organizer and Telos associate editor Adrian Pabst exemplifies both tendencies in a 2019 essay castigating “liberal capitalism” for “cultural standards that glorify greed, sex and violence.” “Ultra-liberalism,” he claims, is destroying the West’s “heritage of Greco-Roman philosophy and law [...] Judeo-Christian religion and ethics” and the humane traditions of other world cultures. He is not bullish on Russia and China as he sees their desire for top-down control as equally damaging, but he still sympathizes with their revolt against global rootlessness.

According to Pabst and Coker, Russian and Chinese leaders are trying to legitimize their illiberal behavior by claiming to inhabit and represent a different moral universe than the rest of the world. Since 2012, Putin has called Russia a “state-civilization, reinforced by the Russian people, Russian language, Russian culture, Russian Orthodox Church and the country’s other traditional religions.” Xi Jinping, meanwhile, has stated that he means to build a “spiritual civilization“ with “excellent traditional Chinese culture” and “socialist values.”

Whether Putin and Xi are earnest or not, their style of rhetoric has been catching on across the world.

The sentiment is not new. Since the early-nineteenth century, European Romantics have argued that the human race flourishes best when particular societies can express their distinctive ways of living. Today, national-populists like the Israeli philosopher Yoram Hazony are trying to revive the same ideas through elaborate political theories. But the coarseness of actual populist rhetoric still repulses too many. They cannot help but evoke a sordid history of pointless wars and petty violence.

Civilizational states, however, capture the same impulse without the same historical baggage. Those who speak the language of “civilization” can evade questions about territories, ethnicities, and warfare with high-minded talk of “cultural pluralism.” If asked, as Harvard political scientist Samuel Huntington did in his landmark Foreign Affairs essay, whether civilizations might clash, one might reply that these are individual states seceding into their own moral universes; they are not assembling big world-shaking blocs (though, as we will see, this may not be true).

Might such ideas have a political future? Will they lodge in the popular imagination and shape political decisions? This is what the Telos circle wanted to know.

An air of self-importance filled the conference. One month prior, New York Times columnist Ross Douthat referred to Russia as a civilizational state in an op-ed about Putin’s war in Ukraine. This was the most mainstream media coverage of the concept yet. Civilizational states previously received attention in the Financial Times and the Economist. But the term really took off after Bruno Maçães, Portugal’s secretary of state for European Affairs from 2013-15, incorporated the concept into his widely read political theories about Europe and the world.

A critic of liberal universalism since his doctoral studies at Harvard, Maçães entered the mainstream of American commentary with the timely release of his 2020 book, History Has Begun. Armed with a provocative diagnosis of America’s discontents, he quickly made his way around the think tank and podcast circuit amid a year of civil unrest and Twitter-mediated introspection. Maçães even picked up a favorable book review in the Wall Street Journal before Douthat hosted him for a discussion at the American Enterprise Institute in December 2020.

Maçães’ prognosis is much darker than Coker’s in that he believes the liberal “West” is already dead. He writes that the United States is becoming a civilizational state of its own that defends a postmodern “principle of unreality” as its own distinctive way of life—”Everyone can pursue his or her own happiness so long as they refrain from imposing it on others as something real—as something valid for all.” Only Europe remains truly modern and liberal, grounded in objective truth, whereas America under Donald Trump flouted both international norms and facts themselves.

The upshot for Maçães is that he can argue for European integration using the same emotional appeals as the national-populists by branding it as civilizational state-building. If the concept of national sovereignty is unique to European civilization and non-European civilizational states are on the rise, then Europe must paradoxically unite to defend its tradition of national sovereignty. He reframes liberal nationalism as a distinctly European rather than a universal project. Clever.

There is just one big problem.

Despite Maçães’ optimism for Europe, these civilizational state-building projects are likely to be disastrous for small states everywhere. He argues that a world order where civilizational states (including a strengthened European Union) maintain a balance of power would be truly pluralistic. But such a world is also one where, in Maçães’ own words, states “absorb [their] neighbors” because “the state has the paramount task of protecting a specific cultural tradition [in] all the regions where that culture is dominant.” This is why Douthat calls Russia a civilizational state.

Can international norms exist in a world where the legitimating ideologies of multiple large states treat moral compromises as existential threats to their “civilizations?”

If world leaders genuinely want to create such a future as Maçães or perhaps Putin do—then policymakers must prepare for the worst. And if these ideas catch on more broadly, political leaders may soon find themselves trapped by a believing public.

The former Pompeo officials explored these possibilities at the Telos conference. They had been no stranger to the rhetoric of civilization while in office. Since 2017, journalists trying to work out a “Trump Doctrine” repeatedly posited a “Clash of Civilizations” worldview. The conference proceedings demonstrate that such claims, though likely wrong, were not entirely unwarranted. A few aides may have even started thinking about civilizational states as early as 2019.

David Pan and Russell Berman served respectively on the Commission on Unalienable Rights and the Policy Planning Staff, where they had to deal concretely with problems of world order. They also happened to be the editor and editor emeritus of Telos, having known Paul Piccone personally and worked on the journal for several decades. The two would have been aware of “civilizational states” early on from Adrian Pabst’s contributions to the Fall 2019 issue of Telos.

But the main intrigue at the Telos conference centered on Kiron Skinner, director of Pompeo’s Policy Planning Staff from August 2018-19, and Miles Yu, Pompeo’s chief policy planner for China. The two had strong disagreements over the titular theme. Skinner gained much notoriety in office after a public appearance where she described competition with China as “a fight with a really different civilization” and (incorrectly) “the first great power competitor that is not Caucasian.” She was dismissed in 2019, while Yu rose to become Pompeo’s personal advisor.

Their opinions matter because ideas exercise real power in the Policy Planning Staff.

The Policy Planning Staff reports directly to the secretary of state to advise on matters of global strategy. They also aim to ensure that the six regional bureaus responsible for executing policy decisions do not set local priorities at odds with bigger-picture concerns. Appointees tend to straddle the worlds of academia, think tanks, and government service. Notable past policy planners have included George Kennan, Francis Fukuyama, and Paul Wolfowitz.