America’s Fin de Siècle: How Unbound Liberalism Has Brought the Country to Its Knees 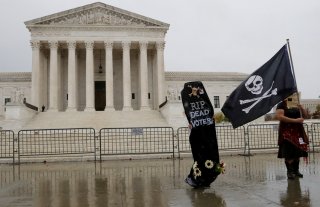 Much like America in the late twentieth century, Europe in the last decade of the nineteenth century seemed to be at the peak of its power. Its empires ruled over vast colonial dominions unlike any in history, while its culture set the standard for the world to emulate. Although there were occasional warning signs that established power centers might be tested in years to come, and that various collectivist ideologies had begun to stir beneath the surface, the dominant sense was one of enduring confidence that the extant power structure was sound and that Europe’s global civilizing mission would continue unabated. And yet, only fourteen years into the twentieth century the world was on fire, with the shocks of the Great War crippling France, sapping British resources, and setting Germany—though defeated—firmly upon a revanchist trajectory. In a mere four years the grand civilization of imperial Europe had committed collective suicide in the trenches on the Somme and in the fields of Tannenberg, which pushed the totalitarian impulses of communism, fascism and Nazism into the role of a midwife barely one decade after the war. After twenty years of interwar armistice, Nazi Germany and Soviet Russia set the world ablaze yet again, propelled by a drive to replace what remained of the old world with one defined by a set of collectivist absolutes that produced Stalinist and Nazi horrors, killed millions and completed Europe’s devolution from being the center of the world’s civilization into the ultimate prize in Cold War great-power competition.

Today, America is feeling the impact of what its elites unleashed during its own “fin de siècle” of the 1990s after our victory over the Soviet Union, driven as in the past by an unprecedented ideological hubris that spawned a revolutionary change in the economy, the recompilation of our class structure, and ultimately an emerging shift in global power distribution. Much like earlier in Europe, the American fin de siècle sowed the seeds of a grand ideological upheaval, as globalization, the off-shoring of manufacturing to China and the consequent deindustrialization of the country deconstructed the societal bonds and drove the recompilation of American national identity. Not unlike the industrialization of the imperial era in nineteenth-century Europe, globalization fractured established communities, with the ever-greater polarization of wealth and influence between the haves and have-nots in full view. The decision to offshore manufacturing in the 1990s in order to take advantage of cheap labor in Communist China set in motion what is today in effect the “feudalization of America.” In 2015, the middle class became a minority and has been losing its standing ever since, sinking into impoverishment as coronavirus lockdowns wreak havoc among the country’s small business and wage earners. The second powerful driver of change at work in America since the 1990s has been the deconstruction of a shared American national identity, with the centrality of citizenship and an attendant sense of the mutuality of obligation fast vanishing from public life.

The unbridled triumphalism of our business and policy elites at the end of the Cold War broke the bond between liberalism and nationalism that has historically defined the American nation and the Republic. Since its inception, the country has rested on a carefully negotiated balance between the liberal values of individual liberty and economic independence on the one hand, and the recognition that the unquestioned allegiance of each citizen to the nation, on the other, are the sine qua non of the country’s systemic stability. Additionally, the country’s democracy and prosperity are supported by this stability. The 1990s fin de siècle’s borderline religious avowal of the principle of liberalism above all else has ruptured that delicate balance, making reasoned debate about borders, immigration, the national economy, and the country’s heritage all but impossible.

America’s post–Cold War era has been shaped by the liberal hubris of its fin de siècle—an age of American unchallenged hegemony but also a time when the nation’s economic power that took generations to accumulate was wagered on an imperial whimsy predicated on a misreading of what the implosion of the Soviet Union heralded for the world. The end of the Cold War was cast as the unqualified triumph of liberalism, and the final adjudication of the mantra that institutions always trump culture. The liberal “end of history” era that presented itself as the final consummation of the market principles cum individual will (in the shibboleth of “do as you please”) in reality proved to be one of the most ideologized and thereby destructive in American history, fed by the specious argument that our values and institutions are not a product of our historical evolution, but rather something akin to a natural law of physics. It is this unprecedented liberal hubris that thirty years later, with the nation’s heady optimism of the 1990s but a vague memory, has left America with a sense of uncertainty and self-doubt unlike anything the nation has experienced since the years of the Great Depression, and with levels of the anger and division not seen since the years of the Civil War.

What makes the burden of the American fin de siècle misdiagnosis so heavy today is that these past three decades sowed the seeds of conflict that is unlike anything America has seen. China will likely challenge America’s supremacy within the next decade if not sooner, and Russia will seek to capitalize on the opportunity to revise the post–Cold War order in Europe and Eurasia. We have thirty years of ideological hubris to thank for it.

Andrew A. Michta is the dean of the College of International and Security Studies at the George C. Marshall European Center for Security Studies. The views expressed here are his own.