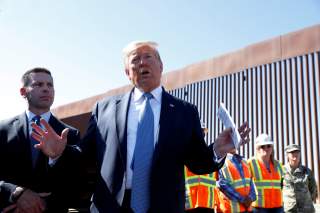 In 1909, Churchill argued that “It would be very foolish to lose England in safeguarding Egypt. If we win the big battle in the decisive theater, we can put everything else straight afterwards. If we lose it, there will not be any afterwards.” For the American People, however, the decisive theater is in Mexico and Central America, not the Middle East, Northeast Asia, or Eastern Europe. And, if we lose the war on the Rio Grande, then there will be no afterward for the United States.

Criminal violence inside Mexico is out-of-control. Prior to this year, 2018 was considered the most violent year in Mexico’s history, with over 33,500 murders, the highest reported number since records began in 1997. However, 2019 is sure to be worse. Whereas roughly 67 percent of U.S. casualties in the last eighteen years in Iraq and Afghanistan resulted from improvised explosive devices or mines, more than 90 percent of Mexican citizens have died from small arms fire. By any standard, Mexico is at war.

Mexico’s Institutional Revolutionary Party (PRI) that ruled from 1911 until 1991 maintained the façade of law and order, but that façade has collapsed. The Mexican government is so inextricably intertwined with Mexico’s Drug Cartels it is difficult to discern where one begins and the other ends. Disentangling the cartels from Mexico’s corrupt government is like trying to understand Afghanistan without the Taliban. As a result, Washington’s hope of forging a meaningful partnership with Mexico to police the U.S.-Mexican border or suppress the Cartels is delusional.

Inside the United States, Mexican cartels employ a sophisticated distribution network that reaches millions of Americans with heroin, cocaine, methamphetamine, marijuana and fentanyl. The resulting loss of American life from illicit drugs has climbed to more than sixty thousand per annum. On top of these losses, Americans must add human trafficking, murders, kidnappings, carjackings, rapes and robberies that cannot be viewed in isolation from the disintegration of law and order in Mexico. In November of this year, eleven illegal aliens were arrested on twenty-seven counts of sexually assaulting children.

To these problems must be added the growing strength of Islamist Terrorist Organizations in Mexico. A captured Islamic State (ISIS) fighter recently recounted how the Islamic terror group is committed to exploiting the porous U.S.-Mexico border, including through contact ISIS-sympathizers already living in the United States. Given the undefended border, it was probably inevitable that Chinese intelligence agencies, like the KGB during World War II and the Cold War, would set up shop in Mexico.

Recent events have given President Donald Trump’s campaign promise to secure the chaotic U.S.-Mexican border new urgency. Short of a U.S. military invasion and pacification of Mexico itself—something neither Americans nor Mexicans want—the only way Americans can eliminate or mitigate the menace of drug-fueled violence, human trafficking and hostile foreign exploitation of Mexico’s chaos is to commit U.S. Army Ground Forces to the defense of America’s Southern Borders.

America’s eighteen-hundred-mile border offers Mexican criminal networks endless smuggling routes for illegal drugs, natural resources, arms and humans. Only the U.S. Army, the Coast Guard along with the support from the U.S. Air Force can secure America’s border with Mexico. The Army has a wealth of experience securing borders in Germany, Korea, Iraq and Afghanistan. It is now time to put that expertise to work on a national emergency that could easily metastasize into a proxy war with Mexico if drastic action is not taken as soon as possible.

To date, Trump’s desperate pleas for funds to secure the Southern Border have met with a mixture of scorn and disinterest—even willful negligence—from Congress. The U.S. military’s forty-two four-star generals and admirals have been universally silent about the escalating violence along the southern border. Instead, the top brass at the Pentagon and congressional leaders remain obsessed with sinking trillions into failed military commitments thousands of miles away to protect the citizens of other countries, not the American people. At the same time, investment in border defense against ever more massive waves of migrants and the unknown numbers of dangerous criminals and terrorists masquerading as asylum seekers or “undocumented workers” has been minuscule by comparison.

More to the point, America’s ruling class has profited handsomely from supporting these failed enterprises, so what does it care? Meanwhile, the American people are suffering the consequences; just ask the ranchers, the border patrolmen, police officers, public school officials, or the soaring homeless and unemployed workers massing in the streets of America’s major cities among others, victims all of America’s border war.

Col. Douglas Macgregor (retired) is a decorated combat veteran, a PhD and the author of five books. His latest book is Margin of Victory, Naval Institute Press, 2016.