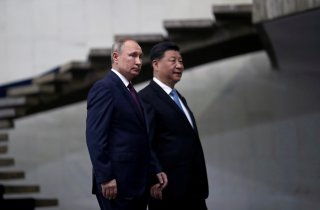 Here’s a bit of counterfactual history to ponder: How would the Cold War have played out if the United States had threatened and insulted Moscow and Beijing in equal measures, pursuing a strategy of dual confrontation that incentivized them to overcome Sino-Soviet rivalry and combine efforts against their common American foe? We can never know the answer. But contemporary Washington is providing glimpses into what might have been by pursuing just such an approach to our intensifying Cold War 2.0.

Although Washington has for years dismissed the likelihood and significance of Russian-Chinese cooperation, their relationship has improved more quickly and more deeply than most U.S. experts expected. As U.S.-Russian relations have soured, China has become Russia’s largest export market, and total trade now exceeds $100 billion annually. Military cooperation has evolved from Russian exports of second-tier weaponry in the 1990s and early 2000s into large-scale joint military exercises and sales of some of Russia’s most advanced equipment. Vladimir Putin announced last year that Russia has begun providing assistance to Chinese strategic warning systems, and the growing volume of joint publications by Russian and Chinese scientists suggests that cooperative research in areas too sensitive for publication might be growing, as well. Contrary to the American precept established by Nixon and Kissinger after the opening to China in the 1970s, Moscow and Beijing now have much better relations with each other than either has with Washington.

At first glance, it would appear that the circumstances for some repair work on the tattered U.S.-Russian portion of this geostrategic triangle are propitious. Russia has more confirmed coronavirus cases than any country but the United States, and its economy has suffered a severe blow from the impact of economic shuttering on global energy markets. The pandemic forced Putin to cancel World War II victory day celebrations, to postpone a referendum on his eligibility for additional terms in office, and to close the country’s border with China. And over the longer term, Russian experts expect Chinese power to wax relative to that of the United States, and U.S.-China tensions to mount. Growing Chinese assertiveness in the world could harm Russian as well as U.S. interests, and just as Moscow wants to avoid conflict with China, it also has no desire to get caught in the middle of a nasty spat between Washington and Beijing. Other things being equal, the prospect of a bit of U.S.-Russian bio-medical cooperation, coupled with reduced American zeal for sanctioning Russia’s economy, would hold some appeal in the Kremlin.

This combination of factors almost certainly helped to shape the Kremlin’s wary outreach to the White House in the early weeks of the pandemic’s spread. Moscow took a few exploratory steps in our direction, sending medical supplies to the United States at a time when China was clamping down on such exports. Putin held four telephone conversations with Donald Trump in the span of five weeks from late March to early May, focusing on the virus and energy markets, after having had only three calls in all of 2019.  The two presidents issued a joint statement commemorating the victorious meeting of Western and Soviet forces on the Elbe at the end of World War II.

But outside the Oval Office, the American response was tepid. Lawmakers on Capitol Hill introduced a bill calling for a new round of economic sanctions on Moscow. American media disparaged Russian medical assistance and did not even attempt to conceal their glee as Russia’s pandemic casualties went up and its economic indicators—along with Putin’s popularity ratings—went down. Washington announced its intention to withdraw from the Open Skies treaty, blaming Russian violations, and Trump’s special envoy demanded in a public statement that Russia press China into trilateral arms control negotiations or face an American arms race that would “spend the adversary into oblivion.” The clear implication was that, through U.S. eyes, the coronavirus moment called for strong-arming Russia into concessions and hastening the post-Putin era, not for joining forces against our common virologic foe and reducing the incentives for Russian-Chinese cooperation against the United States.

The net effect was predictable. Russia emerged as China’s most vocal defender against the United States calls for punishment of Beijing’s mishandling of the coronavirus outbreak, while China became an enthusiastic purchaser of Russian oil amidst the global downturn, buoying Russia’s vital energy sector. As the United States looked to step up pressures on Beijing, the Russian government announced that it would allow Russia’s sovereign wealth fund to invest in the Chinese yuan and Chinese state bonds for the first time.

One aspect of Russia’s response bears careful monitoring. Russia’s deputy foreign minister, Sergei Alexeyevich Ryabkov, who has for years been a steady and pragmatic hand in managing the vicissitudes of the bilateral relationship, veered uncharacteristically into public vitriol over Washington’s latest arms control gambits. On The Great Game, the Russian political talk show juxtaposing U.S. and Russian experts, Ryabkov specifically accused the U.S. Republican Party of tearing down international arms control treaties, and he later bluntly refused to “pull America’s chestnuts out of the fire” with Beijing. If Ryabkov can be considered a bellwether for Russian views, then his reactions suggest Russians are transitioning from sorrow into anger over U.S. policies and may be abandoning hope that Washington might seek mutually advantageous bilateral cooperation.

Is the opportunity to rebalance the geostrategic triangle between the United States, Russia, and China altogether gone? Probably not yet. As Alexsey Maslov, one of Russia’s top experts on China, put it in a recent online discussion, Russian-Chinese cooperation is driven not only by common interests but also by “common feelings” toward Washington—feelings fueled by perceived American insults directed at both countries. Implicit within this observation is the suggestion that a less offensive American tone might still pay some dividends in decelerating Russian-Chinese cooperation against the United States.

The alternative—a course based on the belief that the United States can and should prevail in a two-front reprise of the Cold War against both Moscow and Beijing—dismisses concerns that a deeply indebted and politically divided the United States cannot sustain an unconstrained arms race and that the combined capacities of contemporary Russia and China represent a much more formidable opponent than the Soviet Union once did. Are such dismissals valid? Our country has not had a serious debate about what such a course of dual confrontation might realistically accomplish and what dangers might attend it. But Washington—Trump’s own inclinations notwithstanding—nonetheless looks poised to launch a risky historical experiment in discovering the answer.