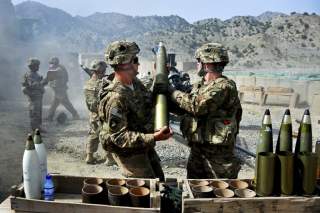 The use of military force is among the most wrenching decisions a democracy ever faces. Placing America’s sons and daughters in harm’s way in the name of our national goals requires discussions of the utmost seriousness and solemnity. And that’s why it’s a shame—and a terrible danger—that our national debates on intervention and the use of force have become exercises in mendacity and partisanship, characterized at their core by a desolate moral hollowness.

The disingenuousness of all sides when it comes to the exercise of American power is disheartening, even shocking. People who once cheered the immense risks of marching on Baghdad now pretend to cold-eyed pragmatism and caution. People who once denounced American warmongering now gleefully revel in the killing of terrorists. People who once decried the expansion of presidential power (including then-Senator Barack Obama) now defend almost unlimited war-making prerogatives, while others who once would brook no boundaries on the discretion of the executive have now found a new fascination with the War Powers Resolution and the role of Congress. The words “national interest,” once a source of legitimate and intelligent debate, no longer have content and are now used to denote things of which the speaker does, or does not, happen to approve.

Like so much else in our fractious, national political life, arguments over intervention are too often meant only to seek the debater’s advantage and to protect or hurt political leaders or partisan agendas. The imperative to win leads people who surely know better to say things they must realize are arguable, sometimes even risible, in military and strategic terms. “It’s too hard to strike Syria.” “We’ve made Putin pay a price for Crimea.” “China’s arguments with Japan are not our concern.” “We can stabilize Iraq.” Rarely is any of this meant to solve actual problems. Real solutions, after all, are the imperfect products of compromise: they entail taking risks, accepting costs and in general, conducting ourselves like mature and responsible citizens of a great nation instead of as partisans in a political shovel fight.

How did it all come to this? How can we be so paralyzed intellectually and militarily? Naturally, partisans have made up their minds and their answers are as predictable as they are unimaginative.

For many conservatives and Republicans, almost everything wrong in the world emanates from Barack Obama’s White House. It is true, even a truism, that every American president owns the events that happen on his watch, and President Obama cannot escape the consequences of an incoherent foreign policy, nor his responsibility for a great many of the global messes over which he now presides. But Barack Obama did not create the world of 2014 ex nihilo, and every decision he makes cannot be measured against some better but utterly imaginary world that never existed.

More than a few liberals and Democrats, for their part, manage to dodge hard questions on the use of force by resorting to what Georgetown professor Robert Lieber has called the reductio ad Iraqum, which treats all American foreign policy as merely a consequent function of the Iraq war. In this camp, no comment or thought on foreign policy is complete without the words “George Bush.” Of course, the situation in Iraq is undeniably Bush’s legacy (as is the Arab Spring, for better or worse). And of course, Bush made the fateful decision to destroy the Middle Eastern status quo. No successor was going to have an easy time dealing with that inheritance. But Bush’s name is now an incantation, a catchall excuse for every refusal to think about problems anywhere else. There are many more problems in the world than Iraq, and “George Bush” is not the default answer to all of them.

So who’s really to blame? It may not matter to political loyalists, but the fact of the matter is that our current travails are not solely the product of any one administration. Part of the answer lies in the end of the Cold War, the last unifying foreign-policy concept in American life, now gone for over twenty years. But all of America’s post–Cold War presidents have brought us to this impasse, including Obama, Bush and yes, Bill Clinton.

Clinton, in the name of political survival, eviscerated several constituencies in the liberal wing of his own party, including those who thought the end of the Cold War meant a “peace dividend.” If the liberals of the 1990s hoped that the end of the Cold War (and the consequent end of a dozen unbroken years of GOP control of the White House) would be reflected not only in lower defense budgets, but also in greater restraint on the use of American muscle, then they had to be disappointed. But Democrats could ill afford a challenge from the far left on Clinton’s policies, and so such opposition never coalesced.

Indeed, Clinton used military power practically at will, bombing at least four countries during his tenure. (It was Clinton’s Secretary of State, Madeleine Albright, who was dubbed “Madame War” by the Russian Communists, and for once, they weren’t that far wrong.) In doing so, he strengthened the principle that the Oval Office could conduct military operations at its own discretion, and reinforced the idea that cruise missiles and air strikes can solve a lot of otherwise sticky foreign problems. In 1999, Clinton led NATO to war with Serbia—an action I supported as the right thing to do—and established the principle that the United States would attack dictators who threaten our values, even when they do not directly threaten our interests.

If Clinton drew the map and brought the car to the edge of the chasm, George W. Bush is the driver who floored the pedal. He helmed a colossally dysfunctional national-security team whose arrogance was astonishing even by the standards of American exceptionalism. Both enraged and panicked by 9/11, he and his advisors led America into two wars, both of them (in my view) justifiable, but both soon derailed by experiments in building democracy dreamed up by people who, we later realized, had no idea what they were doing.

Beyond the operational excellence of the men and women in the U.S. military who fought it, almost everything else about the Iraq war was a complete mess. If there was a lesson to be learned about the political consequences of intervention, it could not be divined from watching Bush hand medals to some of the people who made some of the worst decisions. Most of Clinton’s military interventions were tepid half-measures that did little good, and about which Clinton himself seemed ambivalent. Bush, by contrast, doubled down hard against criticism.

No one, however, took the fight to the Bush administration’s partisan opponents more than his vice president, Dick Cheney. Even now, Cheney appears on television regularly to explain to the world that our current president is, essentially, a bumbler and a fool. This not only breaks with the precedent in which previous White Houses do not directly attack their successors, but at times transgresses the bounds of decorum, especially since Cheney excoriates Obama’s competence without the smallest tinge of irony shadowing his angry visage.

Not to be one-upped, President Clinton has charged into this partisan fracas. Also showing a thorough immunity to irony, Clinton—the man who first made the connection between Iraq, Al Qaeda, and weapons of mass destruction—has since retorted to Cheney that all the trouble in Syria today is because of decisions made by Cheney himself (and presumably, Bush) over a decade ago. Thus, the forty-second president has plowed ahead and directly answered George Bush’s vice president as though Barack Obama doesn’t even exist.

This politicization of decisions about the use of force has now spread to U.S. military leaders. Top officers barely bother to cloak their political preferences as military “advice,” and make their own gripes clear by speaking through retired senior officers. Many military officers who gladly supported the invasion of Iraq and other operations in the past now do not want any part of interventions led by the Obama administration, and so they (mostly through their surrogates) question whether we “can” engage in such enterprises.

Think about that for a moment. Military experts, active and retired, actually raise doubts about whether the U.S. armed forces, once structured to fight the Union of Soviet Socialist Republics for the control of planet Earth, might have a hard time bombing second and third string Arab armies embroiled in civil wars. This is where “we can’t” means “we’d prefer not to.” Military advice has become military advocacy, a silent but dangerous revolution in civil-military affairs that civilians have tolerated because they want to use military arguments to buttress their own. This is a terrible legacy that all three presidents of the post-Cold War era must share, because all of them encouraged it.

Meanwhile, the world refuses to coddle America’s strategic autism, often proving us wrong but never shaking us from our partisan-fueled delusions.

Consider Syria. We have comforted ourselves with arguments about how hard it would be to strike Syria as the price for killing thousands with chemical arms, thus relieving us of any responsibility. Meanwhile, the Israelis last month struck nine targets in a single day. (Israeli losses: zero.) But that hasn’t stopped us from congratulating ourselves on removing Syria’s chemical stockpiles—or so we think, anyway—so that we don’t have to reflect too much on the fact that the Syrian regime continues the slaughter with chlorine bombs. Only by the corroded standards of current American policy debates could anything regarding Syria’s chemical weapons program be considered a “success.” But it is a position that serves the political interests of disparate groups ranging from far-right libertarian Republicans to establishment Democrats.