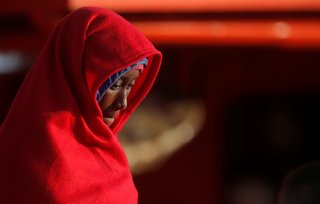 For the United States, China’s growing military and economic influence in the Horn of Africa, combined with the nagging threat of radical terrorism there, is a poisonous cocktail. In recent years, Beijing has wielded its infamous debt diplomacy to tighten its grip on the region. Meanwhile, Chinese soldiers deployed to Beijing’s sole overseas military base have harassed American troops who have acted as a stabilizing force in the region for years. And all too frequently, terror groups in Somalia threaten a radical recurrence.

A calculating actor, China correctly identified the Horn of Africa as a region of lasting global importance and invested accordingly. Beijing expanded its African footprint to increase control over logistical choke points, like the Bab al-Mandab Strait, and the flow of resources like oil, gas and water. The ability to influence the movement of those commodities, or commerce in general, can prompt conflicts or inflame existing ones. At the very least, it allows China to be a kingmaker.

Exerting influence is zero-sum game. China increasing its clout in the Horn of Africa necessarily means U.S. influence there is waning. But Washington need not compete dollar-for-dollar, or troop-for-troop, with China in order to reassert itself in the Horn of Africa. The mere act of standing for basic tenets of U.S. foreign policy, like promoting human rights and democracy, can reverse the destabilizing authoritarian backsliding in the region’s largest, and arguably most important, country: Ethiopia.

A U.S. partner that has played a vital role in Washington’s Global War on Terror, Ethiopia, under the leadership of Prime Minister Abiy Ahmed, is starting to look less like a fledgling democracy and more like China. Amnesty International reported in May that Abiy’s government has unjustly arrested around ten thousand people, and has executed thirty-nine others, including a sixteen-year-old boy. Paradoxically, Abiy’s henchmen have committed these crimes against the country’s largest ethnic group to which Abiy belongs—the Oromo people.

Viewed in isolation, the human-rights abuses themselves should be enough for Washington to stand up to Abiy. But ending the oppression of Ethiopia’s largest ethnic group—which happens to be overwhelmingly pro-American—in a country that could act as a bulwark against China’s global expansion, is undeniably in America’s interest. As the situation in Ethiopia stands now, there are three paths forward. One is the status quo, in which hundreds of millions of U.S. aid dollars go to a regime that oppresses its own people. The second would see Abiy cozy up to China—which he’s already done—and hasten Beijing’s expansion in a geostrategic region of the world. In the third scenario, Washington would pressure the Abiy regime to adhere to Ethiopia’s constitution and obey basic human rights standards, which are worsening in the country by the day, especially for the Oromo.

This repression of the Oromo community recently intensified following the still-unsolved murder of famous Oromo singer Hacaaluu Hundessa. When Hacaaluu was killed in June, it sparked protests, which Abiy used as a pretext to shut off internet access in the country and to jail his political opponents. Meanwhile, Abiy has indefinitely postponed Ethiopia’s planned 2020 elections, which would induce a constitutional crisis if his regime rules beyond October.

To say that Abiy is plunging Ethiopia into chaos to entrench his rule would be an understatement. To surmise that this would benefit China at the expense of the United States would be obvious. Fortunately, the United States possesses the necessary tools to reverse this course.

Ethiopia benefits from almost $1 billion per year in U.S. aid and Congress, through the Global Magnitsky Act, has given the executive branch the power to sanction human-rights abusers like Abiy. Simply put, Abiy cannot ignore U.S. demands, which should include: an independent investigation into Hacaaluu’s murder; the release of Abiy’s political prisoners; that Abiy immediately cease persecuting the Oromo; and the promise that, at the very minimum, Abiy will allow a unity government if elections will not be permitted by October. Each of those demands, if met, would shift Ethiopia from chaos to calm. And stability is the most basic prerequisite for any bilateral alliance to function.

Since the end of the Cold War, firming up U.S. alliances has never been more important for both Washington and its partners. The United States cannot advance its regional interests in the Horn of Africa if Ethiopia is in a constant state of turmoil, and Washington advancing its interests alone is looking to be increasingly difficult. In the aftermath of the coronavirus pandemic, the Pentagon has acknowledged that future U.S. defense budgets will need to be trimmed to offset pandemic-induced spending. With the Pentagon cutting back, the United States will increasingly need to rely on its allies to advance U.S. interests. To the extent that the United States competes with China for influence in the region, East Africans of all ethnic communities need to ask if they would prefer to partner with the country that encourages the blacklisting of human-rights abusers, such as the United States, or to join sides with a government that arrests its own ethnic minorities and places them on train cars leading to their enslavement, like China.

As ever, the Horn of Africa remains immensely important to the United States and is made more important due to interest from its adversaries.  For Washington, the Oromo people are a strategic partner in waiting, longing for the rights that for Americans are inalienable. Empowering the Oromo people by promoting their human rights would be a costless down payment that would return to Washington increased strength in a region it is currently losing.